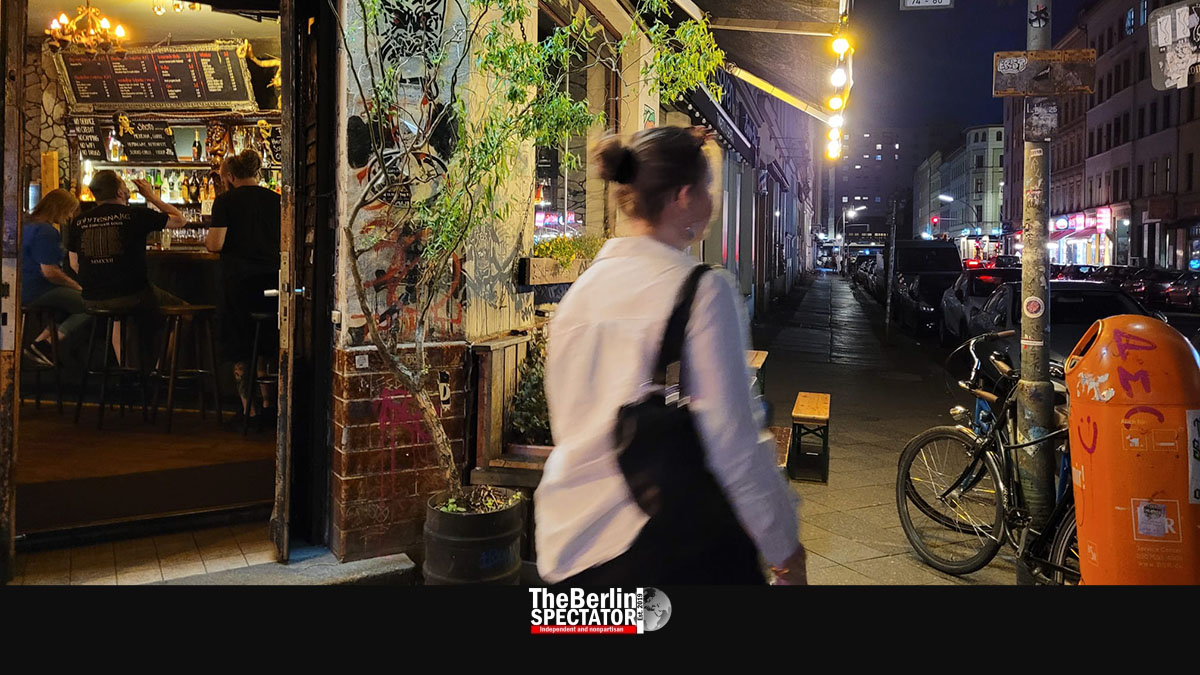 A quick Google search will tell you that Berlin is one of the world’s safest capital cities. While this may be true on paper, it doesn’t mean the city isn’t home to a surprising amount of gender-based aggravation and torment. By Erica Smith

Berlin, June 27th, 2022 (The Berlin Spectator) – Unfortunately, most women and people who present as female living in Berlin will likely have had the same experience of constant harassment and badgering as I have. Even sadder is that some perhaps will have had it even worse. Although this is an uncomfortable conversation to have for many reasons, it’s one that’s worthwhile in order to keep addressing a pertinent problem in our society. We owe it to all people who present as female – and in particular, those amongst this group in even more vulnerable positions, such as women of colour, and people who don’t fit into traditional categories of gender and sexuality – to keep giving this issue the attention it deserves.

What it’s Like to be a Woman in Berlin

The following events happened to me, on different days, since I came to Berlin:

09:00 hrs. – Wake up. Feel good about day. Check phone – 1 Facebook message and subsequent friend request. Open notification. Read message from unknown man 3 times my age telling me he likes my recent article. Oh, and that my profile picture is nice. Wonder if people enjoy my writing for what it is or just read my pieces because they like my picture.

10:30 hrs. – Leave home for class. Realise running low on cash. Walk to cash machine. See big group of men sat round chatting and laughing loudly. Feel intimidated. Fumble and drop my card. Catch men’s attention. Muttered request for me to join them. Politely decline. ‘But you have such nice legs… And…’ Laughter ensues. Walk off. Regret decision to wear a skirt and tank top even though it’s summertime.

11:15 hrs. – Arrive at university. Usual study spot full. Set myself up at a spare desk at my faculty building. Headphones on, determined to make the most of the day. 10 minutes in, a pat on the back. A man signals at me to take my headphones off. Give confused look but comply. Wonder if I’ve understood his German correctly when he compliments my eyes and asks me to meet for a coffee. Tell him thank you but I’m not interested and I need to work. He continues to pursue it. Tell him I’m not single and I’d really like to get on now. 15 minutes later still sat there, becoming more and more anxious as he continues his spiel about how when he went on his year abroad people became single specifically for it and why didn’t I do the same. Visibly nervous at this point. Eventually he goes on his way – with my number which I was too scared not to give him at the time. Block his number as he texts me and wonder how on Earth something like that just happened to me in a university building.

15:00 hrs. – Leave for home. Walk down U-Bahn stairs listening to music. See man walking in opposite direction to everyone else on platform. Think little of it. Get to platform and see man again – weird coincidence. Played on mind for a little too long now, though, so walk up to more populated end of platform just in case. Jump as suddenly same man appears right next to me mumbling in my ear. Complimenting my body and asking where I’m from. Heart beating fast. Nervous look towards other people. Politely remove myself from conversation as he holds hands up in mock defence. Stand closer to others. Text roommate shakily. U-Bahn arrives. Get on, and out of the corner of my eye see the same man walking the same way up the platform towards another young woman on her own as I speed past on the train.

19:00 hrs. – Exhausted. Have dinner plans with visiting family. Go out to meet them. Feel nervous going past the same station where I was approached earlier. Relieved to meet up with others. Start taking them to a bar I like. Walk down a narrow side street. A few men are gathered outside a Kneipe. Glad to be in company. Think little of walking behind them. Family walk past fine. Shouts as I follow, then a reached out arm. Brush past quickly to catch up with the others. Silently give thanks that my family don’t understand German.

23:30 hrs. – Leave bar and head in a different direction from the others to go home. Group of drunken men leer at me from the doorway of a bar. “Where are you going alone dressed like that? Come with us!” Pretend to ignore, but I heard it loud and clear. A bad ending to a bad day.

It is a hard truth that a woman living in Berlin can rack up enough instances of sexual harassment at different times of the day and in all kinds of situations that she can make a collage of them as if it were a full day in her life.

Removing the Blame from Individuals

As demonstrated above, sexual harassment happens here, in this city, regardless of the immediate situation or surroundings. This is really important to recognise. Granted, there are certain areas and certain times of day where the prevalence of these events is likely to be higher, but often, it really is impossible to predict. Unpredictability is one thing, though, and reflecting on the need for true accountability is another. It is repeated time and time again in liberal circles that because of this unpredictability, these repulsive events can’t feasibly be blamed on women and people who present as female. Whilst this makes logical sense, people need to remember this topic shouldn’t give rise to a mere discussion of logic but rather societal morals and ethics.

The fact is that these events shouldn’t be blamed on us. It doesn’t matter what we were wearing, and it doesn’t matter if we were walking in an unsafe neighbourhood at night time. Germany is a free democracy, and since when did that come to mean curtailing the liberties of half its population? When did it become the norm to blame the victims? The factor responsible for this aggression is the culture of toxic masculinity that raises men who believe this kind of behaviour is acceptable. Therefore, it is this poisonous outlook that needs to be addressed above all else, as it is what lies at the root of the issue.

It is true that there are a growing number of people who are starting to think in this way, especially in Berlin, and perhaps to them, this just sounds like yet another person repeating the same arguments into the progressive echo chamber. However, I for one have continued to be surprised that this simple level of critical thought stops the second I step foot outside of this circle. It’s certainly not easy for me to list all the most prominent instances of sexual harassment I’ve faced here, knowing my friends and family are likely to read this. Therefore, I write this in the hope of reaching people who have not yet taken the time to sit down and think about this situation properly.

Maybe you’re a man who’s never been confronted with this line or argument before, or maybe you just don’t believe sexual aggression and violence is really a problem in this day and age. Or even more likely, maybe you do know these things go on, but because it’s not you doing it, you think it’s not your problem. For one second, please put yourselves into our shoes and imagine what it’s like. Understanding the situation fully by emphasising with victims is key to breaking down the problem. And remember: Not calling out this behaviour when it happens counts as being complicit, and is just one step away from taking part in the harassment itself.