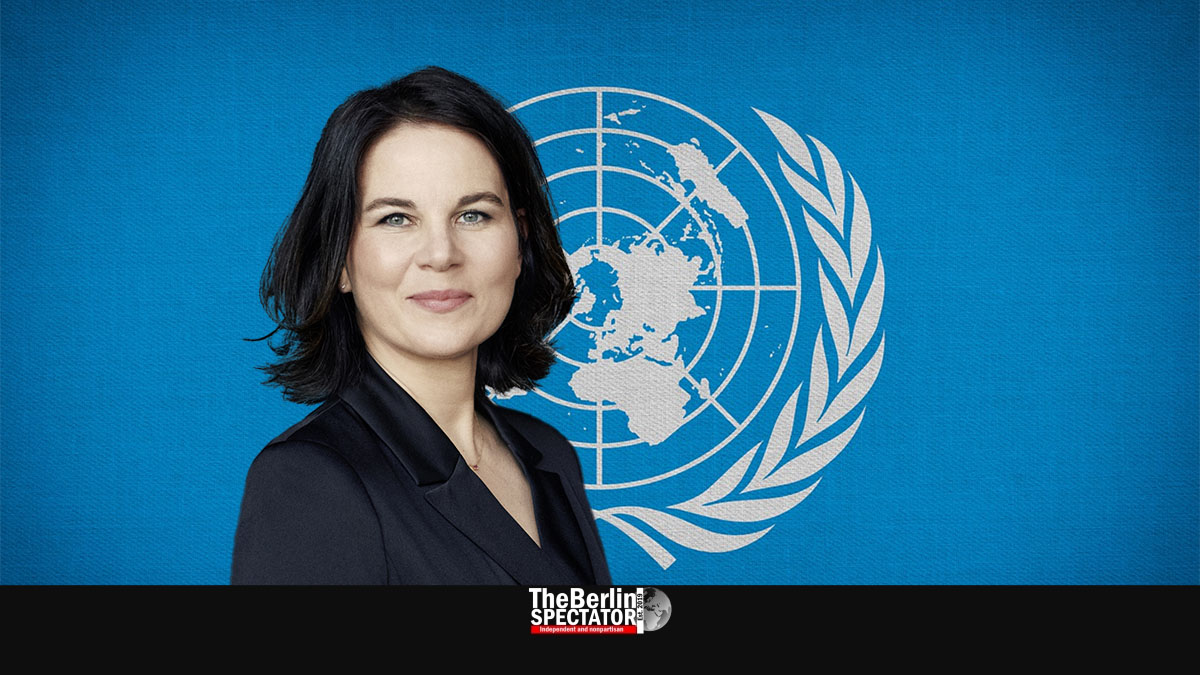 In New York, Germany’s Foreign Minister Annalena Baerbock slammed Russia for causing death and destruction in Ukraine, breaching the U.N. Charter and violating assurances it had given. She said Moscow was putting at risk everything the Non-Proliferation Conference had achieved in five decades.

Berlin, August 2nd, 2022 (The Berlin Spectator) — At the United Nations, the Tenth Review Conference of the Parties to the Treaty on the Non-Proliferation of Nuclear Weapons (NPT Review Conference) just commenced, decades after the end of the Cold War. In her speech at the event, Germany’s Foreign Minister Annalena Baerbock criticized Russia harshly.

“For more than five months, Russia’s war of aggression has caused death and destruction in Ukraine”, Mrs. Barbock said. “This war marks a turning Point. A permanent member of the UN Security Council is blatantly breaching the UN Charter and trying to subdue its smaller neighbour. In attacking a country that gave up nuclear weapons, Russia is brutally violating the assurances it gave in the Budapest Memorandum.”

Since the 24th of February, Russia had repeatedly “used reckless nuclear rhetoric” that was putting at risk everything the NPT Review Conference had achieved in five decades. “I welcome the fact that a great majority of states have condemned Russia’s aggression and its nuclear signalling”, the Foreign Minister from Berlin told the other participants. “That’s what we did here in this room, at the UN General Assembly in March, when 141 states condemned Russia’s war as well as its decision to increase the readiness of its nuclear Forces. Reaffirming this condemnation remains a matter of credibility for all those promoting serious efforts towards nuclear disarmament.”

Today, these efforts and the Non-Proliferation Treaty were facing an uncertain future, Annalena Baerbock stated. “When I told some people about my trip to New York to attend this conference, I was asked by many: What are you doing there? What’s the use of flying the flag for nuclear disarmament in times like These? Why are we here?”

She said the answer to those questions was simple: “We are here to defend the rules-based international order. The NPT is not just a piece of paper. It embodies some of the most fundamental commitments of humankind: To prevent the spread of nuclear weapons, to ensure nuclear weapons are never used again, and to work towards our common goal – a world free of nuclear weapons.”

The German Foreign Minister noted that the NPT Review Conference had already been delayed by two years, because of the Corona pandemic. Now, the world was standing at a crossroads: “If we take down the flag of nuclear disarmament today, the NPT and all it stands for would be dead. So we are flying its flag not because it’s easy – but because it’s necessary.” Much was at stake, also for future generations, she stated. “I am not naïve”, Mrs. Baerbock said. “We will not overcome all obstacles at one single conference. But we can stand our ground and uphold the principles enshrined in the NPT. That is our urgent Task.”

Then, she told the conference about a 82-year-old man she recently met in Nagasaki who had driven this message home last month. “He is a survivor of the catastrophic atomic blast of August 1945. He told me about the glaring light of the explosion, about his family members and friends dying. About family members and friends dying afterwards, year by year, because of cancer. His experience stands for the horror of hundreds of thousands. And I include the many victims of nuclear testing in the decades afterwards. This man said to me: ‘Make sure humans must never again be hurt by nuclear weapons’.”

“And if we can move just an inch closer to that goal here in New York during the next weeks, that will be worth every effort – and that is why we are here this month”, Annalena Baerbock added. “To uphold our belief in an international peaceful order. With this in mind, I see four priorities for us as we seek to advance the NPT’s agenda.”

Minister Annalena Baerbock concluded her speech by saying many had doubted what the NPT could achieve when it had entered into force more than 50 years ago. “Against many odds, it helped create a more stable global order – and a more peaceful life for an entire generation. But as today’s challenges show, these successes rely on the good faith and united efforts of all the treaty’s parties. These successes rely on us.”

The German Foreign Minister conceded the chances for a successful NPT Review Conference could be smaller than ever. But there was too much at stake to give up. “Now is the time to defend what the generation before us has built. Now is the time to stand strong for our peaceful international order.”