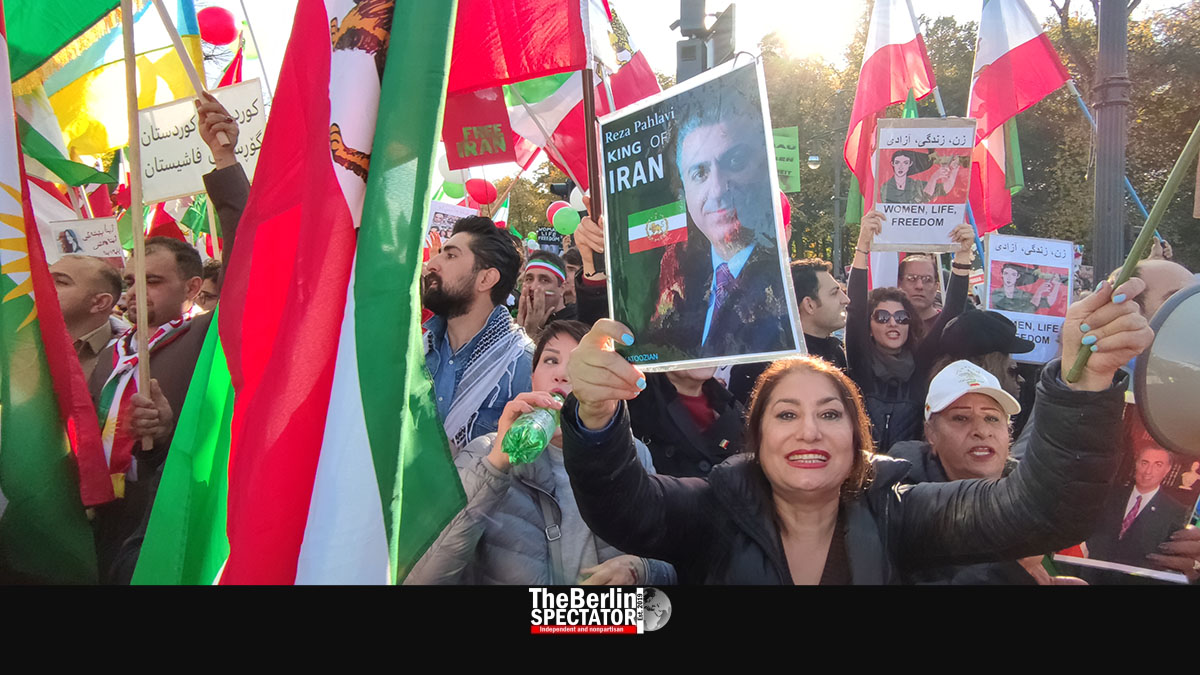 At a huge rally in Berlin, Iranian exiles, German Iranians, Germans and people of other nationalities demanded freedom for Iran today. They showed solidarity with the people there, who have been on the streets since Mahsa Amini was murdered.

Berlin, October 22nd, 2022. Update 8:15 p.m. CEDT (The Berlin Spectator) — The Kurdish flag dominated a big demonstration against the Iranian regime in Berlin today. An hour before the rally was supposed to commence at the Victory Column, thousands of protesters already were on site. Dozens of marshals in yellow vests sent the crowds to the corner of Hofjägerallee and Grosser Stern. At some point, the giant crowd moved towards John Foster Dulles Allee and Brandenburg Gate. From there, the rally was supposed to return to where it had started.

The tens of thousands of participants who took to the streets want freedom and an end to the reign of the Teheran regime. Not only is it oppressing and terrorizing Iran’s women and minorities, but spreading terror abroad as well. The protests in Iran itself were triggered by the death of Mahsa Amini, a 22-year-old woman who was murdered by the regime’s notorious ‘morality police’.

When today’s demonstration in Berlin began, the Berlin Police Department said there were 37,000 participants. The organizers, a group called Iranian Germans for Justice and Human Rights, and another one known as Woman Life Freedom Kollektiv, expected some 50,000 protesters. In the evening, the police confirmed 80,000 people took part. Many came to Berlin from other cities in Germany for this big event. Hamed Esmaeilion, a prominent Iranian activist, was among the organizers too. He was supposed to speak to the crowd.

At the Victory Column, thousands of Iranian Kurds were chanting in a sea of hundreds of flags and signs in Kurdish and Persian. The comparatively few German protesters who wanted to show solidarity with the women of Iran as well, gathered at a different location with their signs. They seemed a little shy and quiet, compared to the loud crowd of Iranian exiles.

The Berlin Police Department was busy again today, also because this protest was not the only one. At 6:00 a.m. this morning, officers had started closing streets around Brandenburg Gate and the Victory Column as well as in the government quarter, where the Chancellery and the Reichstag are located. Security was tight, in spite of the fact that the police did expect a peaceful demonstration.

At the Victory Column, the size of the crowd of protesters was impressive. So were the colors of those flags in the sunlight. Some participants held signs in English. While most of them said “Women, life freedom”, a young man had a more unconventional sign that said “You f*ck with the wrong generation”. Yet another sign said “Support Iran’s democratic voices”. One lady was holding one with a photo of Reza Pahlavi, the son of the last Shah of Iran. Today’s protest in Berlin was not the first one for freedom in Iran since the murder of Mahsa Amini in September, but the largest one.

Note: More photos of this protest, and a short video, can be found on The Berlin Spectator’s Facebook page.