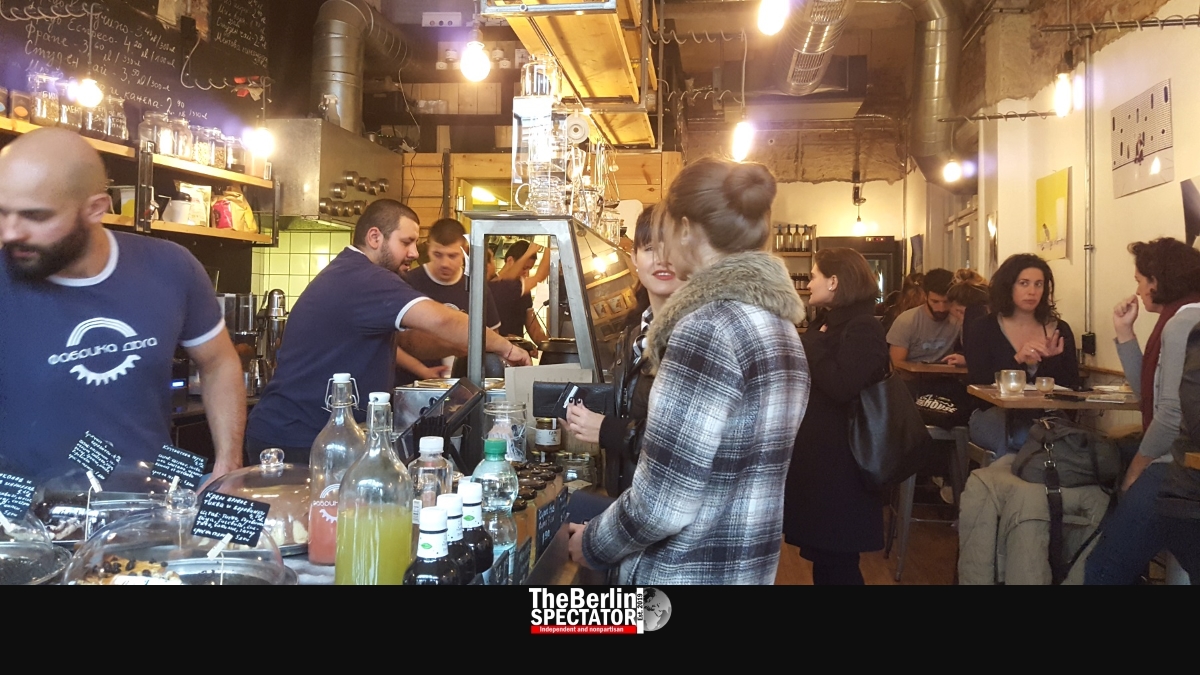 Sofia is one of the oldest cities of the continent. Hardly any capital offers the kind of history the Bulgarian capital has, or the number of severe problems. Which capital has an impressive mountain range right next door? Sofia. Which offers ‘Hollywood Light’? Sofia.

Getting to Sofia is easy. From Western Europe, just hop into that vehicle, power up those eight cylinders and head southwest. Keep on driving, even when you think you already overshot it. At some point, just before the Serbian town of Niš, you need to turn left or east.

Away from the Rising Sun

From Istanbul it should be the northwestern approach, for 550 kilometers. From Burgas, just race down Trakia Freeway, away from the rising Sun, for three hours. Sofia will be right in front of you. Enjoy. Just don’t breathe too much.

Sofia is terrible and wonderful, unhealthy and inspiring, loud and romantic, ugly and a great sight. It is the place to be, to those who have to, the place to leave as soon as possible, to some, and it is home to many.

This city, which was called Serdika thousands of years ago, is turning hipper every minute. Far more hipsters roam the streets today, compared to fifteen years ago. Back then the hardly existing, tiny middle class had to deal with existential questions such as “How in the hell will I pay my next rent?”. It is hard to turn hip in that kind of situation.

Today, hip youngsters work at the Business Park in the south of the city or they study at Sofia University. For lunch they would go to Fabrika Duga in Veslets Street, one of the few hipster-compatible places in Sofia. Here they have the choice between “home-made” cake, hot asparagus soup and unidentifiable things with lots of herbs on top. Their politically correct food actually tastes well.

The hipster males with long beards and Led Zeppelin t-shirts somehow look less natural than the women with the most colorful chains and blouses. But they all seem to be very nice people. The existence of hipsters in a city is a sign for progress. Also they are usually peaceful.

Mayor Yordanka Fandakova and her people at Sofia Municipality are pushing for progress. They are using funds provided by the European Union and they need to. Because of the lack of a traffic policy for several decades things need to be changed, repaired and built, such as the third metro line, which will supposedly be up and running towards the end of 2019.

Fish Does Not Kill

Any measures that might help improve Sofia’s air quality need to be implemented urgently. In most other European cities, the alarm bells ring when the particulate matter concentration in the air reaches 40 to 50μm, which is already an unhealthy level. In Sofia, levels between 150 and 1,300μm (not a typo) are frequently being measured in winter. This means that Sofia’s breathing air literally kills.

But fish doesn’t. Neither do the cherries, the clothes, pots, pans, herbs and honey jars offered at the Women’s Bazaar in the center of the city, a great place for a fruit eating break or for shooting photos.

The big synagogue is located some 200 meters down the street. It is one of the meeting points for the small Jewish community, the place for Shabbath and high holiday services and a place to look at for tourists. The history of the Bulgarian Jews is more than interesting.

Along with the large mosque and two churches, the synagogue is part of the so-called Triangle of Tolerance. Harmony would probably not be the right word, but these temples belong to three religions (or four, depending how they are being counted). The congregations seem to be accepting each other.

In recent years, the only acts of hostility, including verbal and physical violence, came from far right parties and groups who did not want to hear the Mufti’s prayers through those loudspeakers on top of the minaret.

The largest temple in the city and the country, by far, is located on the other side of the center of Sofia: Aleksandar Nevski Cathedral. It is Sofia’s main tourist attraction and belongs to the Orthodox Christians, which make up the largest religion in this predominantly atheist country of Bulgaria.

Sofia is a lot older than any other capital in Europe. It has been an area of continuous human habitation since the 8th millennium BC, which is a lot easier to believe while looking at 4000 year old walls and other stones at Serdika metro station or at the Museum of Archaeology.

There is so much history in Sofia, especially under the ground, it even annoys people. Whenever a large new building is being erected, workers find parts of ancient walls or even old treasures. They usually have to halt their construction until archaeologists invade the site with their little shovels, spoons and toothbrushes, in order to examine the finds.

Depending on what exactly they find this sort of thing can delay the completion of a building by a year and completely screw up the architectural plans. In some cases, the Ministry of Culture orders building owners to integrate pieces of city walls or other finds into the object they are erecting.

What its inhabitants are concerned, Sofia, this city with this beautiful name, is probably the least international capital in the European Union. Thanks to budget airlines, quite a few tourists show up for weekend trips though.

The Diplomatic Corps is obviously made up of foreigners. The cultural institutes, some schools and some companies employ people from abroad. Also there are some foreign students. But the community of foreigners is tiny, in comparison.

Hussein B. is one of them. The Syrian lawyer is one of the few refugees who decided to stay in Bulgaria and one of the few foreigners running a small business. He offers duner kebab with built-in French fries and excellent felafel close to the corner of Vestelts Street and Czar Simeon Street.

Surface of the Moon

All over Bulgaria, poverty is a huge problem. Most Bulgarians of Romani origin are jobless, uneducated, excluded, and they are being discriminated. Pensioners are in trouble too. Most of them have to live on the equivalent of about 100 Euro per month, which is just impossible. Many sell chewing gum, honey or flowers on markets or on the street, in order to collect a little more money for food, heating bills and medication.

A teacher at a state school in Sofia will earn about 400 Euro per month, a police officer 350 to 500 Euro, depending on his rank. A call center agent who speaks two languages might earn 750 to 1200 Euro.

The infrastructure is slowly improving. Even recently, central boulevards and intersections were hardly drivable since they were full of huge potholes, thousands of them. For decades, nobody had really cared. Recently, Mayor Fandakova started dealing with those issues. While lots of small streets still resemble the surface of the Moon, many main boulevards are fine by now.

Back then, fifteen years ago, the entire city was full of stray dogs. They would control Sofia’s city center at night and attack pedestrians. Some people were even killed. Today, there are still hundreds of stray dogs in the outskirts. NGOs, such as Animal Rescue Sofia, accommodate and neuter many dogs, and ship some of them to Western Europe. Some are lucky enough to find new homes there. (Read separate article ‘Unlimited Love at a Dog Kennel in Bulgaria’).

Sofia has the best and the worst places on Earth. There are so-called hospitals which resemble trash dumps more than anything. On the other hand, there are seven major shopping malls which seem very American and offer all the brands available in Western European cities.

In the Fakulteta quarter, Sofia’s Roma slum, families live in Third World conditions. On the other side of the city, at the foot of the Vitosha mountain, some of the richest Bulgarians have built themselves palaces with the most luxurious interiors imaginable. Sofia is definitely a city of extremes.

One of the most special places in Sofia is located in the expensive Boyana quarter as well. At Nu Boyana Film Studios, they offer all the services Hollywood is known for, but for a fraction of the price. Big movie shoots, even in the center of Sofia, are a regular occurrence. Nobody should be surprised when they meet Morgan Freeman or Gerard Butler in the Bulgarian capital.

Compared to Western Europe prices in Sofia are low. A decent meal at “Happy” costs around 6 Euro, or 8 Euro with drinks, unless Sushi is involved. Rents are low as well while energy costs are almost the same as in other parts of the continent and too high for many residents whose salaries are scandalously low. Because of that aspect, the low rents are actually high from the perspective of most Bulgarians.

Using the public transport in Sofia is an adventure. They have purchased tens of new buses, with WiFi and air conditioning, and some new trams, but there is nothing like being stuck in traffic on an old bus at 42 degrees Centigrade (above 100 degrees Fahrenheit) along with 100 other passengers. Even the most modern trams, 28 of which are gifts from Switzerland, need to slow down to walking speed because the state of the tracks is so terrible it damages the vehicles.

Sofia isn’t Budapest or Prague. It isn’t Bucharest either. But, because it is still kind of exotic, because it has a good night life (except in summer) and since there is so much history, it is worth a visit, even for hipsters. In the area around the little Doctor’s Garden park, there are two more places which offer “home-made” vegan cake or similar treats. At those cafés, the only Janis Joplin CD they have would be played over and over again.

Welcome to Sofia, at the southeastern edge of Europe. You say your capital is old? Think again. Sofia is the city in which no means yes and yes means no, also since shaking one’s head stands for “yes” and nodding means “no”. It is the place where you need to lay down on the street in order to be able to purchase a can of Coke through a basement window.

Sofia is the place where the strong win and the poor are largely being left behind. But it is also the sexy capital hardly anyone knows, and the spot with thousands of years of history. Enjoy it. Just don’t breathe.