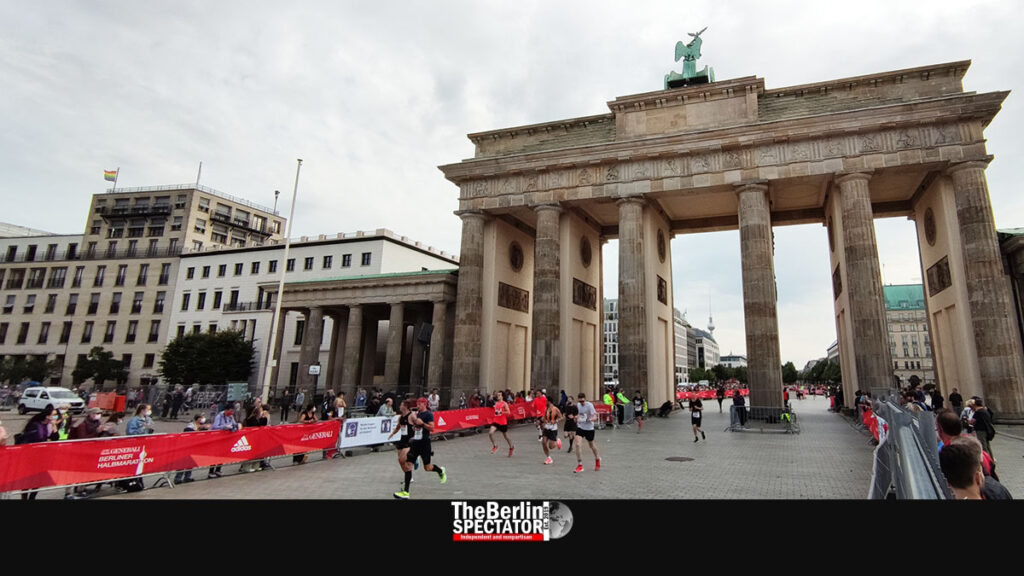 There are runners who are lightning fast. Many of them will be taking part in today’s Berlin Half Marathon. Because of the event, the German capital’s entire city center is closed to motorized traffic.

Burgas, Bulgaria, April 3rd, 2022 (The Berlin Spectator) — Today, the Berlin Half Marathon will be dominating Berlin. Half Marathon? Does this mean the participants will be half as fast? It is probably the opposite because they can use up all the energy they have on 21 kilometers (13 miles) instead of the usual 42 (26 miles).

At 10:05 a.m. CEDT, the race is scheduled to begin at Strasse des 17. Juni. As many as 32,267 runners from 121 countries registered, and only two can win, one female marathon heroine and one hero. Before they win, they will have to get going and make sure they do not get lost along the way. First, they will have to run to Charlottenburg Palace, take a sharp left and continue on to Lietzenseepark.

Some runners will already be exhausted at this point, others will just get warmed up when they take another left into Neue Kantstrasse. Those who are still part of the race after 7.5 kilometers (4.7 miles), should not forget to take a right into Windscheidstrasse, cross the train tracks and get to Kurfürstendamm. Here, they will already be sweating like horses when they run westbound for a while, until they get to the intersection with Johann-Siegesmund-Strasse. Here, they will have to take a u-turn and go back.

By the time they reach the luxury department store ‘KaDeWe’, they will have covered only about half the Half Marathon. Via Potsdamer Platz, Checkpoint Charlie, the Berlin Palace and the Foreign Ministry, the runners are supposed to keep on going around Gendarmenmarkt square on their way to Unter den Linden boulevard, where they will be running past the Russian Embassy and right through Brandenburg Gate to the finish line.

There are several runners from Kenya who are almost as fast as a Boeing 747 during its takeoff run, including Abel Kipchumba, Eric Kiptanui and Alex Kibet. Sifan Hassan from the Netherlands is one of the fastest women, but so are last year’s Berlin half Marathon winner Joyciline Jepkosgei and Sheila Kiprotich Chepkirui. Will today’s race be suspenseful? Definitely.

Some participants use the Half Marathon in the German capital as a preparation race for the Hamburg Marathon which is scheduled to take place on April 24th, 2022. The Berlin Marathon, which probably is the most important event of its kind in Germany, will take place on September 25th. So, there are lots of races to lose. But being part of them must be a great experience anyway.

Did anyone say “Corona”? We just did. According to the organizers of the Generali Berlin Half Marathon, which is the event’s full name, there are no Corona status checks this time. But FFP2 standard masks have to be worn. Participants may remove their masks as they cross the start line. Once they reach the finish line, they are required to put them on again. Of course they may catch their breath and drink something first.