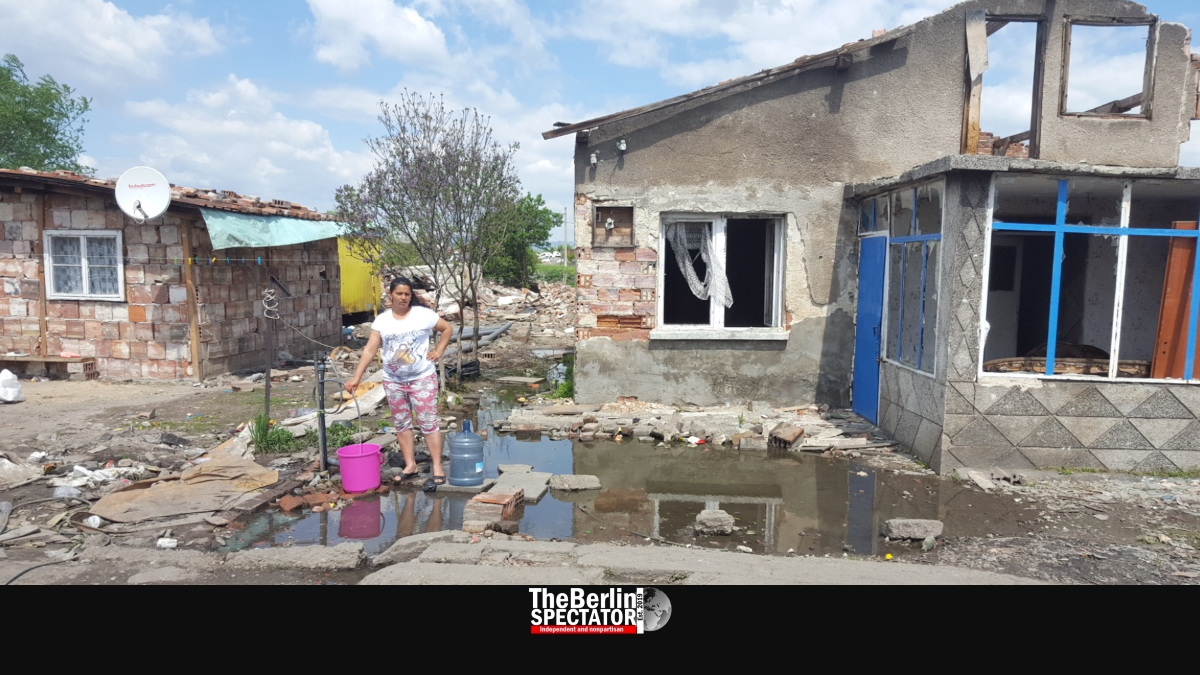 Bulgaria’s Roma have been discriminated against in their own country for decades. Instead of support, hatred is what they are getting. The Corona pandemic has made things even worse, says Krassimir Kanev.

Sofia, a city of 1.5 million inhabitants, was a popular destination for Western European tourists before Corona hit. Those visitors photographed the giant Nevski Cathedral from all angles. They looked at 4,000-year-old stones at the ‘Serdica’ metro station and walked up and down Vitosha Boulevard, where they also consumed beverages and inexpensive meals.

Welcome to the E.U.

Bulgaria does not show certain parts of its capital to tourists. Even most locals do not know Fakulteta or Orlandovtsi, the two main Roma slums. What British, German, French or other visitors would see in those parts of the city, if they went there, looks like it was part of some banana republic. But Fakulteta is actually the European Union. Bulgaria joined on January 1st, 2007.

In those parts of Sofia, which nobody in Bulgaria wants to see, hear or think about, children wearing dirty clothes play in the mud. Many families live in huts without heating or sanitation. Most residents of the worst parts of those slums are not educated well or at all. Only few have jobs. And they are being discriminated in all walks of life.

Helping its Roma by jump-starting integration, job and education programs is an approach Bulgaria does not consider. This Eastern European country goes the opposite way. The racism against Bulgarians of Romani origin is unbearable. Collective punishment, illegal incarceration in their slums, and even ethnic cleansing is what Bulgaria’s Roma have to endure.

Many non-Roma Bulgarians, including intellectuals with progressive views in other contexts, come up with the same sentence over and over whenever the discussion turns to the country’s Roma: “They are lazy, they do not want to work and they stink.”

This flat-out lie is a scandalous attempt to tar all Bulgarians of Romani origin with the same brush. Most non-Roma citizens say integration was not an option, even though it is the only one. The truth of the matter is that Bulgaria has an enormous racism problem which also surfaced during the refugee crisis. Asylum seekers who came to this country were treated in a terrible way.

What the Bulgarian Roma are concerned, hardly anyone helps them. A handful of organizations run good projects, including in those Roma slums. One of the most important non-governmental organizations in Bulgaria is the Bulgarian Helsinki Committee (BHC). Krassimir Kanev founded it decades ago, when absolutely nobody else supported certain population groups.

Helping Roma and other minorities such as the LGBTI community in Bulgaria draws even more hatred. Krassimir Kanev himself was beaten up by an unknown attacker in Sofia two years ago. The amount of hate speech the BHC is being targeted with in social media, and even in what Bulgaria calls regular media, is unbearable.

Before the ongoing global crisis, Bulgarian authorities targeted the Roma for crimes individuals were accused of. Three years ago, Sofia Municipality felt the inner urge to flatten Orlandovtsi, an entire Roma neighborhood. It was a move that made hundreds of people homeless and nobody cared. The BHC brought the case to the European Court of Human Rights. It is still ongoing right now.

The Coronavirus led to even more hatred towards Roma, and a treatment which is not only completely unacceptable, but also illegal and disgusting. “The situation worsened during the Corona crisis, particularly for Roma children”, Krassimir Kanev says.

As it turns out, Bulgarian authorities effectively incarcerated thousands of Roma in their slums, while other Bulgarians could walk the streets freely. “It is not justified to impose a lockdown on people because of their ethnicity. But this has happened in many places within Bulgaria, including in Sofia”, Kanev states.

“Those lockdowns were ordered without any sanitary reason. It happened in Kazanlak as well, a town that did not have any Coronavirus cases at all”, he explains. Neither Roma, nor other Bulgarian citizens were infected at the time, in this small city located in Bulgaria’s beautiful Valley of Roses. “But the Roma neighborhood was sealed off from all directions”, Krassimir Kanev says.

According to him, checkpoints were installed. “The official reason was that the Roma had been ‘unruly’. The same happened in Nova Zagora and several other cities.” The inhabitants of Fakulteta, Sofia’s largest Roma slum, were locked up as well. “It was the only neighborhood in Sofia that was locked for several days.”

In the capital, the justification was that there were many Coronavirus cases in the slum. “But I have a friend at the Health Inspectorate”, Krassimir Kanev says. “He told me the number of infected persons in Fakulteta — percentage-wise — was not higher than anywhere else in Bulgaria. In such situations, Roma are usually the scapegoats.”

Children were — and still are — affected by this. Their families are often illiterate and poor. They can not afford computers. And even if they could, their daughters and sons would not have been able to participate in online classes offered by schools because Sofia and other cities do not provide network connections to Roma. “They were already discriminated against in the sphere of education before”, Krassimir Kanev stresses. “With the lockdown, it became even worse.”

“The Roma were perceived as a threat. So they were locked up. Nobody cared what was going on inside those Roma neighborhoods.” It’s not like anyone cared before. But just when the few critics of Bulgaria’s non-existing Roma policies thought things could not get worse, they did.

Kanev’s Bulgarian Helsinki Committee just filed a new case at the European Court of Human Rights. This one is about events that seem to fall into the category of ethnic cleansing. It happened in the village of Voivodinovo near Plovdiv, Bulgaria’s second-largest city. Here, all residents of Romani origin were expelled in January of last year, after an incident.

A special forces commander who was intoxicated got involved in a brawl with two Roma men who later said he had physically attacked them and they had fought back. The soldier, on the other hand, said the two Roma had attacked him. He was beaten up badly.

“The Mayor of the village and the Mayor of Plovdiv municipality decided to evict all Roma”, Krassimir Kanev says. “This happened on the same evening.” The Voivodinovo incident is another example for collective punishment against Roma. “They were told to leave the village immediately.”

Kanev explains, most of the Roma from Voivodinovo had left that night, at 10:00 p.m., including children and elderly people. The non-Roma residents had been mobilized against them. Football hooligans and other racists from all over Bulgaria supported the villagers who even organized marches against Roma.

The remaining Roma left the next day. Kanev: “They found refuge with relatives, some were hundreds of kilometers away. After one month, in February of 2019, they thought the situation had calmed down and decided to return, but were expelled again.”

Thanks to the BHC, the European Court of Human Rights not only agreed to deal with this case, but it also gave it a high priority. In addition, the court ordered interim measures for the most vulnerable among those who were expelled from that Bulgarian village, namely the elderly and sick. The court told the government in Sofia they should accommodate these people. But those in charge in Bulgaria refused to do so.

“As always, the justification was that the Romas’ houses had been built illegally. Whenever something comes up, this is the justification. But most of the affected Roma were actually born in those houses”, Kanev explains. “The latter were not constructed recently, but in communist times, by their fathers and grandfathers.”

There are many in Bulgaria who want to get rid of the BHC because helping minorities is not too popular down there. Prime Minister Boyko Borissov is heading a government coalition with extremist far-right parties that are known as the ‘United Patriots’. They dislike the BHC. What a surprise.

Some MPs of the VRMO, one of those radical parties, wrote to the Prosecutor General last year, saying he should ban the Bulgarian Helsinki Committee. He actually took steps in that direction, but pulled back at the last moment because there was pressure from Brussels. The LIBE Committee at the European Parliament defended Kanev’s organization. Of course, the former Prosecutor General knew any ban on the BHC would have backfired.

But the ‘United Patriots’ in Sofia do not seem to be willing to give up. Now they came up with a draft law which says all NGOs with funding from abroad need to be added to a special list.

There are many things and people those ‘Patriots’ hate. They made sure the Istanbul Convention was not signed by Borissov, who is a very special character himself. They are homophobic as well. And they hate refugees. But the ‘Patriots’ are not the only ones who do. The accounts of asylum seekers who said they were robbed and beaten up by cops and self-proclaimed “refugee hunters” in Bulgaria are just as shocking as the conditions under which most Bulgarian Roma are forced to live.

There are 750,000 to 1.5 million Bulgarians of Romani origin, depending on the source. For most of them, improvement is not in sight. But, thanks to Krassimir Kanev’s BHC and a few other projects, some justice is being done and the situation of some Roma is being improved.