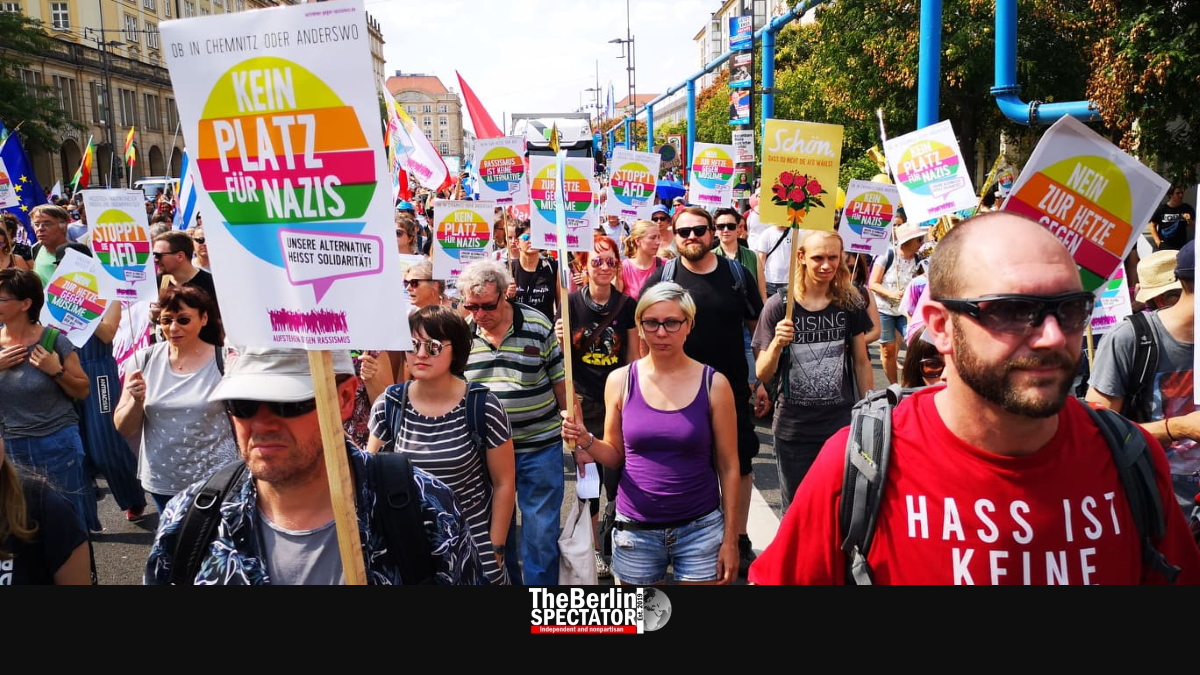 Today, thousands came together in Dresden, the capital of Saxony, in order to stand up against the kind of nationalism and racism the far-right party AfD is promoting. The rally took place a week before more than 3 million Saxons are eligible to take part in state parliament elections.

In Dresden, tens of thousands took part in a protest entitled ‘Indivisible’ (‘Unteilbar’) today. It was a rally against discrimination, racism, nationalism and the kind of message the extremist far-right party AfD (‘Alternative für Deutschland’) keeps on conveying. Numerous parties and organizations asked their members to join the protest.

The Saxon participants were joined by Germans from other cities and regions. Two special trains brought participants from Berlin. All of them fear a swing to the right, days before both Saxony and Brandenburg are up for state parliament elections on September 1st, 2019.

Democracy, Human Rights and social justice were not self-evident, but had to be fought for and defended on a daily basis, the organizers said. The ‘Indivisible’ movement wants to fight radical right-wing tendencies and “reject racism and contempt for mankind”. A “solidary society” is what the movement says it is standing up for.

Some three weeks ago, an ‘Indivisible’ protest took place in Leipzig. Today’s event in Dresden was supposed to be a lot larger, with supporters from all parts of Germany. Popular Germans bands such as ‘Silbermond’ were going to perform at the rally.

‘Saxony is Not a Brown Stain’

The organizers invited prominent personalities who were scheduled to hold speeches at the protest. They included Peggy Piesche, a Black German literature and cultural studies professor who grew up in the GDR, the former communist German state, and the author Carolin Emcke. The Verdi union executive Andrea Kocsis was going to be there as well, in order to take a stand against the far-right.

“Saxony is not a brown stain on the map of Germany”, the federal state’s Integration Minister Petra Köpping said at the event, referring to the color attributed to the far-right. It was important “to defend the values which are important to us”, she stated.

According to Minister Köpping, the protest was “an important sign”. She said the participants wanted to show that there were people in Saxony who solidarized with those who had been forced to leave their countries because of war and terror.

Michael Kretschmer, the governor of Saxony, commented on the protest by saying it was “good” to stand up for democracy and the state of law, but he did not take part. Kretschmer stated a governor and CDU chairman (the CDU is the conservative party of Chancellor Angela Merkel, which he is leading in his province) could not participate in a rally which included left-wing groups like the ‘Antifa’.