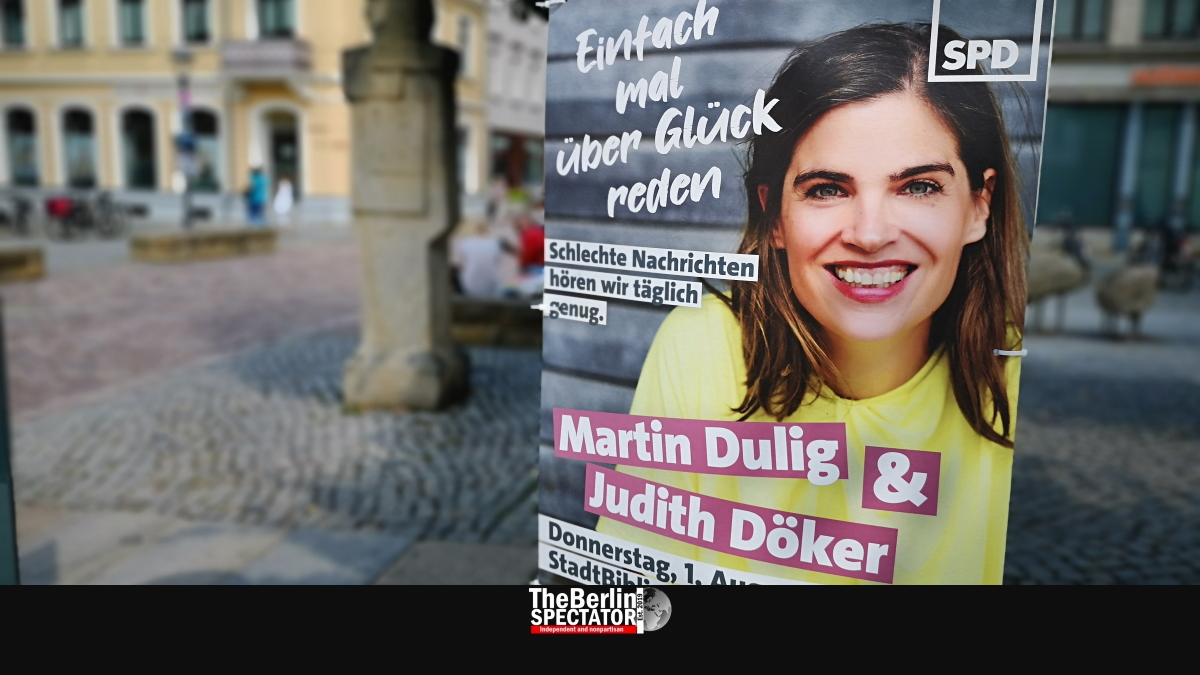 In Saxony, one of Germany’s 16 federal states, the elections for the state parliament in Dresden are coming up. On September 1st, many Saxons will vote for the extremist far-right party ‘AfD’, according to the polls. The populists might even win.

Walking through the picturesque Saxon town of Pirna will not only reveal medieval buildings and a lot of beauty, but also hopelessness. The Social Democratic Party of Germany (SPD) put up unconventional election campaign posters, in an attempt to seem upbeat. “There are enough bad news we hear about every day. Let’s talk about felicity”, they read.

CDU and AfD in a Race

Behind the scenes, felicity is not exactly what the Saxon SPD leaders are feeling, but rather desperation. That is because the catastrophic election outcome they got in 2014 will be even worse this time around. Eight percent of Saxons intend to vote for the SPD. If things go on like this, the Social Democratic Party might even be voted out of the state parliament next time around.

The Christian Democrats (CDU) on the other hand are relatively strong. Chancellor Angela Merkel’s party colleagues are in a race with the extremist radical right ‘Alternative für Deutschland’ (AfD). At this stage, it is unclear which of these two parties will be victorious on September 1st.

But, whatever the exact outcome might be, the AfD will not rule Saxony. It is a foregone conclusion that governor (‘Ministerpräsident’) Michael Kretschmer, a CDU politician who is heading a coalition with the SPD, will remain in office. But he will have to find an additional coalition partner or change his government completely, because the numbers will not allow a continuation of today’s alliance.

What the polls are suggesting is more than alarming. The Saxons, just like the Brandenburgers who are facing elections on the same day, will vote for the AfD in masses. About a quarter of all voters, possibly more, will ignore the fact that the populist AfD is considered xenophobic, racist and even antisemitic by its many critics, or vote for them because of those aspects.

They are either ignoring or welcoming the fact that the AfD’s leader in Saxony, Jörg Urban, is known for ugly racist comments about migrants. He also called the democratically elected government of Germany a “regime” he wants to “overturn”. Urban is one of the most extremist leaders the radical right AfD has.

“We want to govern”, Urban says. It remained unclear how he intends to build a majority in the Dresden ‘Landtag’. The other parties, including the CDU, have ruled out any cooperation with the extremists. While some CDU politicians in eastern Germany have called for an “open approach” towards the AfD, the CDU’s leadership in Berlin effectively forbade anything of the kind.

Grim Outlook for SPD and ‘The Left’

Ines Kummer, a city councilwoman from the Saxon town of Freital, told The Berlin Spectator her impression was that people were starting to wake up. She said some potential AfD voters had been shocked to read that a major candidate of the party had a long criminal record. She also stated she was being harassed by supporters of the far right because of her activism for refugees in Saxony.

On September 1st, 3.3 million Saxons have the choice between 19 parties. More than half of them will go for the AfD, which will either be the strongest or second-strongest party, and the CDU. The Christian Democrats may reach 28 percent, as the latest polls show.

‘The Left’, which used to be extremely strong in eastern Germany, might end up with 16, the Greens with 12 and the SPD with 8 percent in spite of the fact that prominent members from Berlin, such as Lars Klingbeil, are campaigning in Görlitz and elsewhere. Whether the Liberals will surpass the 5-percent limit they need for entering the ‘Landtag’ is unclear.

The situation in Saxony is definitely serious. Maybe talking about felicity, the SPD’s strategy, is just the right approach before election day. Why suffer heart attacks beforehand? There will be enough opportunity for that kind of thing after September 1st.