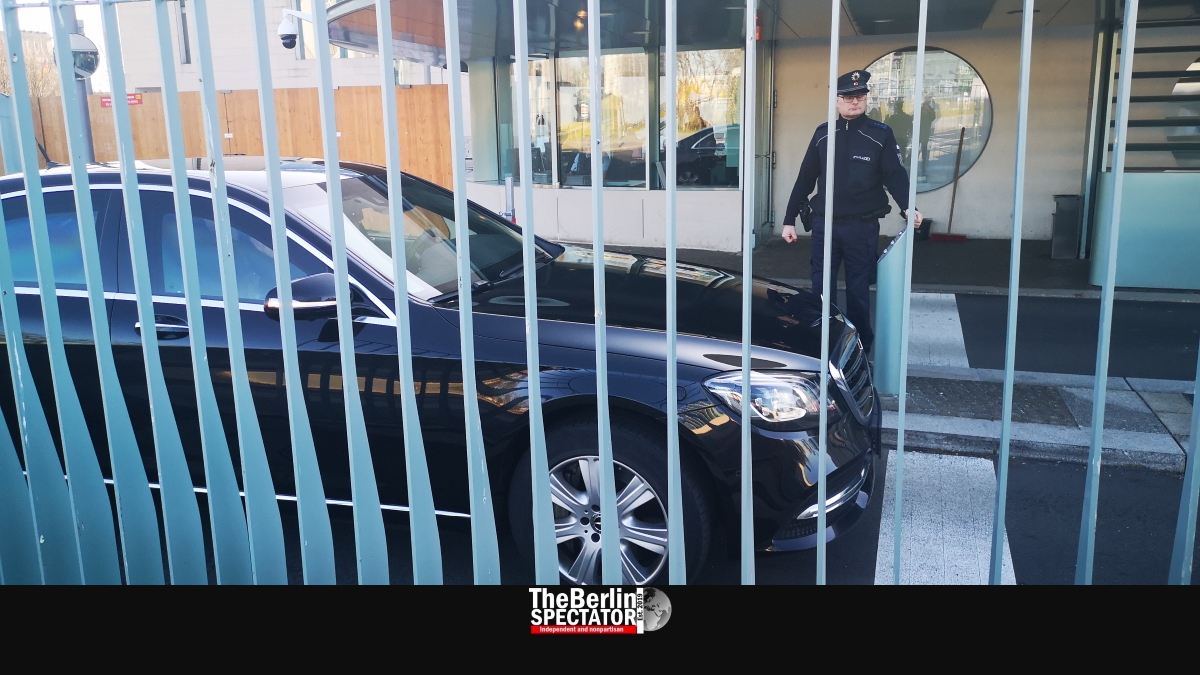 At the Chancellery in Berlin, Chancellor Angela Merkel and her coalition partners discussed the implications of Germany’s democracy crisis on Saturday. Around the corner, hundreds demonstrated for new elections in Thuringia.

In the late morning, several armored S-Class Mercedes limousines with police protection raced to the Chancellery. These kinds of vehicles are four times as heavy as their regular consumer versions. Their V8 engines need to produce a lot of thrust to move the excessive weight.

The subject Chancellor Angela Merkel, the CDU’s leader Annegret Kramp-Karrenbauer, the CSU’s party leader Markus Söder, Vice Chancellor Olaf Scholz of the SPD, his party’s Saskia Esken anf Norbert Walter-Borjans and others talked about was even heavier. Since the scandalous events in Erfurt earlier this week, the German democracy is in a crisis.

Merkel’s junior partner in her coalition government, the Social Democrats, had asked for the meeting. From the CDU, they demand statements on how the situation in Thuringia would be resolved and how the election of the FDP’s Thomas Kemmerich by his own party, the CDU and the extremist right-wing ‘AfD’ would be annulled as soon as possible. Kemmerich officially stepped down in Erfurt during the Berlin meeting.

The SPD also wanted to know how the CDU intended to avoid any future cooperation with the ‘AfD’ in any federal state and on the federal level. High-ranking party members had slammed Annegret Kramp-Karrenbauer for failing to repair the situation.

Mike Mohring, the leader of the CDU in Thuringia, who is supposedly about to step down as well, is being accused of having planned Emmerich’s election with the ‘AfD’, and of putting his lust for power above the principles of his party HQ in Berlin. Not cooperate with the radical ‘AfD’ in any way is one of them.

The issue which started in Erfurt on Wednesday has already caused anxiety and mutual recrimination within the coalition. It had the potential to destroy the latter, according to several commentators in Germany. But the coalition partners agreed to call for the election of a new First Minister in Erfurt together. On top of that, they want new elections in Thuringia, for the voters.

Earlier, Merkel’s commissioner for Germany’s eastern federal states, Christian Hirte, had resigned, a few days after he had congratulated Kemmerich for winning the election at the Erfurt ‘Landtag’ “as a candidate of the political center”. Merkel reportedly asked him to go.

A few steps away from the Chancellery towards the Reichstag building, some 2000 Berliners had staged a protest against the extremist ‘AfD’ and for early elections in Thuringia. Speakers at the event blamed the FDP and the CDU for “having joined forces with fascists”. One speaker said what had happened in Erfurt was “sh*t”. Nobody at the demonstration disputed that statement.

Kevin Kühnert, the head of the SPD’s youth organization who is also part of the party’s board, said the events last Wednesday in Thuringia had happened for two reasons. One had been the ingenuousness of the politicians in the ‘Landtag’ in Erfurt who had failed to act responsibly. The other had been the “cheap calculus” of being voted into office by right-wing radicals. Both aspects disqualified any politician, Kühnert said.

Independents, Social Democrats, members of ‘The Left’, The Greens and ‘anti-fascist’ groups were part of the protest in Berlin. The participants were hoping the politicians at the Chancellery would hear their chants.