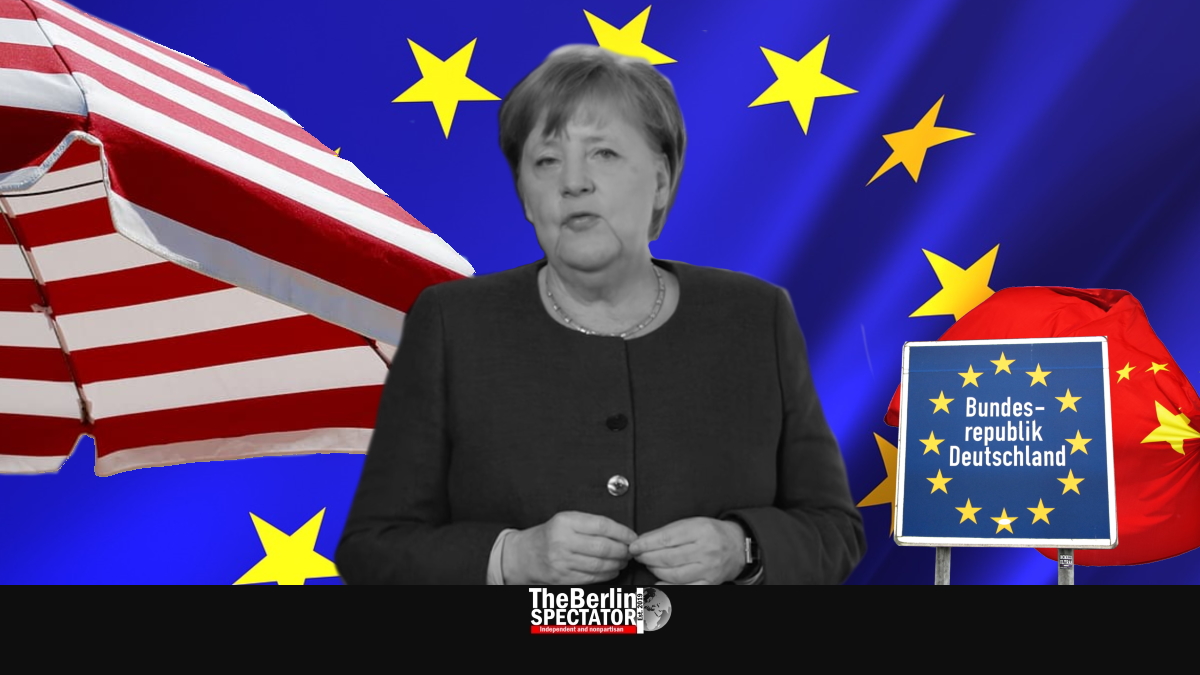 Chancellor Angela Merkel expects that Germany will have to contribute to the E.U. budget more than anticipated because of the crisis. According to her, fighting climate change is still important, in spite of Corona.

The Chancellor of the Federal Republic of Germany, Angela Merkel, used her weekly podcast to reiterate her strong commitment to Europe. The Corona pandemic was an “enormous challenge” she said. In a situation of this kind Europe was even more important than before.

Merkel called the economic consequences of the Corona crisis very dramatic and said mutual funds for aiding the economy were of big importance. The Chancellor expressed her expectation according to which Germany’s contribution to the next E.U. budget will most likely be higher than originally planned.

Merkel said, the German Presidency of the Council of the European Union would be characterized by the fight against the Corona pandemic and its ramifications. But she stressed that, in spite of it all, the climate policy would not be ignored. “Climate issues will be on the agenda, just like the health policy”, Merkel stated.

While Europe and the entire world are fighting the Corona pandemic, China was trying to get German officials to spreads its propaganda regarding the origin of the pandemic, the ‘Welt am Sonntag’ daily reports. According to the paper, the Berlin Ministry of the Interior confirmed Chinese diplomats made such contacts.

The Chinese Embassy in Berlin had recently rejected reports of this kind, saying they were untruthful and irresponsible, the ‘Welt am Sonntag’ report says. But Germany’s government had confirmed Beijing’s attempts to make officials in German ministries comment on the People’s Republic of China’s Corona crisis management favorably and in public.

According to the government in Berlin, its officials refrained from complying with those Chinese prompts. The People’s Republic had been told that “transparency plays a central role in the successful fight against the pandemic.” At the same time, China’s efforts to curb the Coronavirus were praised by the German government. Some Bundestag members disagree with that approach.

In Germany, the easing of restrictions remains one of the most-discussed topics. Chancellor Angela Merkel said decisions of this kind would be taken on May 6th. So far, April 30th had been named as the date on which the Chancellor and the First Ministers would take decisions on changing the existing Corona rules.

On Saturday, hundreds of conspiracy theorists many of whom do not believe the Coronavirus is dangerous and who oppose the measures against its spread staged an illegal protest in Berlin. The demonstration included prominent anti-Semites and others haters, but also a few people who just said they wanted a return to normality.

Police made sure hundreds of people who intended to be part of the protest did not reach its location. Dozens of individuals who did not comply with orders to leave were arrested. Because of the threat posed by the Coronavirus, protests with more than 20 participants are forbidden.

Georg Maier, the head of the German Conference of Interior Ministers, told the ‘Redaktionsnetzwerk Deutschland’, a pool of editorial teams, the existing conspiracy theories about the Coronavirus reminded him of the propaganda spread by ‘Citizens of the Reich’, right-wing extremists that are being watched by the Federal Office for the Protection of the Constitution.

Maier said the attacker of Hanau had been radicalized through conspiracy theories. Therefore it was necessary to observe people who were spreading those. On February 19th, a Nazi had murdered nine people of Kurdish and Turkish descent in the city of Hanau in Germany’s Hesse province.

Holidays in the Countryside

This year’s summer vacations are another subject Germany is discussing these days. In Berlin, the German government’s Commissioner for Tourism Thomas Bareiss said he believed summer vacations within Germany would be possible this year, while trips to destinations abroad would not.

German-language media quoted Bareiss saying he would support a cautious easing of the worldwide travel ban. For any journeys, including domestic ones, safety rules needed to apply, including disinfection and Corona tests, he stated, while Agriculture Minister Julia Klöckner said in an interview with the Funke Mediengruppe publishing house, she recommended vacations in the countryside.

In the meantime, the number of persons infected with the Coronavirus in Germany is still on the rise. Early this morning, there were 156,513 registered cases. So far, 5,877 people have died of the respiratory illness caused by the Coronavirus. At least 109,800 individuals in Germany who used to be infected are cured now.