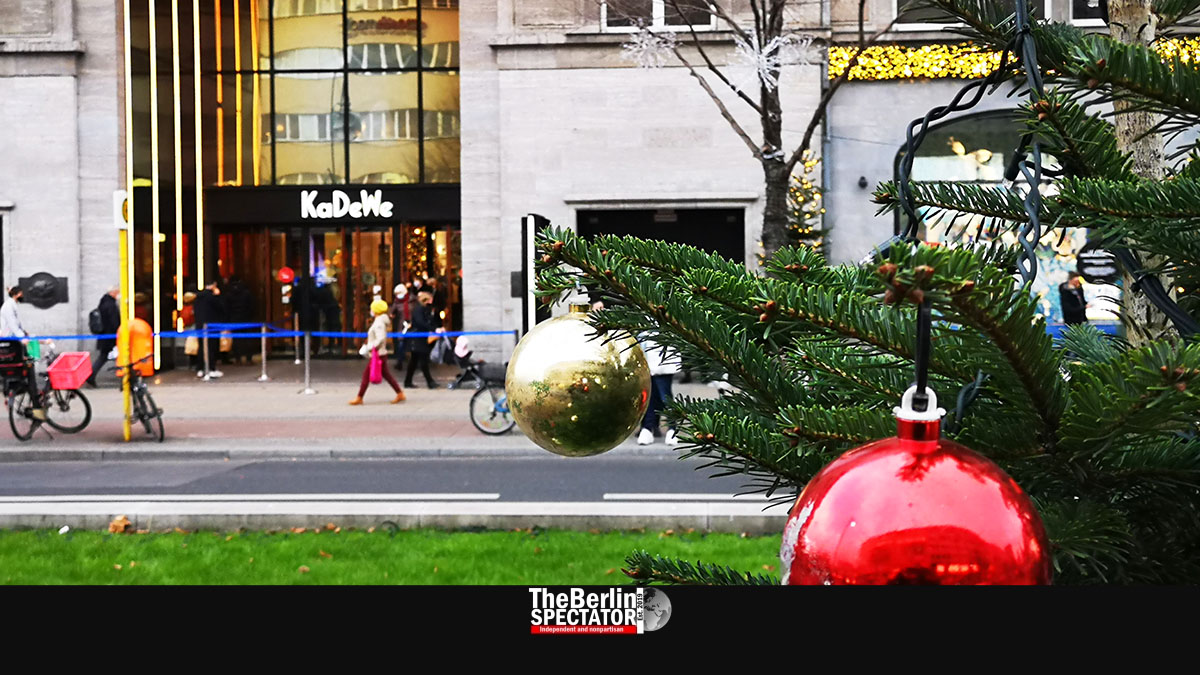 One day before Germany went into its second strict lockdown this year, quite a few Berliners did some offline shopping. Our reporter checked the situation in the German capital’s Charlottenburg borough.

Berlin, December 16th, 2020 (The Berlin Spectator) — In former West Berlin, Kurfürstendamm (a.k.a. ‘Kudamm’) was the city’s main shopping street. In is one of them now, three decades after Germany’s reunification. Hundreds of Berliners used the last regular day of the year to do some Christmas shopping. It was the last time they entered non-essential shops this year.

Who is to blame? A virus called Corona. Christmas is not exactly a good moment for closing most retail businesses or for imposing a major lockdown on Germany, but the government did not really have a choice because of the exploding infection numbers. From today, until at least January 10th 2021, department stores and most other non-food shops will be closed.

At Tauentzienstrasse, many people kept on entering Berlin’s most posh department store ‘KaDeWe’. Later, many of them would leave the building with more shopping bags than they had when they entered. Chancellor Angela Merkel went to ‘KaDeWe’ on Tuesday as well. She is a regular customer.

Around the corner, at ‘Kudamm’, C&A seemed to be the most popular store. Berliners waited in a long line until they were allowed to enter. They seemed to be patient, possibly because they had expected the wait. At other locations in Berlin, for instance at and around Alexanderplatz square, more people tried to get into stores of all kinds.

Other than that, most shops seemed a lot emptier than they usually are this close to Christmas. But Corona Christmas is different. Because of the danger the virus poses, many people might just distribute less presents or purchase them online. In Berlin, book shops and bicycle stores will be open during the lockdown. Good presents can be bought there too.

Located between ‘Kudamm’ and Budapester Strasse, Breitscheidplatz was a sorry sight on Tuesday. In normal years, a huge Christmas market fills even the last inch of the square. This time, there were eight little stalls in which they sold sweets, hot wine punch and sausages. All of those stalls were going to be dismantled yesterday night. Christmas itself was not cancelled, but Christmas markets were.

A lady who sold candied almonds and other sweets complained about the strict lockdown. She said she would have gotten money from the government if she had ten or more employees, but she had only one. Along with her, hundreds of people who would have worked on Christmas markets for weeks just lost their jobs.

At a bi-weekly street market across the street, a meat vendor said she had had more customers than she usually did during the first Corona lockdown in March and April. Now she was hoping for the same effect during the new lockdown. Her colleagues who were trying to sell non-food items like scarfs and candles had to close their stalls until January on Tuesday night. But there are some exceptions. For instance, Christmas tree stands will be in business until Christmas.

At Sachsendamm, a large Swedish furniture store was rather crowded today, on the last normal day this year. But what happened behind the store wasn’t normal at all. Three robbers threatened a security guard yesterday, stole a cash bag he was holding and fled the scene. So far, police have not caught anyone. The culprits might be members of family clans who are specializing in this kind of crime, the authorities believe. It is not the first time.

But even when we ignore yesterday’s Ikea heist, the usual Christmas atmosphere somehow was not there on Tuesday. In a situation like this one, most people seemed frustrated a little. Who could blame them?