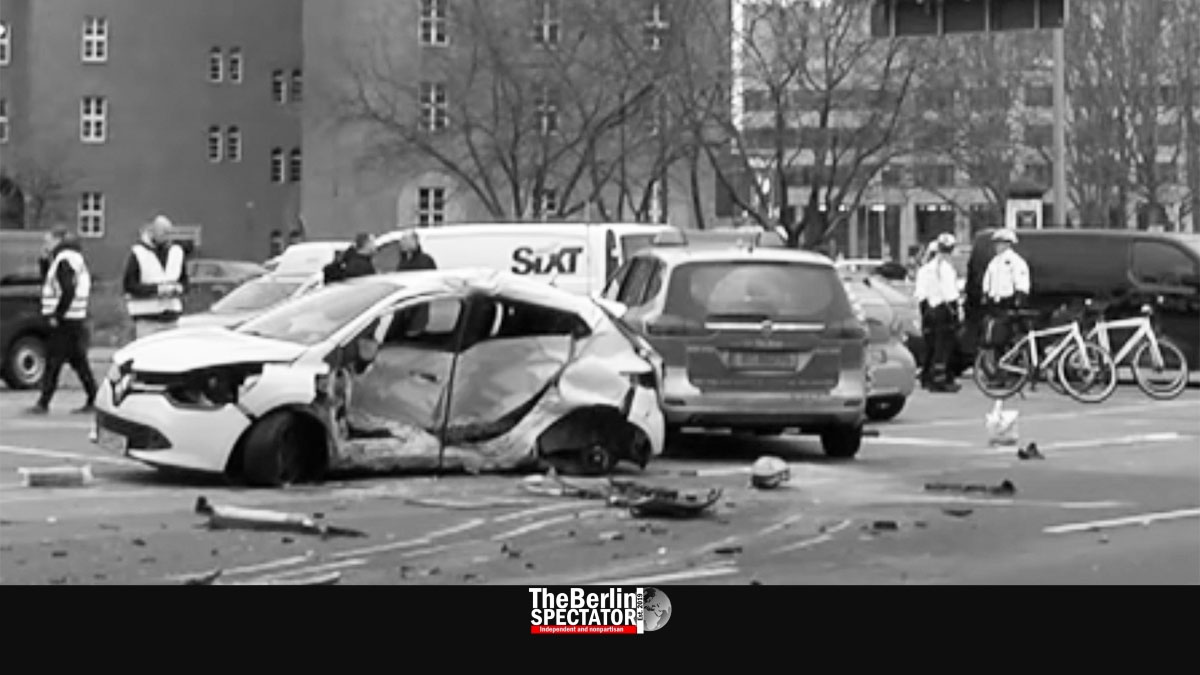 In Berlin, an accident that happened three years ago has caused a lot of anger. A young lady, Fabien Martini, died at the scene. Now the man who caused the accident, a cop, was convicted.

Berlin, January 16th, 2020, updated December 16th, 2020 (The Berlin Spectator) — Almost three years ago, on January 29th, 2018, Fabien Martini wanted to park her white Renault Clio in the heart of Berlin. Near the intersection of Grunerstrasse and Jüdenstraße, the beautiful 21-year-old lady chose to leave the vehicle on the central dividing strip, next to countless other cars. It was the last decision she would ever take.

She had gotten her driver’s license at age 18 and was an experienced driver. What she did not expect was a police car that came out of a tunnel at a speed of 134 km/h (83 mph) and raced towards her. Seconds later, at about 1:00 p.m., the patrol car crashed into the driver’s side of Martini’s small Renault.

Dead at the Scene

During the collision, the police car pushed the driver’s door into Fabien Martini. She was injured badly and died at the scene. A young woman’s life was suddenly over. Her plans and dreams, along with everything else in her life, were gone.

Four and a half hours after the accident, police officers and two members of their crisis response team showed up at Fabien Martini’s parents’ home in Berlin’s Reinickendorf quarter in order to bring them the terrible news. Needless to say, the Martinis were heartbroken, and still are.

Up to this point, the sad story about a car crash in Berlin is one of many. In 2018, 45 people died on the streets of Berlin. Statistically speaking there was one street death every eight days. Fabien Martini was one of them. But this tragedy turned out to be different.

Two years later, there was still no closure. Back then, Fabien’s parents told the ‘Berliner Kurier’ daily, nobody could take away their sadness, but they had not gotten any help since it had happened. There was no justice either. “A civil servant killed our daughter”, her father told the publication, “but the state does not do anything.”

After the accident, Berlin prosecutors started an investigation procedure against the officer who was driving the patrol car. But, according to the Martini family’s lawyer, the investigation revealed little. The authorities seemed to be working slowly and the parents did not hear anything from the authorities. If the story had ended here, it would have been very unfortunate, and probably forgotten soon. But there is more.

The cop at the wheel may have been intoxicated, according to reports by German-language media. Furthermore, it looks like investigators were not interested in reading the perpetrator’s patient chart. At Berlin’s Charité hospital, its director Prof. Dr. med. Ulrich Frei told the ‘Tagesspiegel’ daily in January of 2019, nobody had requested the file for a year.

Frei was quoted saying, staffers at the hospital had been criticized for “possibly refusing” to give away the file. “The opposite is the case”, he stated. “For one year we have waited for someone to come along with a judicial decision.” Of course, documents of this kind will not be given to investigators without a judge’s signature.

After the deadly accident, the officer who drove the police car was taken to the Charité, where he was reportedly tested for alcohol in his blood. The result was not used in the trial. The court threw it out. In spite of that decision: No driver should ever have a high alcohol concentration in his or her blood, much less a policeman. The fact that officers on duty should be completely sober goes without saying.

There are several open questions: If the cop was really intoxicated, why didn’t anyone seem to care? Why wasn’t the officer’s alcohol level checked on site, right after the accident? During the trial, Fabien Martini’s parents maintained the policeman was indeed driving under the influence of alcohol.

A year before the trial began, the officer who caused the accident was forced to appear in front of a Berlin court for owning illegal weapons, after his colleagues found those in his apartment. He had two brass knuckles, which are forbidden in Germany. The officer used them to take obscure photos of himself, which he posted on social media.

This kind of activity of his, taking those weird photos to impress people on Facebook, or to shock them, might not have legal ramifications. But it raises even more questions about this individual. Should someone who wants to impress people by posting selfies with forbidden weapons have been a cop at all? But this is not related to the Fabien Martini case. Should it be?

Almost two years after the deadly accident, there finally was an arraignment, in January of 2020. The Berlin Prosecution said it had taken that step “after an intensive investigation”. Peter G., the cop stood trial at the Court of Lay Assessors which is part of the District Court in Berlin’s Tiergarten district. On Tuesday, the verdict was read. He was given fourteen months probation.