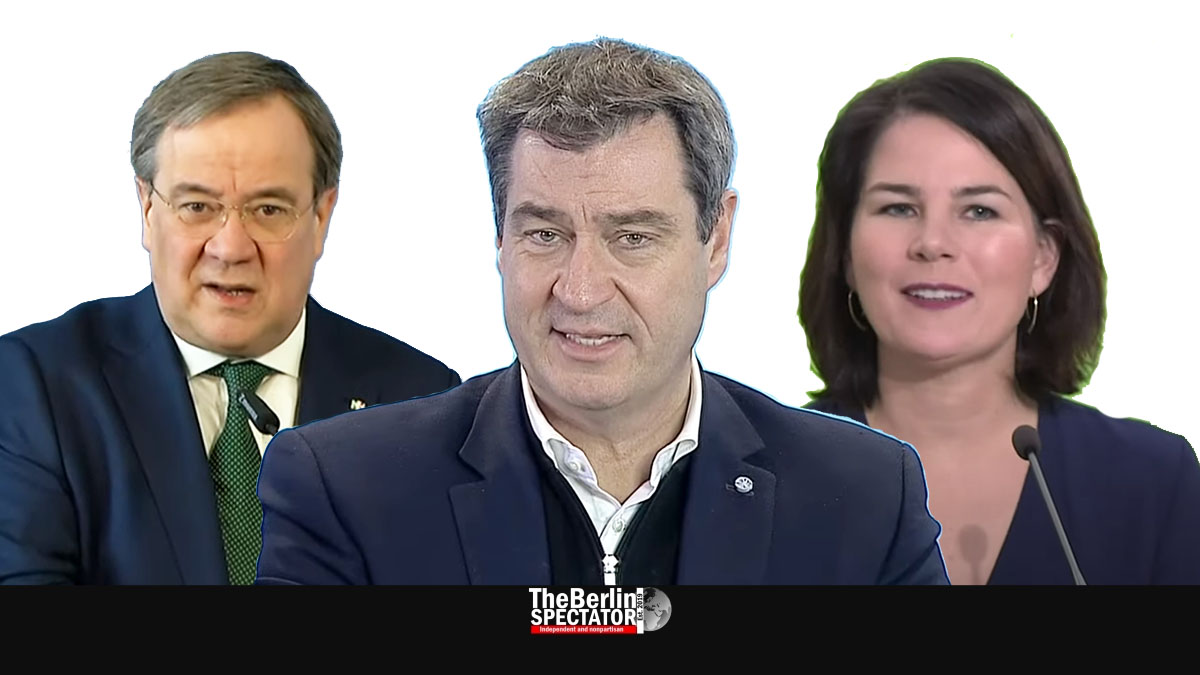 Germany needs a new Chancellor. Angela Merkel is generally very popular, but she is preparing to go in September. So, who will it be?

Berlin, February 2nd, 2021 (The Berlin Spectator) — Germans do not vote their Chancellor into office directly. If they did, if there were elections right now and if Angela Merkel was still available, a big majority would likely choose her yet again, after almost 16 years. Reliability is important. So are common sense and reason. The latter is what the country got from Mrs. Merkel in normal times, during the financial crisis and in the ongoing Corona crisis.

Looking at the latest poll results, less than eight months before the next Bundestag elections, leads to the following result: Unless things change a lot, a center left coalition does not seem likely. Together, the Greens, the center-left Social Democrats (SPD) and the far-left ‘Die Linke’ would probably not have a majority at all, or a shaky one.

In this case, the Greens would probably take the lead. With almost 20 percent in the polls, they are a lot stronger than the former big tent party SPD with its 15 percent. Those 7 percent ‘Die Linke’ could contribute would not really suffice. And this is only the math. The main question is: Would they even want to govern together, if they could?

The SPD and the Greens have governed together before. There are lots of overlaps what their policies are concerned, but things are different with ‘Die Linke’. The leftists do have moderate members the other parties could probably work with, but there are radicals too, who like the idea of dispossessions, who defend Putin and who want to leave NATO. There is too much incompatibility, it seems.

This leaves Angela Merkel’s conservative Christian-Democratic Union (CDU) as the most likely senior coalition partner. With some 37 percent in the polls, CDU and CSU are the largest parties, by far. The ‘Union’ is stronger than the Greens and the SPD combined. One of the latter two parties will have to be the conservatives’ coalition partner, because their natural one, the FDP, is too weak.

When we consider the fact that the SPD has suffered a lot of abrasion and shrinking during the grand coalitions is ran with Angela Merkel, and statements by its leaders, the likelihood for yet another partnership of this kind is relatively low. This means, the CDU will have to marry the Greens. But what sounds easy in the previous sentence really is not. Especially in the fields of social policies, climate protection and the economy, there are differences which would have to be smoothened out with a lot of sandpaper.

In all likelihood, the next Chancellor of the Federal Republic of Germany will be a member of the CDU or its Bavarian sister party CSU. On the other hand, things can always change, especially in times of crises.

One of the following individuals will likely be elected Chancellor by the Bundestag after the elections in fall:

Markus Söder (54) is the man with the Kennedy effect. In pre-Corona times, he made people smile by cracking cheap jokes during speeches. It is not what he says, but how he says it. And it is about the whole package. Söder does have a personality. He is definitely likable, but his critics believe he likes himself most. During the ongoing Corona crisis, he has become one of the most important leaders in Germany, even though his turf is supposed to be Bavaria only. As First Minister, he rules the federal state. Even Söder’s foes are convinced he would likely win the elections for both CDU and CSU, if he ran for Chancellor. He is more conservative than Angela Merkel and would probably pull the ‘Union’ parties back towards the right.

Politically, Armin Laschet stands for continuation, at least more than Markus Söder. The new chairman of the CDU will turn 60 in two weeks from now. As First Minister of Germany’s largest Federal State, North Rhine-Westphalia, he does have experience when it comes to governing, just like Söder. Like his Bavarian foe, he is likable to many, but not quite as gifted as a rhetorician. During the ongoing crisis, Laschet’s performances in front of TV cameras were sometimes a little too theatric. As candidate for Chancellor, Laschet might pull more progressive voters that Söder, but he is generally not quite as popular as the man from Bavaria.

Annalena Baerbock (40) looked like a possible Chancellor in mid-2019, when the Greens were almost as strong as the CDU, when Corona was still a Mexican beer brand and climate protection was the term everyone was talking about. Now, the weakness of the left spectrum makes this promotion more unlikely. Mrs. Baerbock is a political scientist and lawyer who was not even born when her party was founded forty-one years ago. For years, she worked for the Greens at the Bundestag and for the European version of her party. At some point, she was chairlady for the Greens in Brandenburg. The rest is history. Annalena Baerbock may not be the most gifted orator in the world yet, but she is young and would likely grow into any position.

Robert Habeck (51) studied philosophy and German philology. On his own and with his wife, he released several children’s books and novels. One of those was converted into a theater play, another into a movie. Once the new millennium had dawned, Habeck increased his political activities with the Greens in his home state of Schleswig-Holstein, where he became Minister for Energy Transition and Agriculture in 2012. In cooperation with Annalena Baerbock, he heads the Greens. This means he would automatically be a potential Chancellor in the unlikely case of a three-way center-left government coalition. Robert Habeck’s weakness: He is not the most convincing orator either. Like his colleague, he is part of the wing of ‘realists’ in his party.

Olaf Scholz (62) is the SPD’s official candidate for Chancellor. He does have a number of problems in this position. It is not his experience. As Vice Chancellor and Finance Minister of the Federal Republic of Germany, he has gained respect, even among conservatives. Before, he was Labor Minister, First Mayor of Hamburg and Interior Senator of the same city. The issue he faces is his own party. In the past two decades, it has slumped from above 30 percent down to 15. Unless a miracle happens, Scholz cannot really win the elections. Secondly he will not only have to fight opponents of other parties, but in his own one as well. The SPD’s two chairpersons are sort of unpopular left-wingers who have not managed to resolve their party’s problems. Scholz, on the other hand, is a popular centrist who may not be able to improve things in a situation like this one.