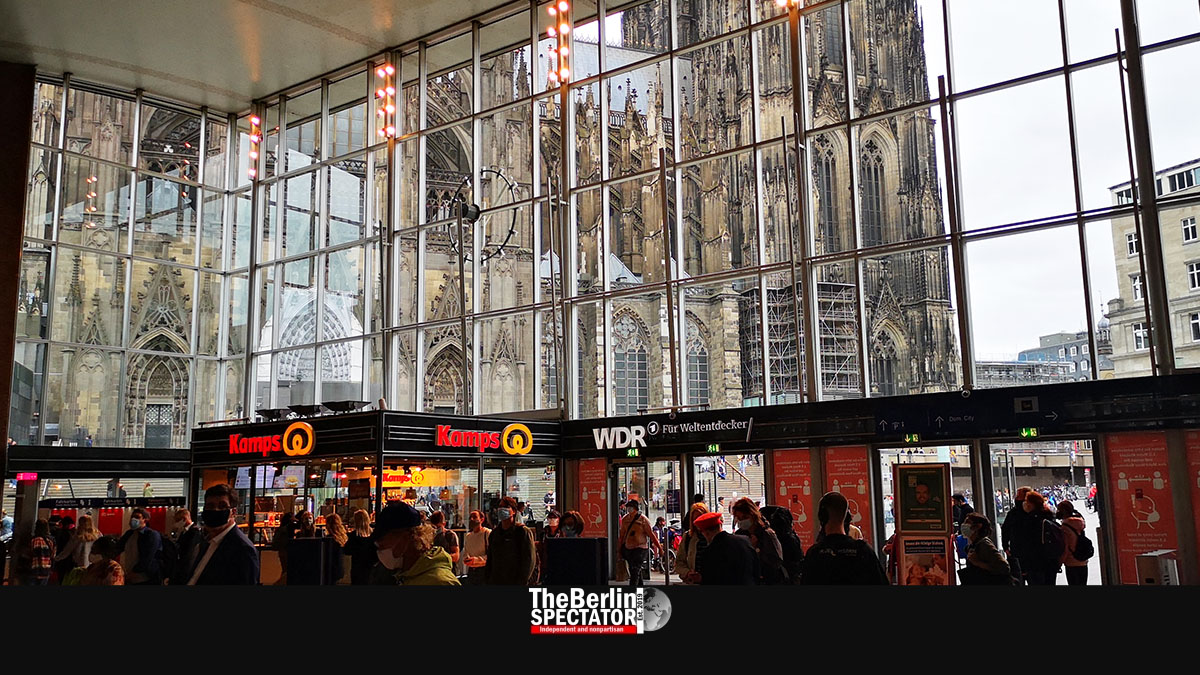 Cologne is one of those cities one does not forget. So many things about it are special, including ‘a huge thing’ in its very center. It seems far bigger than anything ever erected by man. Don’t even think about getting up there.

Berlin/Cologne, September 6th, 2020. Update: February 21st, 2021 (The Berlin Spectator) — One of the preconditions for getting to know Cologne a little is finding it. Before navigation systems were invented, motorists from other parts of Germany or the world ran into issues because the Ruhr region has a million Autobahn interchanges. Nobody ever knew where to go, no matter how many tattered maps they were trying to read.

North Rhine-Westphalia, the German federal state that includes Cologne, has so many cities it is easy to lose track. But Cologne is pretty much the center of it all, in a way. Approaching it is interesting. In the Ruhr region, a lot of industrial areas, construction sites and settlements mix with rural spots. Just outside Cologne, cows graze on a pasture located between a suburb and an industrial park.

A train that has a huge delay every time, due to railway switch problems, takes a bunch of commuters and tourists to Cologne’s central station. It is hard to tell them apart, until they disembark from the train, walk down the stairs and exit the station on their way to the city center.

The commuters just walk out, without even noticing “it” anymore. Yes, let’s refer to “it” as “it”. Many of these locals have seen “it” all their lives, every day. “It” just does not impress them anymore. Tourists, on the other hand, especially first-timers, look like they need a Valium right there, as they exit central station. Most have never seen anything this gigantic before.

It’s like “boom”. “This is me. And you are an ant staring at me from down there.” That is what “it” seems to be saying. Seriously, this is not an exaggeration: Cologne Cathedral is the building of buildings, the temple of temples. Giant is still an understatement. This Cathedral can probably be seen from Mars.

Yes, Cologne has its own beer, its own language, its own music, but it also has “it”. What the local beer is concerned: ‘Kölsch’ is a yellow fluid that is hard to describe when you do not drink beer. It smells a bit more intense than the usual ‘Pils’ Germans drink.

‘Kölsch’, or ‘Colognian’, is also the distinct dialect they speak down there. And these people do not only speak, but also sing it. Everyone in Germany used to know BAP. They were a very popular Rock and Folk band from Cologne that was specialized in songs sung in ‘Kölsch’.

Apart from the Cathedral, the Rhine river is one of Cologne’s main sightseeing spots. It is nice to sit there, on the promenade right at the water, to have an Apfelschorle and stare at the ships passing by. There mainly are sightseeing ships and barges that go up and down the river all the time. In Cologne, it has always been that way. Coal, grain, wood, containers, whatever it is, it will be transported on the water.

Walking across Hohenzollern Bridge is mandatory in Cologne. First of all, the view of the Cathedral and the rest of the city is priceless, especially in the evening. Thousands of padlocks marked with two names each are locked to the fence that separates the pedestrians from the trains. Each padlock stands for one couple. Oh yes, there are many lovers in Cologne.

At Cologne Philharmony, instrumentalists are rehearsing again this windy evening in late August of 2020. It is the second time since the Corona crisis started messing it all up. Some security guards are making sure nobody comes close to the building. The musicians are supposed to play their music without being disturbed by regular people who do not even know how to spell Shostakovich.

Cologne is also a typical German city, in a way. It is the country’s fourth-largest one behind Berlin, Hamburg and Munich, with almost 1.1 million inhabitants. Like all cities in Germany, it has a pedestrian zone, a rather crowded one. There are a gazillion restaurants, and they are all crammed as well. In Corona times (summer of 2020), getting into ‘L’Osteria’ only works with online reservations. But those who are standing in line outside are not being told what they have to do. The Vietnamese restaurant next door is a lot nicer anyway.

Cologne was known as Colonia Claudia Ara Agrippinensium some 2,000 years ago. In the year 50 A.D., it was officially declared a town. There was no giant Cathedral, no Hohenzollernbridge, there were no selfies, no pedestrian zones and no Coronavirus, but the Rhine river and those boats were always there. Without the river, there would not have been any city at this spot.

The next day rewards Cologne for its beauty, with a lot of Sunshine and warmth. Suddenly, everyone is on Cathedral Square. Again, the tourists on site cannot keep their eyes off the Cathedral next to them, while those Cologners just walk by, as if there was nothing to see.

Now the moment has arrived. It is time to climb the tower. Due to the Corona pandemic, the next group has to wait until the previous one leaves the observation deck. Masks and distance are mandatory. And it is hot. While the author of these lines is trying to get his 110 kilos (242 pounds) up those stairs, a man who seems to be 115 years old overtakes him. How discouraging.

There should be a sign on the tower: “Do not faint, curse or complain. You decided to walk up there. So, just shut up and enjoy the sight while you suffocate behind your Corona mask.” Actually, there is a sign saying “The ascent is onerous.” Oh, really? Tell me about it. Where are the two guys with a stretcher who will carry me up there?

Needless to say, the sight up there is just stunning. It is the combination of the city, the Rhine river and the neighboring Cathedral tower that makes visitors forget about the ascent rather quickly. After ten minutes, a lady sends visitors back downstairs. The next tourists are already waiting to torture themselves on the never-ending stairs.

Along with most of the city, Cologne Cathedral was damaged badly during World War II. Repairing the bulk of it took until 1956. But construction workers were busy getting rid of war damage until 2005. Scaffolding is always being fixed to the giant temple somewhere. It has to be cleaned and repaired all the time.

Birds? What birds? Exotic birds, rose-ringed parakeets, thousands of them, are among the many special sights and aspects Cologne provides. They have spread to Düsseldorf and other cities in the region as well. Hundreds of them race from tree to tree all the time, with their jazzed chatter. Their droppings are a nuisance.

Here comes the big question: How in the hell did those parrots even get to Cologne? Experts say some rose-ringed parakeets were set free, or they escaped from some cage. Obviously, these birds usually live in the tropics. Since 1967, they have been multiplying in the Ruhr region. Düsseldorf’s ‘Königstrasse’ is just as full of them as Cologne’s Rhine promenade.

That is also where Cologne’s water level tower stands. Its big meter shows how high the water gets. The city has had bad floodings in 1784, 1926, 1993 and 1995. On those occasions, the Rhein came into the old town. A relatively new anti-flooding system protects Cologne from water levels of up to 11.90 meters (39 feet) above normal.

The next stop is Düsseldorf, one of Germany’s richest cities. The number of jewelers and Aston Martins on the streets is rather high. Those shopping streets are wider and even more crowded. Cologners and Düsseldorfers supposedly do not like each other. Tourists from Berlin couldn’t care less.