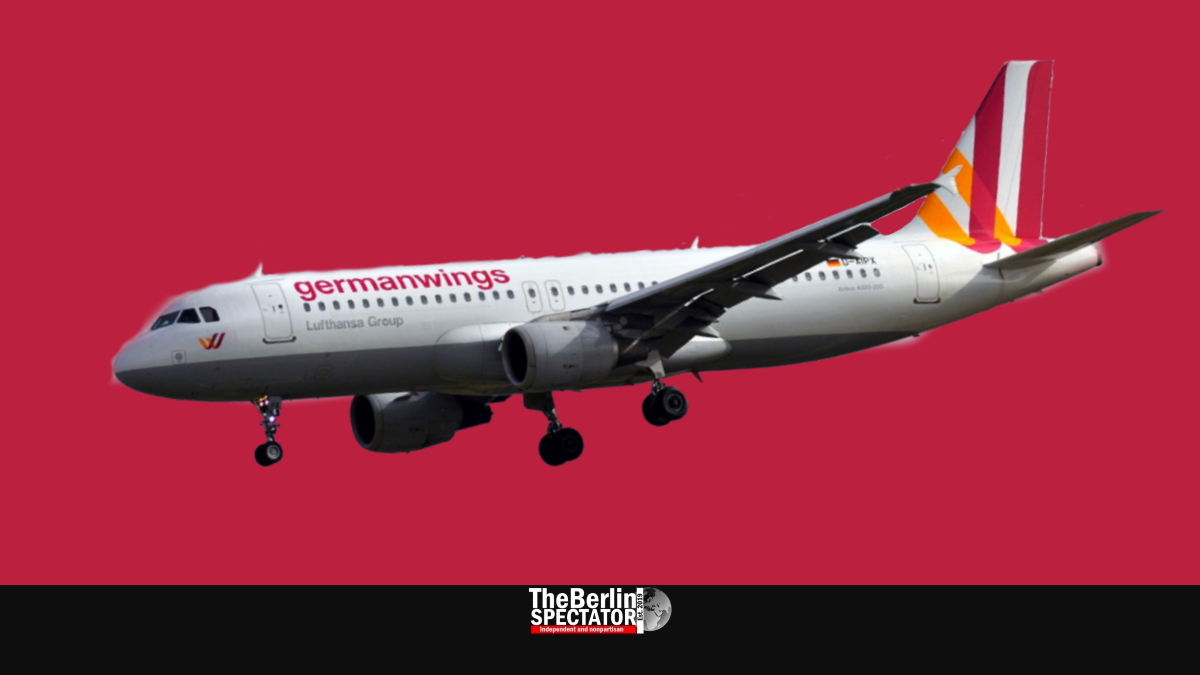 The crash of Germanwings flight no. 9525 should never have happened. It did because, at the time, pilots were not checked the way they should have been.

Berlin, March 24th, 2020. Update: March 21st, 2021 (The Berlin Spectator) — What happened six years ago, on March 24th, 2015, was the unthinkable because, in the Western Europe of the 21st century, modern planes do not just fall out of the sky. They are technically so reliable that they will fly with one engine if they have to. Even a plane that does not have any thrust, because both engines gave up for some reason, can still glide to the next airport.

This millennium, Russian militants and the Iranian army have shot down passenger aircraft by accident, killing hundreds of people. But the plane in question was not flying in risky air spaces, such as Yemen or Syria, but above the French Alps. Besides, the aircraft was not a Boeing 737MAX, but an Airbus. Nothing was going to bring down this plane, except for the aspect that actually did.

“I rely on God.” Those were the last words of a first officer who is suspected of having switched off the autopilot and putting his plane into a steep dive just after the captain had gone to the lavatory for a moment. Even though the captain miraculously made it back into the cockpit during the dive and tried everything to save the Boeing 767, it broke apart in mid-air and fell into the Atlantic Ocean near Nantucket Island on October 31st, 1999. All 217 people on this aircraft died.

Back then, the Egyptian investigators did not (want to) believe in a pilot suicide and prevented a handover of the case to the F.B.I.. But the American NTSB did, and still believes in it, 21 years later. The cases of EgyptAir flight no. 990 and Germanwings flight 9525 have a lot in common.

Nine years before the EgyptAir plane feel into the ocean and 24 years before the Germanwings aircraft burst into millions of parts the millisecond it crashed into a mountain in France, a shiny new Airbus A320 with the tail number D-AIPX, the plane seen on the picture above, was delivered to Lufthansa. At the time, the A320 already was the main competitor for Boeing’s workhorse for short and mid range flights, the 737.

On January 31st, 2014, fourteen months before the crash, the livery was changed. Lufthansa’s Eurasian crane was replaced by the Germanwings logo. When this aircraft took off from Barcelona in the morning of March 24th, 2015, it was 24 years old.

The Airbus’ age was not a problem. It was in regular maintenance at Lufthansa Technik, and they do not mess around. D-AIPX had even gone through a C-Check less than two years before, the kind of maintenance activity during which existential parts are being removed, checked, double-checked and either reinstalled or replaced.

On the day before it happened, the nose wheel door gave the technicians headaches. But they managed to fix the issue. The aircraft was fine. It was good to go, airworthy and safe, in spite of its age, when it raced down the runway at Barcelona’s El Prat Airport and took off towards Düsseldorf International Airport at 10:01 a.m.. At this moment, the 150 passengers and crew had 40 minutes to live.

It was 10:30 a.m. local time when a flight control agent gave flight 9525 permission to head towards the IRMAR waypoint. This was the last radio contact. Eleven minutes later, the pilots were dead, and everyone else with them. The last minutes of 149 people’s lives were scary and stressful. One person, the first officer, seemed to be looking forward to everyone’s death. Judging from the cockpit voice recordings the investigators listened to, he was calm.

When the captain came back from the lavatory, he had already noticed something was very wrong. The aircraft was losing altitude rapidly and racing towards the next mountain peak. During the last seconds, the cockpit voice recorder reveals how the captain desperately tried to break through the cockpit door. “Open the damned door!” he shouted, knowing they would all die if he did not manage to get in.

Safety requirements imposed on the airline industry after September 11th, 2001, kept him from entering. Since then, cockpit doors had been fortified. There was no way he could have entered as long as the first officer inside did not want him to. This was the difference between this flight and EgyptAir flight 990 which crashed in pre-September 11th 2001 times.

But, in both cases, the captain went to the bathroom, in both of them the first officer wanted to kill himself. In both cases, the suicidal individual intended to murder many people while committing suicide. It worked, in both cases, decades apart. Instead of just passing away on their own, they wanted to shock the world, scare their passengers and crews, kill everyone aboard and inflict unimaginable pain on the next of kin and to the friends of the deceased.

At 10:40 a.m., the Ground Proximity Warning kicked in. ‘Terrain! Terrain! Pull up! Pull up!”. This automatic voice message was heard on the cockpit voice recorder. At the same moment, the French Air Force sent a Mirage fighter jet to the area, in order to find out why in the hell the Airbus had lost so much altitude.

Student Group On Board

Five seconds after 10:41 a.m., the Germanwings plane crashed into the Trois-Évêchés mountain range in the French Alps. The aircraft exploded into millions of tiny parts. There was hardly anything left of the people on board either. The victims came from 21 nations. Most of them, 74 passengers and crew members, were Germans. Fifty-four Spanish nationals were on the plane as well.

The tragedy was already unbearable when the following piece of news was reported: A group consisting of 16 students from the Joseph König Secondary School was on board with two of their teachers. The teenagers and two adults had wanted to return home to Haltern am See, a small town between Dortmund and Münster, after a student exchange program during which they brushed up their Spanish. The shock and sadness their families went through, and still feel five years later, are indescribable. Weeks after the crash, eighteen white coroner’s wagons drove through Haltern.

Right after the deadly Germanwings incident, French President François Hollande addressed the nations involved in the tragedy, ministers visited the crash site. In Germany, the Foreign Ministry under today’s President Frank-Walter Steinmeier set up a hotline for the families of the victims from abroad. Steinmeier himself flew to the site with his colleague, Transport Minister Alexander Dobrindt. The next day, Hollande, Chancellor Angela Merkel and Hannelore Kraft, the First Minister of North Rhine-Westphalia at the time, were there. Some three weeks later, an ecumenical mourning ceremony was held at Cologne Cathedral.

In both Germany and France, planned strikes in the airline industry were cancelled. Germanwings got rid of the flight number 9525 for good. Soon the Lufthansa subsidiary would change its name to Eurowings. The old name reminded people of the intentionally caused deadly crash.

The cause of this avoidable crash became clear early on in the investigation. Andreas L., the first officer, was not only suffering from severe depression. He was officially on sick leave on the day he steered that plane into the mountain, but did not volunteer that information. He had not taken his medication either. And he had made statements that should have sounded alarm bells rather than just raising eyebrows. Today, the way pilots are being checked in the European Union is stricter than it was six years ago, and there is a ‘two crew members rule’. Nobody will be in the cockpit alone.

There are memorial sites for the victims of Germanwings flight no. 9525. One was established at the crash site, one at Le Vernet, a village close by. There is a memorial room at Düsseldorf Airport, where the flight should have arrived, but never did. And there are several memorials in Haltern am See, where those lost in the French Alps will never be forgotten.