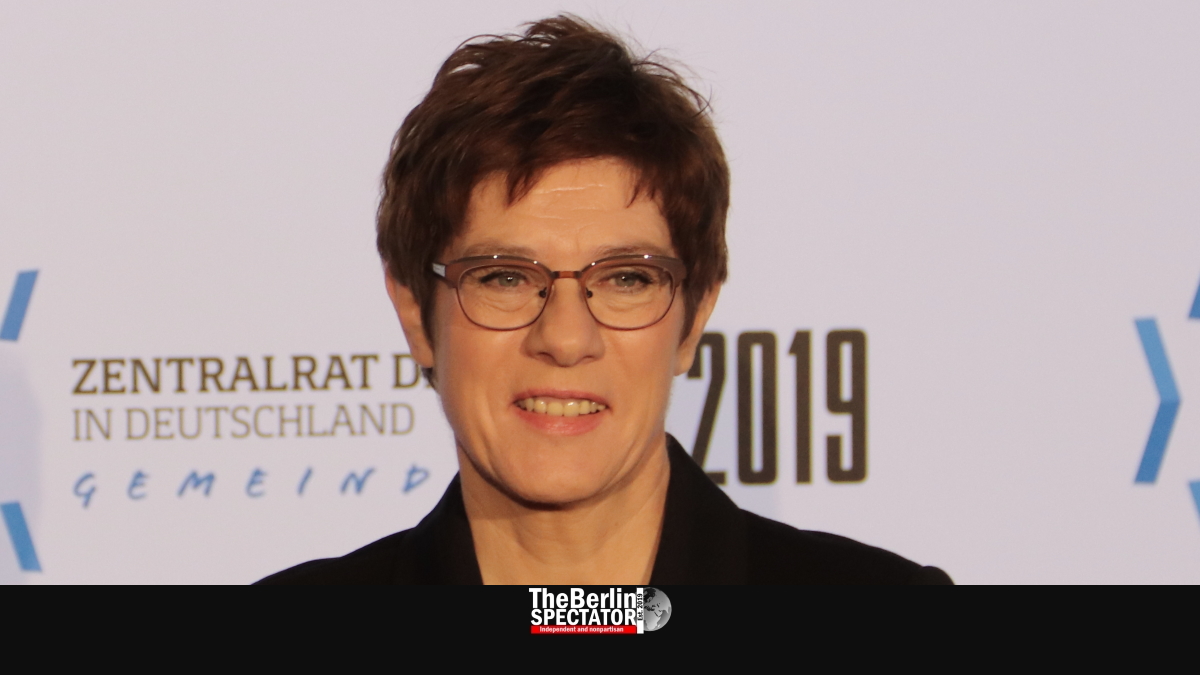 Germany’s Defense Minister Annegret Kramp-Karrenbauer has disputed claims according to which she did not stick to the truth in regard to the ammunition scandal that is rocking her Ministry. Today, she will concentrate on Secretary Lloyd Austin’s first official visit to Germany.

Berlin, April 15th, 2021 (The Berlin Spectator) — Because of her extremely long name, which visitors from abroad cannot even pronounce properly, Germany’s Defense Minister Annegret Kramp-Karrenbauer is also known as AKK. The former chairlady of Angela Merkel’s conservative CDU is tangled up in an ammunition scandal. Members of the opposition at the Berlin Bundestag are accusing her of not telling the truth. She rejected the allegations on Monday, after the Berlin Bundestag’s Defense Committee discussed the issue.

It started a year ago, when Markus Kreitmayr, who commands the elite troop KSK within the Bundeswehr, Germany’s armed forces, started a “collection” among his soldiers. They were supposed to return weapons and ammunition they had not returned after gunnery exercises, or items they had stolen. In return, he promised them immunity from prosecution.

Back then, one of the problems was the fact that ammunition had been missing. After the “collection”, the Bundeswehr ended up with more ammunition and weapons than it had looked for. More than 40,000 rounds of ammunition and two grenades were returned. In an elite commando which has had its share of scandals because of extremist right-wing tendencies among some of its members, this sort of thing is even more alarming than it would have been under normal circumstances.

All Options on the Table

There are now two investigations against Brigadier General Kreitmayr, one within the Bundeswehr and one conducted by the prosecution. For now, he is still on duty. But all options were on the table, Minister AKK said on Monday. The same applies in her own case, at least from the point of view of the opposition involved in the Defense Committee’s efforts to get to the bottom of the scandal.

Kramp-Karrenabuer insists she had not known about the scandal until she had read about it in the press in February of this year. The Deutschlandradio reported, her schedule for last year could suggest otherwise. She had held talks with KSK commanders last year. AKK herself stated the Defense Committee had not produced evidence that would have suggested that she had not told the truth. This statement of hers was interpreted in more than one way.

Some German-language media quoted the defense expert Marie-Agnes Strack-Zimmermann, a member of the liberal opposition party FDP who carries an even longer name than Annegret Kramp-Karrenbauer. She said it was incomprehensible to her how nobody would have informed the leadership of the Bundeswehr or the Defense Ministry after a scandal of this kind. If this had really been the case, the Minister did not have things under control. On May 3rd, the Defense Committee is scheduled to convene and deal with the scandal again.

An important visit is giving AKK a break from the scandal today. None other than President Joe Biden’s Defense Minister Lloyd Austin is in Berlin. It is his first official visit. After the chaos Biden’s predecessor caused on several levels, Austin and AKK intend to get back on track in regard to the military cooperation. A major pullout of troops from Germany, which former President Trump had announced, has already been retracted by the White House.

There are other issues that were not resolved by the transition of power in the United States of America. Those include Germany’s defense spending, which still disappoints the Pentagon in Arlington (Virginia) and the White House in Washington D.C.. The Americans are not happy about the natural gas pipeline North Stream II either, because it involves Russia. This subject is controversial within Germany as well. Secretary Austin and AKK were also going to discuss the military operation in Afghanistan.