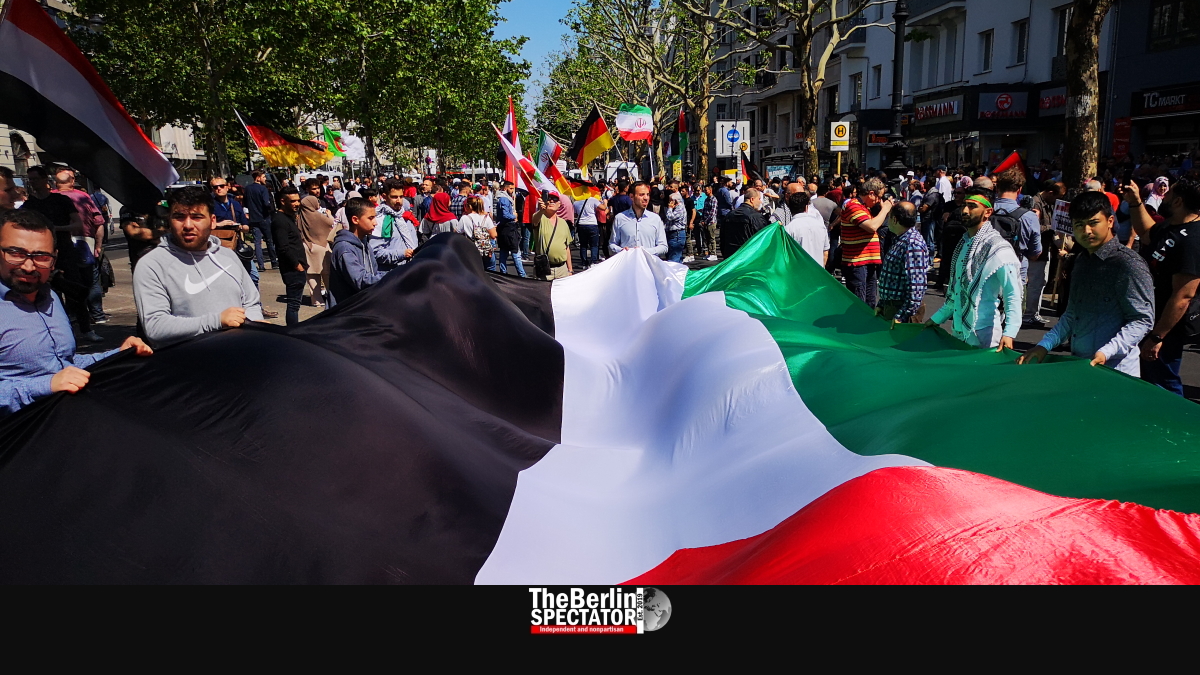 In Berlin, the ‘Al Quds March’ will take place on May 8th yet again, unless the authorities ban it beforehand. The latter is exactly what Jewish organizations want.

Berlin, April 16th, 2021 (The Berlin Spectator) — For years, thousands of antisemites have joined the annual ‘Al Quds March’ in Berlin. In 2020, the first Corona year, the rally was cancelled. This year, it is supposed to take place again, on May 8th at 2:30 p.m. in Berlins Charlottenburg borough. According to the Berlin Police Department, the organizers expect 2,000 participants. The Iranian regime initiated the Al-Quds Day in 1979. It always was about “conquering Jerusalem”.

Hezbollah is Behind Event

During ‘Al Quds March’ events that have taken place in Berlin since 1996, the protesters have chanted antisemitic propaganda and vowed Israel would be annihilated. As far as the German authorities are concerned, the Shiite terror organization Hezbollah is behind the ‘Al Quds March’. Germany finally banned Hezbollah on April 30th, 2020, after the United States and Israel had called for a ban for many years. Exactly three months before the ban, to the day, Israel’s President Reuven Rivlin had demanded this kind of step in a speech at the Berlin Bundestag.

Now, Jewish organizations are demanding a ban of the ‘Al Quds March’ as well. For the Central Council of Jews in Germany, its President Josef Schuster said it was “dominated by antisemitism and hatred towards Israel”. He stated the participants were exploiting Germany’s freedom of speech to spread their hatred. These inhuman activities needed to be ended once and for all. Schuster said rhe connection to the banned terror organization Hezbollah was obvious.

An alliance of numerous other Jewish and non-Jewish organizations, including the Amadeu Antonio Foundation, the American Jewish Committee Berlin, the Jewish Forum, the Mideast Freedom Forum Berlin and the ‘WerteInitiative’, see it the same way. “Each year, on the last Friday in Ramadan, supporters of the Islamist dictatorship in Iran call for ‘Quds Day'”, the alliance said. “Under the pretext that they represent the interests of the Palestinians, they spread antisemitic conspiracy theories and demonstrate combat readiness against Israel and the West. The anti-Zionist hatred towards Israel is supposed to mobilize antisemites of all shades.”

“We stand for solidarity with Israel and reject any kind of antisemitic or Islamist propaganda in Berlin”, the organizations who are part of the alliance against the ‘Al Quds March’ said in a statement. They asked Berlin’s Interior Senator Andreas Geisel to forbid the March, also because the terror organization behind it, Hezbollah, had been banned already.

Senator Geisel told The Berlin Spectator, he would review the registration for the ‘Al Quds March’ rally. He said section 8 of Germany’s Basic Law, the ‘Grundgesetz’, guaranteed the freedom to demonstrate. On the other hand, Berlin did not want events of hatred and agitation. “We will see what options we have. No decision has been taken yet”, Senator Geisel said. In 2019, he had joined a counter protest on the day of the ‘Al Quds March’.