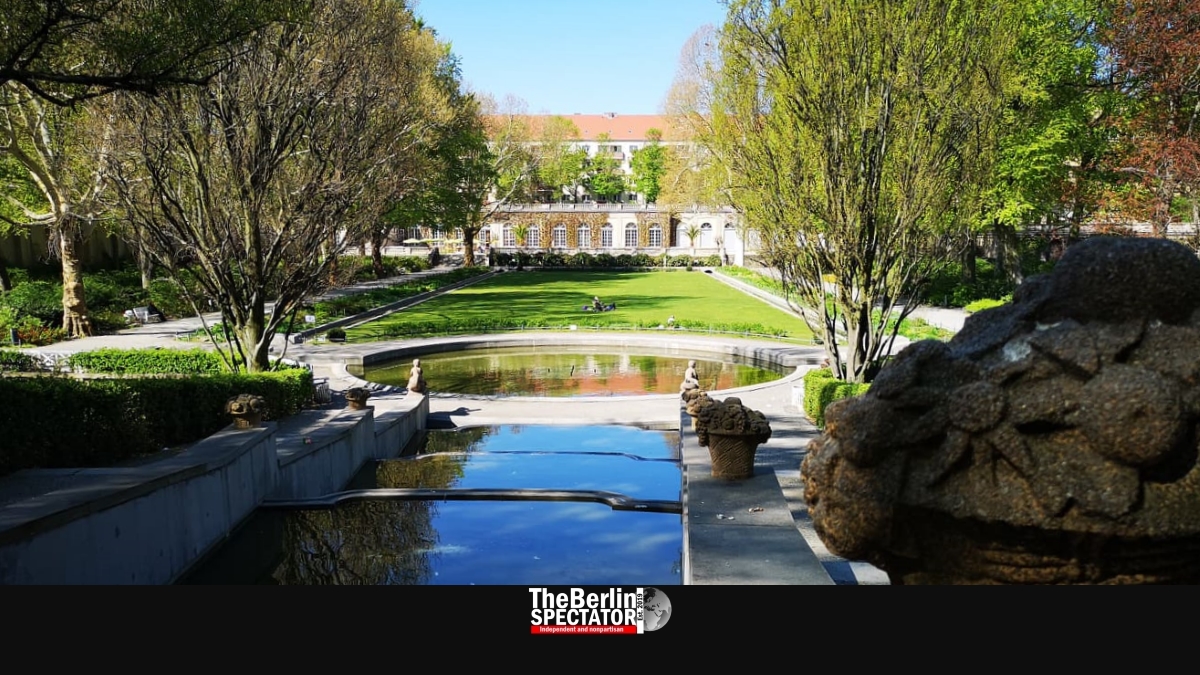 Berlin has many parks. Some of them stick out because of their size, their location or the animals they accommodate. ‘Körnerpark’ in Berlin’s Neukölln district is different.

Berlin, October 2nd, 2019. Update: April 24th, 2021 (The Berlin Spectator) — Living in Berlin or visiting the rather active and loud city requires a break now and then. Both residents and tourists will feel a lot better when they have a little quietude here and there. Berlin has 188 parks and public gardens many of which offer that kind of surrounding and atmosphere.

Sure, there are the enormous Tiergarten park, the nice Treptower Park at the Spree riverbank, Volkspark Friedrichshain and other famous ones. But there is only one spot like Körnerpark. It is a little refuge in the partially hectic Neukölln borough.

This applies even more because of its position. Since the park is located five to seven meters (16 to 23 feet) below the street level, hardly any street noise will be audible down there. So, why on Earth would anyone dig a huge hole for a park? Because it used to be a gravel pit, meaning the hole was already there when it was converted into a park.

The former owner, Franz Körner, gave the gravel pit to the town of Rixdorf, which used to be located here, as a present in 1910. He told them he wanted a park which carried his name. That is how it happened. In 1916, the conversion was completed. Now, there was a park designed in a neo-baroque style.

Because the park is on a lower level than the streets and apartment buildings around it, it has retaining walls on three sides. Stepping on the very well-kept lawns is forbidden, but Berliners mostly ignore the big signs. Some individuals even leave all of their trash right there on the grass.

Before Corona, party people used to consume countless bottles of beer and hard liquor at Körnerpark. Well, they needed something to flush those potato chips down their throats. This means waste sometimes piles up around the park’s trash cans, especially in spring and summer. But, in spite of this aspect, Körnerpark is the place to be.

Until 2008, the spot was right in the approach path for aircraft landing at Tempelhof Airport. But since the latter was closed to air traffic, Körnerpark became the refuge of quietude it originally was, unless the gardening crews with those leaf blowers are on site.

The park’s former orangery now accommodates the ‘Galerie im Körnerpark‘ which offers exhibitions. Recently, they presented a collection of interesting art prints. Then, they showed art objects that made the gallery look like a construction site, to some. Modern art can be hard to identify.

Next door, at the ‘Zitronen-Café‘, they had delicious looking brunches for 10 Euro (11 Dollars or 8.50 Pounds) before the Corona crisis hit, but also coffee and cake. Sitting on that terrace overlooking the former gravel pit is simply priceless.