Berlin: The Issue with the Most Beautiful Cherry Blossoms in the City 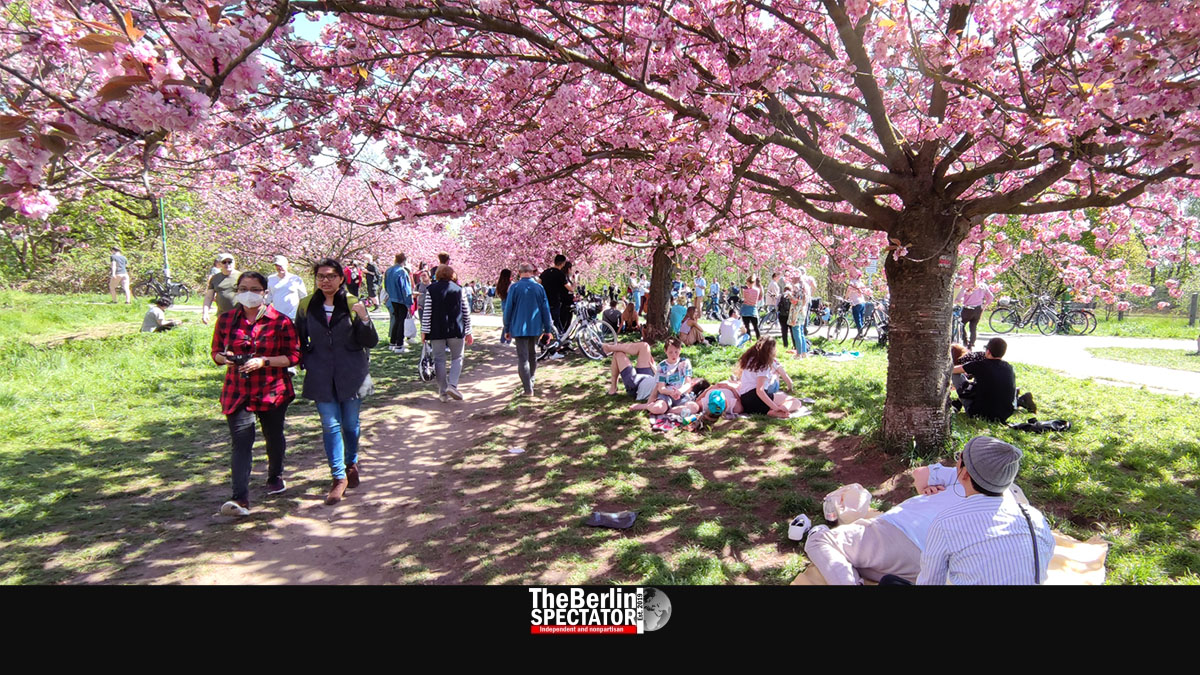 Finding the nicest cherry blossoms in Berlin took a while. When I finally located them, after a few failed attempts and a long bicycle ride, an issue popped up.

Berlin, May 10th, 2021 (The Berlin Spectator) — My plan was to sit on my bicycle, find the most beautiful cherry blossoms in Berlin, shoot them at close range and bring back stunning pictures. I failed. First, I ended up at Mauerpark, where I found two lousy cherry trees that were not in full bloom yet, when it was still windy and cold, on Wednesday. On Saturday, I shot three nice cherry trees at Humboldthain park, located between Berlin’s Brunnenviertel and Gesundbrunnen neighborhoods.

When I returned to the editorial office with a few pictures of those three trees, I came to the conclusion that I had to look for more cherry blossoms in order to have a proper story. Many more. Then it hit me like a truck: I had read Mauerpark, but the place I was looking for actually was at the Mauerweg, also known as the Berlin Wall Path. There, I finally found what I was looking for, namely as many as 1,100 cherry trees in full bloom. Hallelujah!

There seemed to be more cherry trees than there are at Washington D.C.’s Tidal Basin. At the southern Berlin Wall Path, located just a short walk from the Lichterfelde ‘S-Bahn’ train station, they are lined up nicely, for everyone to see. Not only did I find all the cherry blossoms I ever dreamed of, but even more people. The entire city was there, and everyone was mesmerized by those wonderful blossoms.

Families, couples and groups of friends enjoyed picnics between those cherry trees. Hundreds of people were running around with cameras. Every single bloom was shot multiple times. They did selfies, macro shots, wide-angle shots and 4k videos. I just did what everyone else was doing. All of a sudden, I became part of a downright stampede for cherry blossoms. Here I was, a Hamburger in Berlin who had finally found what he had looked for.

Around the cherry trees, residents of those cute little houses in picturesque gardens tried to sell old toys and clothing to the crowds in yard sales, but also offered drinks. For 1.50 Euro, I got a small plastic bottle of warm club soda they had purchased for 29 cents. The man I bought it from told me he did not mind the crowds, also because of their little business set up in the driveway. According to him, the cherry blossoms sometimes bloom in April, and sometimes in May. This year, the season kicked in late.

South of the Border

At some point, I was done shooting. As I was preparing for the 15-kilometer bike ride (9.3 miles) back to Neukölln, I noticed the problem: Berlin’s nicest cherry blossoms are actually not in Berlin, but in Brandenburg. Just a few steps south of the border between the two federal states, the ‘TV Asahi Cherry Blossom Alley’ was created after Germany’s reunification. It was named after the Japanese television station Asashi, which collected donations from its viewers for those trees. They were planted all over the Wall Path between 1990 and 2010.

Hanami, a traditional Japanese cherry blossom festival, is being celebrated right there every year, between Lichterfelde (Berlin) and Teltow (Brandenburg). More cherry trees can be found at Berlin’s ‘Gardens of the World’. All of them, at both locations mentioned, were a gift by the Japanese, just like the ones at the Tidal Basin in the District of Columbia.