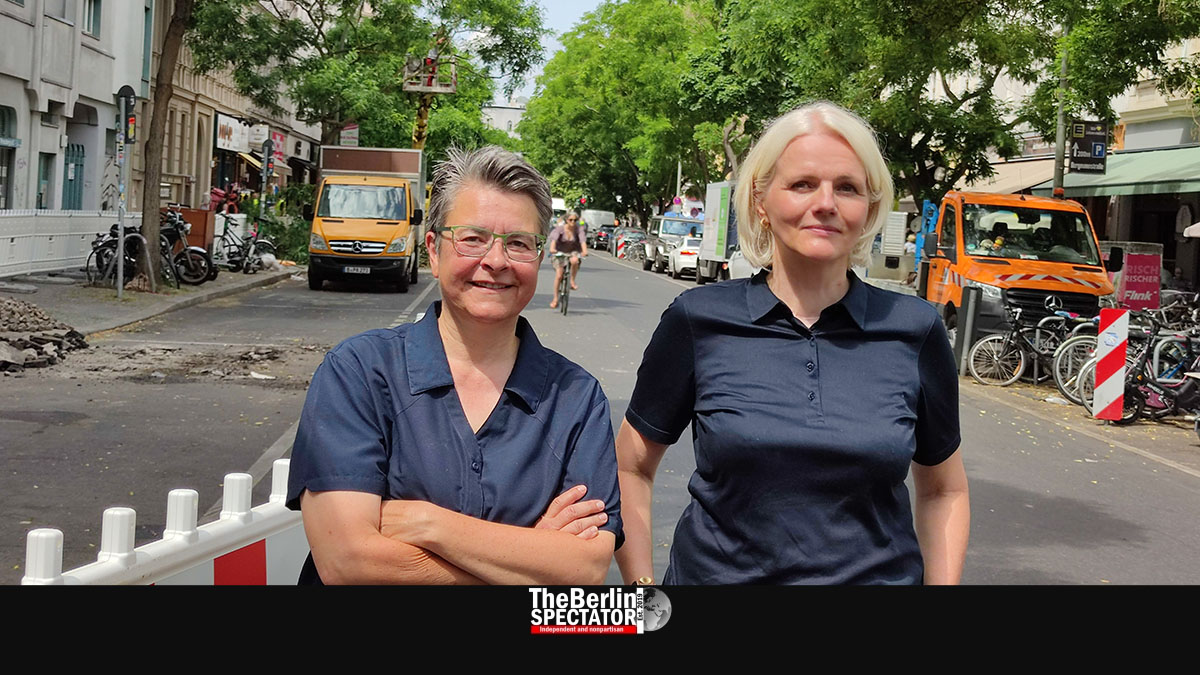 Two ladies, Transport Senator Regine Günther and Kreuzberg’s District Mayor Monika Herrmann, are behind Berlin’s latest bike lane project. Once it is completed, cyclists will have to do something they dislike, namely slow down.

Berlin, June 22nd, 2021 (The Berlin Spectator) — One of the nicest and most expensive parts of Berlin’s Kreuzberg borough will receive the most elegant bike lane of all time. On Monday, a construction crew started working on the new Bergmannstrasse. This popular street with lots of international restaurants and cafés is supposed to become a strolling promenade.

Deceleration is the word. The neighborhood hotshot will not be taking his Porsche 911 for a spin here ever again. That is because the new pedestrian zone will satisfy people who want to engage in an activity called walking, in which they put one foot in front of the other in order to move forward. It is rather slow, but this is exactly what they want. In fact, Bergmannstrasse is supposed to be so slow even bicycles will be obliged to reduce their speed. Guess what the new limit is: 10 km/h (6 mph).

Two women are the driving force behind the efforts to make Bergmannstrasse great again: Both Berlin’s Transport Senator Regine Günther and Kreuzberg’s District Mayor Monika Herrmann are members of the Greens. What they are creating will not only please Berliners or visitors who feel like enjoying a quiet atmosphere while they consume their Sushi, Pad Thai or Nachos Con Queso. The pedestrian zone is supposed to suit insects too. “Water elements” will be installed for them.

The mother of all bike lanes is being installed on the street’s southern side. It will feature two lanes, one in each direction, and little pedestrian crossings. At first, those lanes are supposed to be 3 meters (10 feet) wide. Later, they will be widened. One of the many tasks the construction workers are responsible for is to get rid of the curb. A green area will separate the bicycles from the pedestrians. Between 8:00 a.m. and 11:00 a.m., motorized delivery vehicles may enter. Did they think of absolutely everything? You bet.

In Berlin, the Kreuzberg borough was in the lead in regard to “profound recasts” of this kind, Senator Regine Günther said on site. District Mayor Monika Herrmann added: “We are showing this kind of approach works.” On thing is certain: Bergmannstrasse will get the fanciest infrastructure of them all. But new, modern bike lanes were just installed a mile away from the expensive neighborhood as well, at Kottbusser Damm. On this rather chaotic street, plastic elements installed as boundaries of those bike lanes are already falling apart, just days after they were put there. Some were removed by unknown persons who do not seem to agree with the concept.

Another problem at Kottbusser Damm is the fact that nobody adheres to the no-standing zones. Therefore, delivery vans or trucks cannot park there. Because motorized vehicles just lost one lane in each direction, ambulances, firefighters and the police are having trouble getting through. In case of emergency, they are supposed to bypass the usual traffic jams on those new bike lanes, but nobody told them.