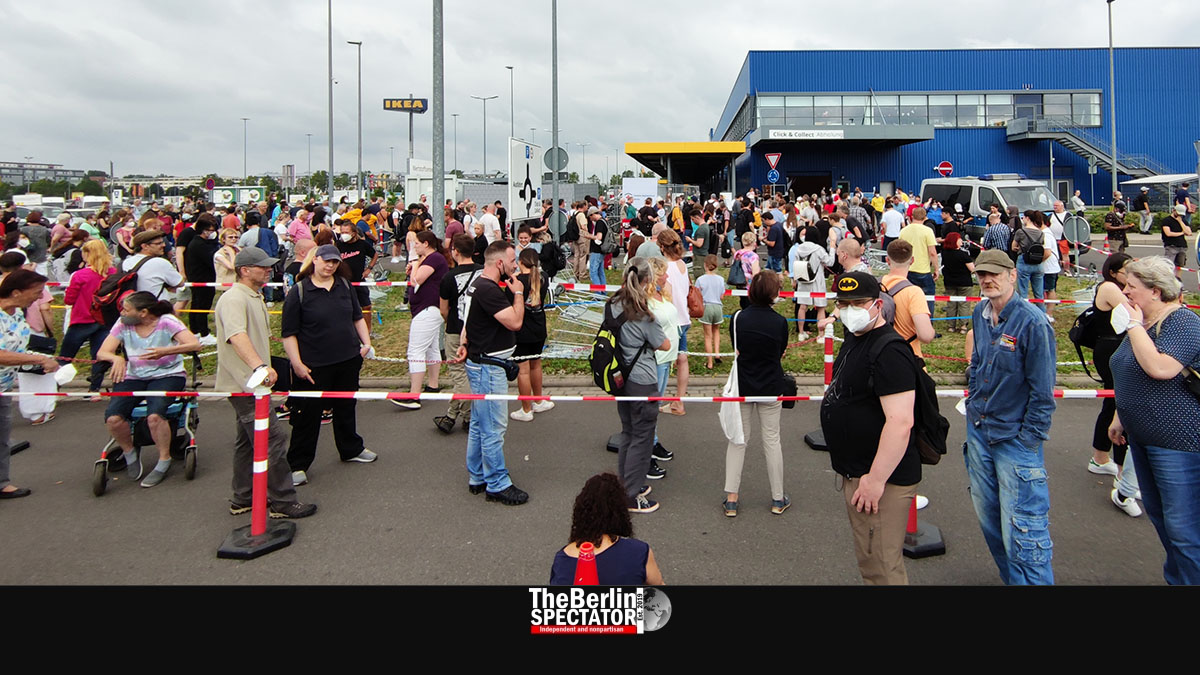 Hundreds of Berliners went to Ikea in their city’s Lichtenberg borough on Saturday. While some intended to purchase shelves and consume ‘Köttbullar’, others wanted vaccinations. The wait for the latter was long.

Berlin, July 18th, 2021 (The Berlin Spectator) — It was rather warm in Lichtenberg when residents came to Berlin’s first drive-in and walk-in Corona vaccination point set up at a large Ikea parking lot. Here, in the eastern part of the city, hundreds of residents stood in line for immunizations with vaccine made by Moderna or Johnson & Johnson. As long as there is enough of it, people have a choice.

Michael Grunst, the District Mayor of Lichtenberg, came to the vaccination point on Saturday at around noon. He said by setting up the facility, Berlin was offering vaccinations to people who could not be reached otherwise. The fact that so many residents had come showed that people wanted to get vaccinated. According to Grunst, the endeavor at Ikea is successful. From the perspective of those who were sent back home because too many people were already waiting, things looked different.

By telling people to return in the next few days, representatives of the local health authority in charge wanted to make sure the long waiting line would not grow any further and nobody would collapse while standing in the heat. An elderly lady who had made it to the front of the line in the early afternoon told The Berlin Spectator she had waited for three hours. According to her, the drive-in line advanced far more quickly.

She was definitely right. While hundreds of persons stood in line for walk-in vaccinations, only about 150 cars waited for drive-in shots at 12:30 p.m.. When it was their turn, motorist would pull up to a spot under a makeshift roof, show their I.D. card, get some paperwork done, roll up their left sleeve, get their shot and leave. While drive-in vaccinations have been offered in the U.S. and other countries for a long time, this is a new approach in Germany.

Berlin’s Health Senator Dilek Kalayci showed up at the vaccination point as well. She talked to some of the people who waited in line and announced the city state was working on setting up more walk-in and drive-in vaccination points. Kalayci stated she was already in talks with Ikea about doing so in front of their branches in Tempelhof and Spandau. The vaccination point in Lichtenberg is supposed to be operational for six weeks. Appointments are not needed. The vaccination offer is limited to Berlin residents.

No Köttbullar on Sundays

The Senator, the District Mayor, representatives from Lichtenberg’s district office and health authority as well as Ikea employees were on site on Saturday. Their mission was to make sure things would run smoothly. A commander of the Bundeswehr, Germany’s armed forces, was at the parking lot as well. He told The Berlin Spectator soldiers were in charge of the administrative work. In Berlin alone, a total of 300 of them are still helping the health authorities in several districts by fulfilling tasks of different kinds.

On Sunday, the vaccination point at Ikea in Lichtenberg will be serving motorists only. That is because it will be simply too hot for long waiting lines. ‘Köttbullar’ meat balls will not be offered today either because the German law forces Ikea and most other retail businesses in the country to remain closed on Sundays.