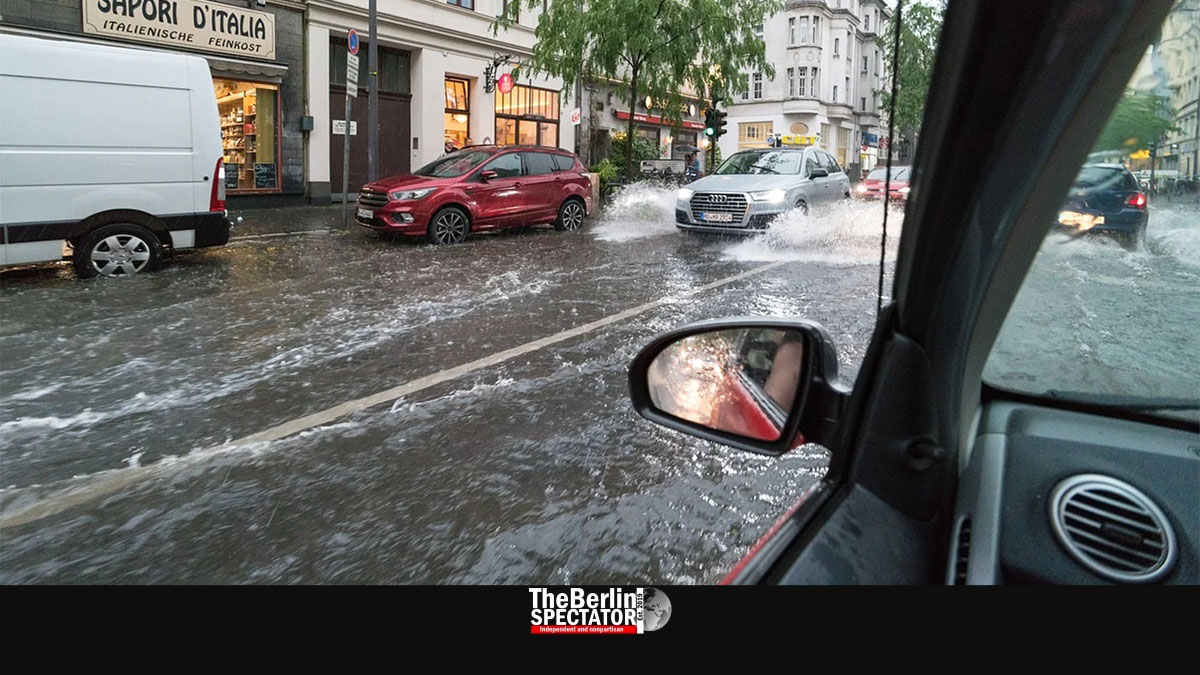 On Sunday, Angela Merkel was going to visit Schuld municipality in Rhineland-Palatinate in order to look at the damage caused by the recent catastrophic floods. The number of victims keeps on increasing.

Berlin, July 18th, 2021 (The Berlin Spectator) — The number of deaths in the floods that hit parts of western Germany earlier this week increased further. According to the authorities in Rhineland-Palatinate and North Rhine-Westphalia, more than 150 residents died. While the water is receding, more and more victims are being found every day.

One of the municipalities affected the most is Schuld in Rhineland-Palatinate. This is where Angela Merkel and First Minister Malu Dreyer were going to inspect the damage and talk to survivors later today. On Friday, the Chancellor returned from a visit to Washington D.C., but she was kept up to date all along. On Saturday, President Frank Walter Steinmeier visited Rhein-Erft county in North Rhine-Westphalia, where many people died and where the devastation caused by the flood is extensive.

“Your fate is heartbreaking”, Steinmeier told residents. He thanked the helpers on site who had gotten beyond their exhaustion point. This was a time of hardship in which the country was standing together, the President stated. First Minister Armin Laschet, who joined Steinmeier during his visit, said aid money was going to be paid out to those affected, in an unbureaucratic way. Laschet, who is also the conservative CDU’s candidate for Chancellor, was harshly criticized because a TV camera caught im laughing in the background while Steinmeier was speaking about the deadly floods. He apologized.

According to the police in Koblenz, 110 residents died in the flood in the district of Ahrweiler alone. As many as 670 people were injured there. Officers and other helpers were busy looking for survivors and victims in this region all night long. The city state of Berlin sent police officers to Rhineland-Palatinate on Saturday. They are supposed to help their colleagues there in the search for missing persons after the flood. Offers of assistance are also coming in from abroad. Israel’s new President Isaac Herzog sent Germany his condolences and offered his country’s help.

In the meantime, Bavaria and Saxony are now affected by new floods. In Bavaria’s Berchtesgadener Land county, the authorities declared a state of emergency after extreme rainfall caused floodings there. In Traunstein, a spokesman for the fire department said the situation as “dramatic” in Berchtesgaden and Bischofswiesen, at Germany’s southern border. Distress calls kept on coming in. More floods were reported in neighboring Austria.

In Saxon Switzerland, a region in the federal state of Saxony, even more floods caused problems that affected Deutsche Bahn’s rail network. Routes from Dresden to Czechia were interrupted. Since the terrible floods in and around Hamburg in 1962, Germany has not seen floods of this magnitude. Global warming is being blamed for the increasing number and intensity of severe weather phenomena.