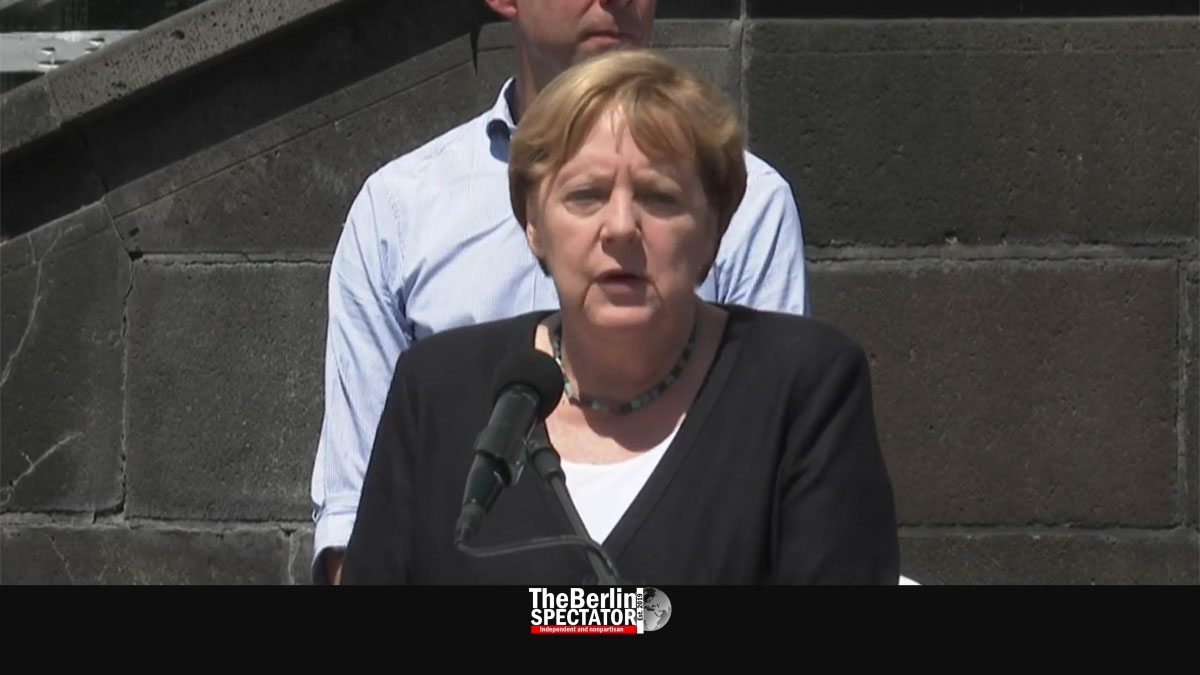 In Rhineland-Palatinate, Angela Merkel got a first hand look at the damage that was done by the floods that ravaged areas in western Germany. She promised the region financial aid and said Germany was the kind of country that could afford the rebuilding.

Berlin, July 18th, 2021 (The Berlin Spectator) — With the First Minister of Rhineland-Palatinate, Malu Dreyer, Angela Merkel visited the municipality of Schuld on Sunday. Afterwards, during a press conference in the town of Adenau, the Chancellor said she had come to get a realistic picture of the “surreal situation” there. Mrs. Merkel said she was shocked. “Our language hardly knows words for this kind of situation”, she stated in front of television cameras.

Angela Merkel said she had picked Schuld for a visit, substitutionally for all other places that had been damaged or destroyed. There was a positive point she made: “It is reassuring to see how people keep together and how much solidarity there is”, Germany’s departing head of government explained. “Here, we see what kind of force nature can have”. Angela Merkel announced she would be back in late August to see how the rebuilding would advance.

For the latter purpose, she promised the people in the devastated regions would “get what they want.” The state and the federal states affected would support the region. Mrs. Merkel said her government would come up with an aid program for medium-term help and the reconstruction of the infrastructure. Vice Chancellor Olaf Scholz, who visited North Rhine-Westphalia, Rhineland-Palatinate and Bavaria, where torrential rain did damage on Saturday, promised those affected 300 million Euro (354 million U.S. Dollars or 275 Pounds Sterling) in emergency aid. Later, billions are supposed to be made available for the reconstruction.

After her visit to Schuld with the Chancellor, Malu Dreyer thanked her for coming. She said 112 people had died in her state alone, 670 had been injured in Rhineland-Palatinate and many were still missing. The First Minister thanked the helpers on site, including the police, the rescuers and the Bundeswehr soldiers who were involved in looking for survivors and victims. The rebuilding was a national task, Malu Dreyer said.

The floods which hit the region in western Germany ripped apart houses, destroyed businesses, pedestrian zones, streets and roads, including parts of the Autobahn there. Several railroad bridges were swept away. The actual number of deaths is not known yet. Countless survivors were taken to emergency accommodations. Many went to live with relatives or friends.

The fact that thousands are still without power is the least of the problems. In some areas, there is no water distribution anymore. It will take months until the power supply lines and water pipes will be repaired. The floods damaged power stations, factories and businesses as well. Mobile phone base stations are affected too. This is the worst flood Germany has seen since 1962, when more than 300 people died in and around Hamburg.