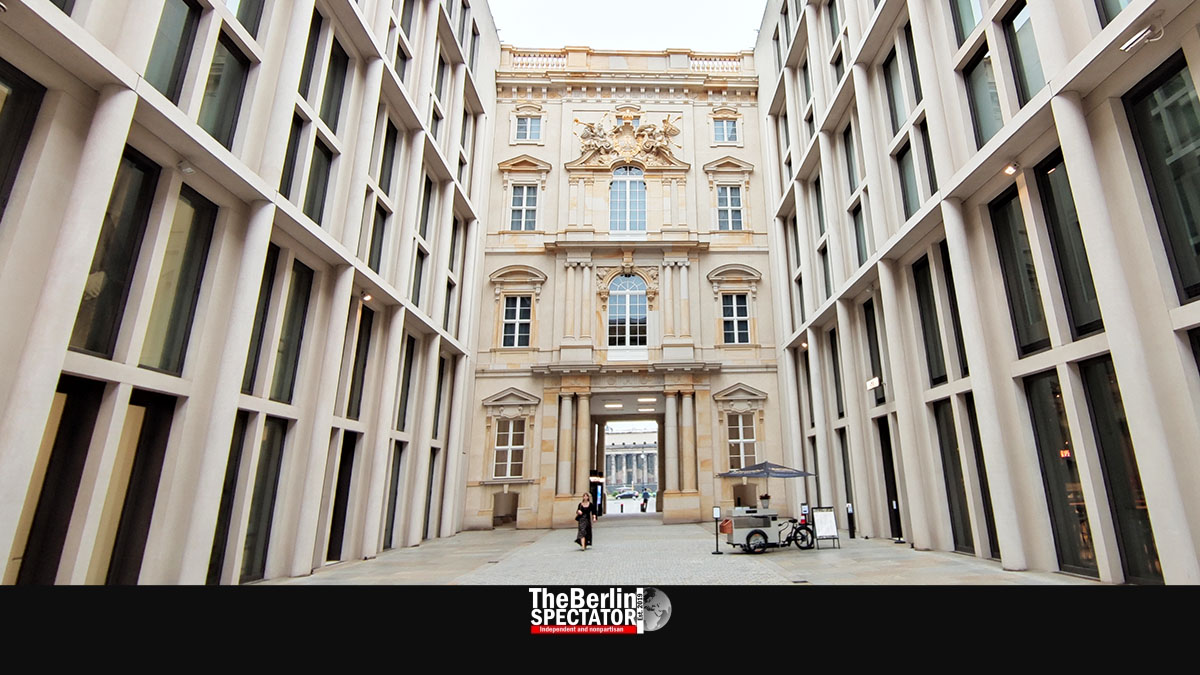 Eight years after the construction of the Berlin Palace began, visitors may now enter the building also known as the Humboldtforum. There is a lot to see.

Berlin, July 21st, 2021 (The Berlin Spectator) — The Berlin Palace is one of the most fascinating buildings in Berlin, also because it was built three times. Its first version was erected 578 years ago, in 1443. Over time, it grew, became more elegant and accommodated all kinds of rulers, including the Kings of Prussia. During the time of the Weimar Republic, the Berlin Palace housed a museum and a concert venue. In 1945, 502 years after it was built, the it was badly damaged when the Allies bombed Berlin shortly before they finally defeated Nazi Germany.

Instead of reconstructing or at least saving the remains of the building after the war, the communist GDR took a different approach. It had the historic building’s ruin blown up. Another few decades later, after Germany’s reunification, a reconstruction was discussed. First, people were supposed to see what the original looked like. So, a fake version of the Berlin Palace was set up. This second version of the Palace consisted of a giant, cubical scaffolding the size of the original building, and plastic backdrops with a French-made painting of the original building.

In 2013, the construction of the third version of it, the Humboldtforum a.k.a. the Berlin Palace, commenced. There were some delays. When the sensational new building with three baroque façades and one modern one was finally completed 683 million Euro (805 million U.S. Dollars or 591 million Pounds Sterling) later, in 2020, Corona messed up its inauguration. At least there was a virtual one. But finally, on Tuesday, July 20th, 2021, the Humboldtforum opened to the public.

As many as six exhibitions are being offered. ‘Nimm Platz’ is one of them. It was set up for children from 3 years of age and looks into the culture of sitting. The next one, ‘Berlin Global’, is about the city and its connections in the world. Yet another exhibition entitled “Schrecklich schön. Elefant – Mensch-Elfenbein” was organized in cooperation with the National Museum of Kenya. It is about ivory and looks into its trade in a very critical way.

In the staircase of the Humboldtforum, its name givers are being introduced. ‘Einblicke. Die Brüder Humboldt’ (‘Insight: The Humboldt Brothers’) looks into Wilhelm and Alexander von Humboldt. Is there more? Sure. One exhibition, which is scattered all over the Humboldtforum, deals with the building itself. It even contains lamps that used to be installed at the GDR’s asbestos-infested ‘Palace of the Republic’ which stood in the way when the Berlin Palace was rebuilt. It had to be removed first.

The sixth exhibition at the Humboldtforum is being presented by the Humboldt Lab which is part of Humboldt University. ‘Nach der Natur’ is about climate change and the extinction of species.

The best part is the fact that admission is free for the first 100 days. But, because of Corona, tickets for time slots will have to be booked here.