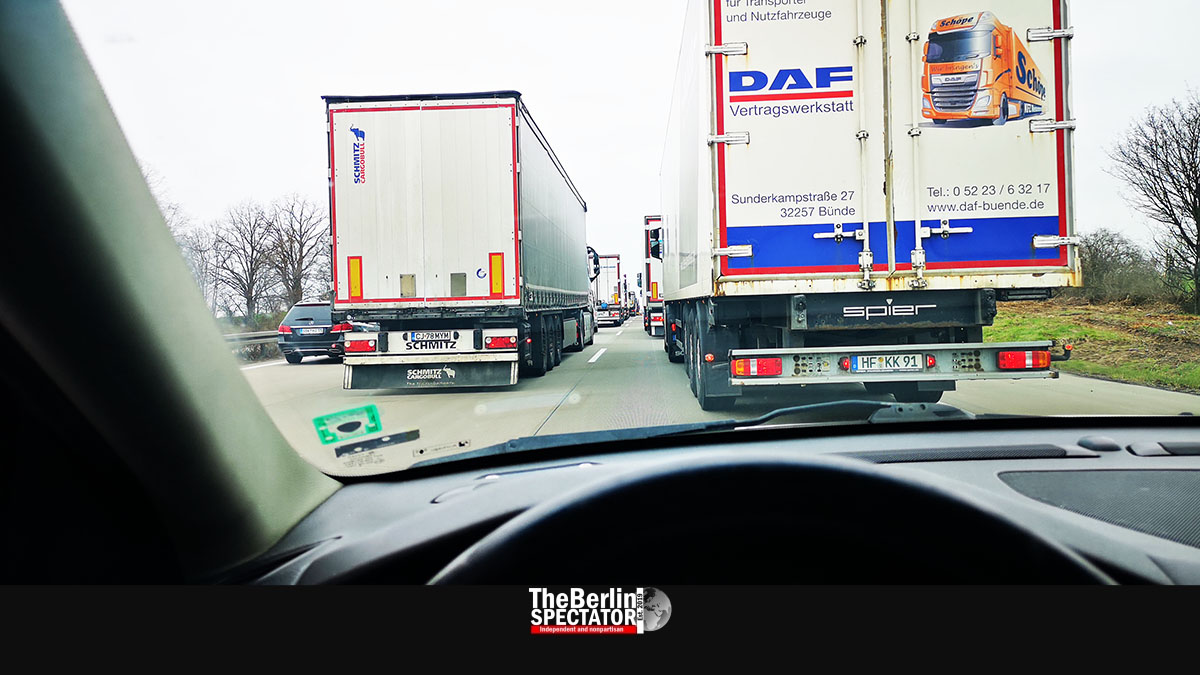 There is bad news and more bad news: The bad news is that there will be rather bad traffic jams on Germany’s Autobahn network next weekend. A week later, things will be a lot worse.

Berlin, July 22nd, 2021 (The Berlin Spectator) — Germany’s Autobahn network has a total length of 13,183 kilometers (8,192 miles) even though the distance from the country’s southernmost point to the very north is only 1,000 km (621 miles). There are many north-south connections and a few big traffic arteries from east to west and vice versa. Let’s not forget the diagonal ones and the many ‘Autobahnen’ (plural) in the Ruhr area. The Autobahn is a great road to travel on, except when hell breaks loose. Sometimes, especially is summer, it tends to ‘brake’ loose as well, meaning motorists will be stepping on their brake pedals a lot more than they hit the kickdown.

There are many busy holiday weekends, especially in summer. In order to decrease traffic, Germany’s federal states have different summer holiday dates. Some states begin their school vacations in mid-June and end them in late July, others begin in late July and end them in early September. All of this would be very smart and awesome, at least more or less, if it worked, which it does not, and if there was no weekend of hell. The problem is that there is.

If there is one weekend on which people should definitely stay away from the Autobahn, it is the one which commences on July 30th, 2021. So, why would that be? Because all sixteen federal states are on summer holidays then. The Baden-Württembergers and Bavarians start their vacations on the 30th. This aspect alone is a problem which translates into expected traffic jams all over the place. In Mecklenburg-Hither Pomerania and Schleswig-Holstein, the vacations end on this very same weekend.

At the same time, the Berliners, Brandenburgers and Hamburgers (yes, with cheese and onions) usually start returning home a week before their holidays end, meaning on the very same weekend from July 30th to August 1st. Residents from all remaining federal states will be on the Autobahn as well, because they might feel the inner urge to add to the big mess. Wonderful.

So, what do Germany’s traffic experts say? The General German Automobile Association (ADAC) is still dealing with another problem they see. They have not even gotten to the weekend of hell because there will be another one beforehand. From July 23rd to 25th, 2021, they see about a million issues on the Autobahn. Ready for those? Here we go: The vacations will be commencing in Lower Saxony, Bremen, Saxony-Anhalt, Saxony and Thuringia. More travelers from Saarland, Rhineland-Palatinate and the neighboring Netherlands will be populating the Autobahn.

All of this is pretty bad already, but there is more: Because of Corona, most Germans will be spending their vacations in their own country. Guess what this means in regard to the Autobahn situation. Yes, traffic jams in all directions and on all stretches. Virtually all ‘Autobahnen’ will be affected. There is no escaping the mess on the roads. The first few summer weekends were already bad, in this regard, and things will not be improving now. The opposite is the case.

Believe it or not, but there are 800 construction sites on the Autobahn right now. Will they help the traffic flow? Take a wild guess. According to the ADAC, some Autobahn stretches will be shut down at the worst moment imaginable, including the A49 from Kassel to Giessen between Borken and Neuenthal. Of course they picked July 31st, the worst traffic day of the year. The A66 between Wiesbaden and Frankfurt is already closed in both directions, between Wiesbaden-Biebrich and Wiesbaden-Mainzer Strasse. Great.

Have we finally gotten to the end of the list of problems? You wish. Because of the floods that hit parts of western Germany last week, lots of highways and some Autobahn stretches in Rhineland-Palatinate and North Rhine-Westphalia need to be repaired. Many are closed, including the A1 and the A61 in the affected areas. The repair will take months. On top of it all, the roads to the Alps and other tourist magnets will be crammed, including those in neighboring countries. Let’s not even mention the border crossings in Eastern Europe. Bon voyage.