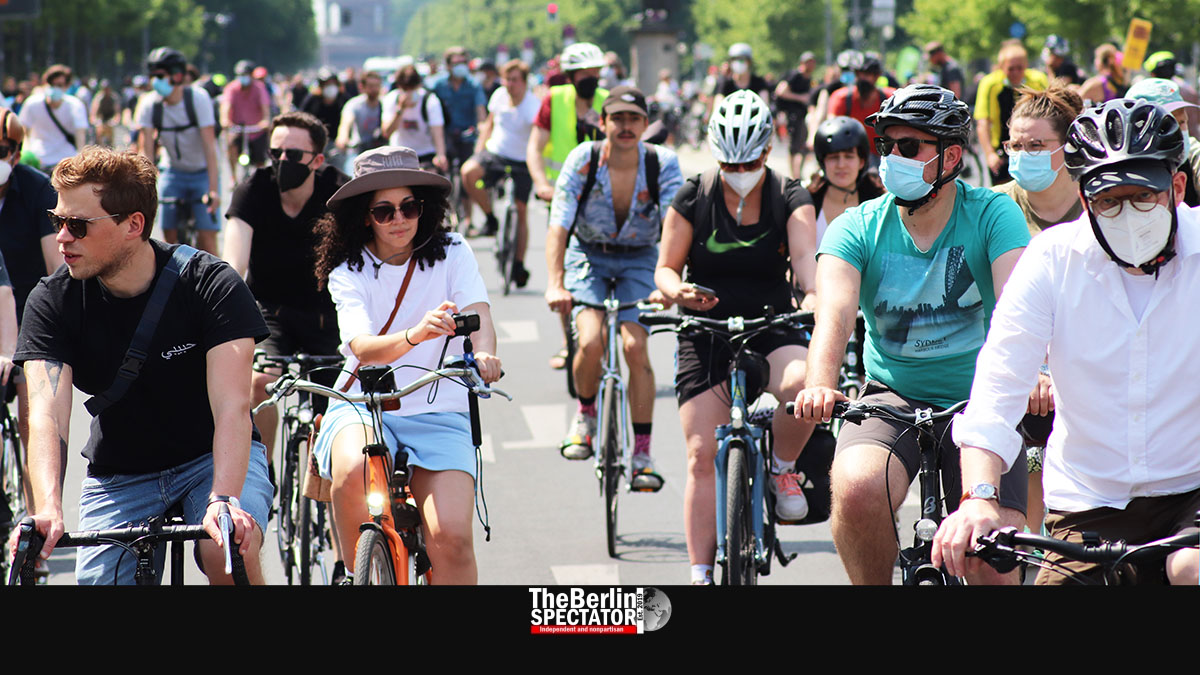 Counting the stars in the sky is difficult. The same applies to counting the number of oat flakes in one bag. But counting bicycles that pass by is easy, especially for those who have bike counters and ‘bicycle barometers’. It also makes more sense.

Berlin, July 28th, 2021 (The Berlin Spectator) — Berliners ride their bikes like crazy. In the past four years, the bicycle traffic density has increased by approximately 30 percent. The Corona crisis made people rethink things, including their CO2 footprint. By purchasing bicycles or using their old ones more, residents want to improve their health. Besides, nobody will get infected with Corona on their bicycle. Public transport is more dangerous, in this regard.

Also, trips within Berlin by bicycle are usually almost as quick as those taken by car, bus tram, ‘S-Bahn’ or ‘U-Bahn’ train. On top of it all, going by bike is cheaper. There is not a single disadvantage about going places on velocipedes. Well, o.k., there is one: They do not have ashtrays.

Berliners do not only ride their bikes, but they also count their bike trips. The Senate Administration of Transport and the Environment just had a brand new ‘bicycle barometer’ installed at ‘Strasse des 17. Juni’, across the street from the Technical University. The device is supposed to count all cyclists who ride by in real time. It has two purposes. One of them is to motivate people to use their bicycles even more. The other purpose is to keep track of bicycle traffic.

“Each bike ride counts”, Transport Senator Regine Günther stated. “This is the message the ‘bicycle barometer’ conveys.” She said the fact that more and more Berliners chose their bicycles as means of transport was good news. Berlin’s bike infrastructure would be taken to the next level, the Senator announced. The projects the Senate and the districts are working on in this regard include new bike lanes, refurbishing existing ones, new bicycle streets and bicycle highways.

In order to know where the bikes are, where they go, when they move, and when those cyclists return home from work, Berlin has been installing bike counters for a while now. More will be coming soon. At this stage, there are eighteen of them, eight in the outskirts of the city, and ten in and around the center. Those counters provide interesting numbers.

Oberbaumbrücke, a major bridge across the Spree river, is the spot most frequented by cyclists. Since this year began, 1.38 million of them have been counted there. Another important bike spot is Berliner Strasse. The counter installed there registered 1.13 million bikes since January 1st. At Yorckstrasse, just over a million cyclists were counted in the same time period. On Monday alone, 9,408 bikes crossed Oberbaumbrücke.

Now, there is one open question: What in the hell is the difference between a ‘bicycle barometer’ and a bike counter? The counter just counts without spitting out any results on site, while the ‘barometer’ has a display which keeps people up to date. The numbers Berlin’s bicycle counters provide can be checked here.