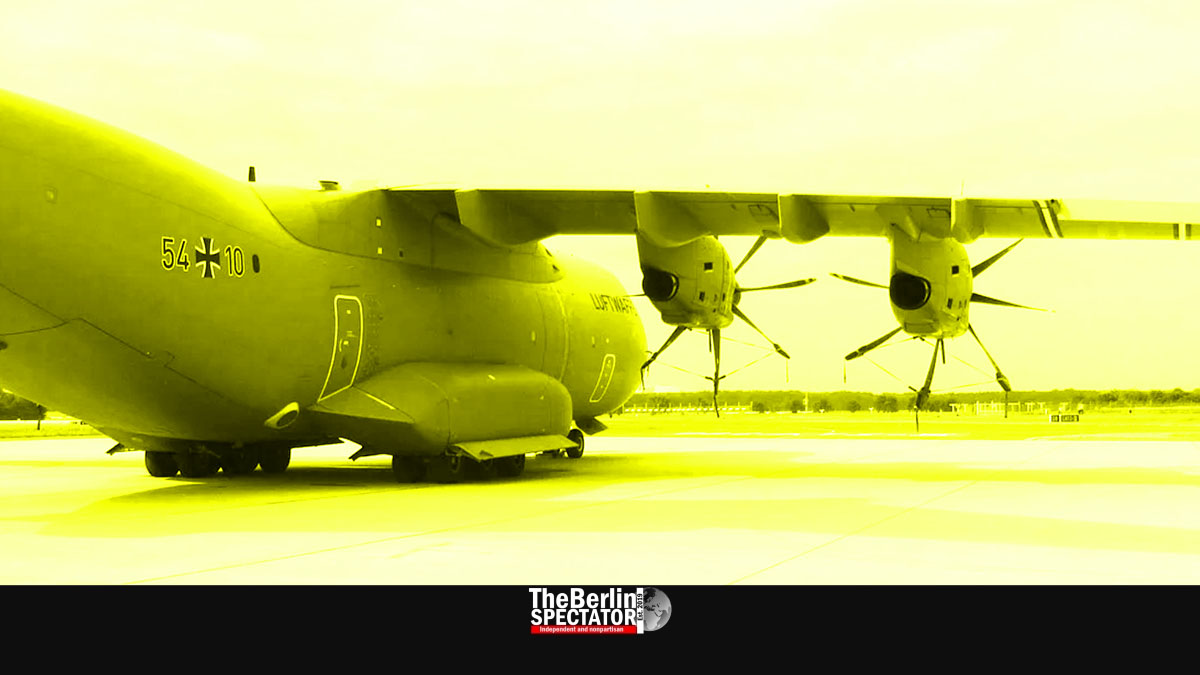 In Afghanistan, Germany’s Bundeswehr depends on the American armed forces. Because the latter are supposed to leave Kabul airport and Afghanistan by Tuesday, the Germans are forced to end their airlift from the Afghan capital via Tashkent to Germany.

Berlin, August 25th, 2021 (The Berlin Spectator) — According to a media report, Germany will end its airlift from Kabul airport later this week. ‘Business Insider’ reports, it could happen later this week. Friday might be the day on which the last German Air Force plane flies from Kabul to Tashkent in neighboring Uzbekistan. The Foreign Ministry and the Defense Ministry in Berlin were still working on the details, the report says.

The end of the airlift has to do with U.S. President Joe Biden’s plan to get all troops out of Afghanistan by August 31st, which is next Tuesday. Months ago, the United States had announced their armed forces would be pulled out by September 11th, which is the 20th anniversary of the terror attacks in New York City, where the twin towers of the World Trade Center were destroyed by two hijacked passenger aircraft, and in Arlington/Virginia, where a third plane hijacked by Al Qaida operatives hit the Pentagon. A fourth plane crashed on a field in Pennsylvania that day. Almost 3,000 people were killed.

Germany depends on the U.S., meaning its Bundeswehr cannot defend Kabul airport or itself without the American partners who have some 5,800 soldiers on site right now. After the U.S. forces pulled out of Afghanistan earlier this month, the Taliban returned to Kabul much sooner than expected. In Munich, Markus Söder, the First Minister of Bavaria, called the pullout “a mistake”.

So far, the German Air Force has flown out 4,650 German and Afghan citizens as well as nationals from other countries. The Americans are flying evacuees to Ramstein Air Base in Germany. But because the location is filling up rapidly, they are using another base in Kaiserslautern too.

After a G7 video summit, U.S. President Biden said the sooner the operation ended, the better it would be. Ursula von der Leyen, the German President of the European Commission, stated there needed to be “safe and legal escape routes” from Afghanistan for women and children. During the G7’s video summit, Chancellor Angela Merkel announced Germany would provide emergency aid in the amount of 100 million Euro (117 million U.S. Dollars or 86 million Pounds Sterling).

Several federal states in Germany are ready to welcome refugees from Afghanistan, including persons who worked with the German troops during their 20-year mission there. According to Governing Mayor Michael Müller, 192 refugees have arrived in the German capital so far. Because of the chaotic situation in Kabul, the Afghans are supposed to go through all bureaucratic procedures in Berlin, before some of them are sent to other parts of Germany.

Today, the Berlin Bundestag was supposed to discuss the mission in Afghanistan, the pullout and the airlift. The government is expected to be criticized by the opposition, including the center-right FDP, the center-left Greens and the extremist right-wing AfD.