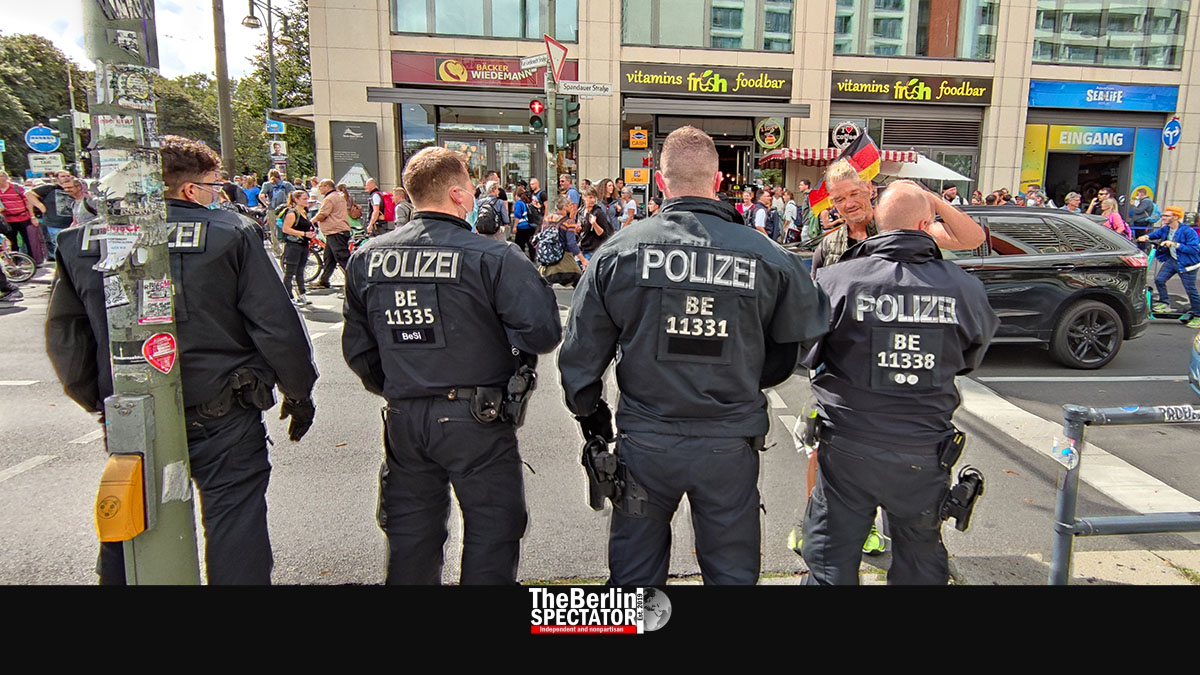 Thousands of conspiracy theorists who believe Germany is a “Corona dictatorship” protested in Berlin today, in spite of the fact that the rallies they had registered were banned. The police arrested and surrounded participants.

Berlin, August 29th, 2021 (The Berlin Spectator) —  In Berlin, 2,200 police officers from several federal states were on duty on Sunday. They tried to keep thousands of Corona deniers from participating in protests that had been forbidden in advance. According to the Berlin Police Department’s press office, officers surrounded 80 protesters at Danziger Strasse in the afternoon, including violent persons and ringleaders who called on other participants to disobey the Corona rules and ignore the ban.

A similar situation was reported in Rykestrasse. In these cases, everyone’s ID cards were checked before the police let the protesters leave. But arrests were made as well. The overall situation was chaotic, just like last time, on August 1st, when thousands of Corona deniers marched through the streets of Berlin unhampered by police. Again, there were countless groups of them today. The police tried to keep track of them from a helicopter which flew back and forth above Berlin all day long.

At the intersection of Karl Liebknecht Strasse and Dircksenstrasse, ten officers observed a situation, when a group of about thirty Corona deniers arrived. They were prevented from blocking the traffic at the intersection. One participant tried to provoke an officer. He held his cell phone right in front of the policeman’s face and took a photograph of him. Instead of stopping this individual, two officers shouted at The Berlin Spectator’s reporter for standing too close to them, even though he was 5 feet away.

On Saturday, conspiracy theorists from several parts of Germany had started staging their rallies in spite of the ban. On this day alone, 80 protesters were arrested temporarily. During the weekend, police officers were attacked and injured. On Sunday, unknown persons threw a cobblestone at a police vehicle and damaged it, according to the RBB radio and TV network.

Several of the thirteen banned protests were registered by members of the ‘Querdenken’ organization of conspiracy theorists and similar groups. They keep on calling for democracy, even though this is exactly what they have in the Federal Republic of Germany. Members of these groups say the country was a “Corona dictatorship”. On Telegram channels, members spread the weirdest theories.

This weekend, one of the main tasks for the police was to protect the government quarter, a year after protesters managed to break through a police barricade at the Reichstag building. On Saturday, officers used pepper spray in order to prevent participants of the illegal rallies from getting close to it.