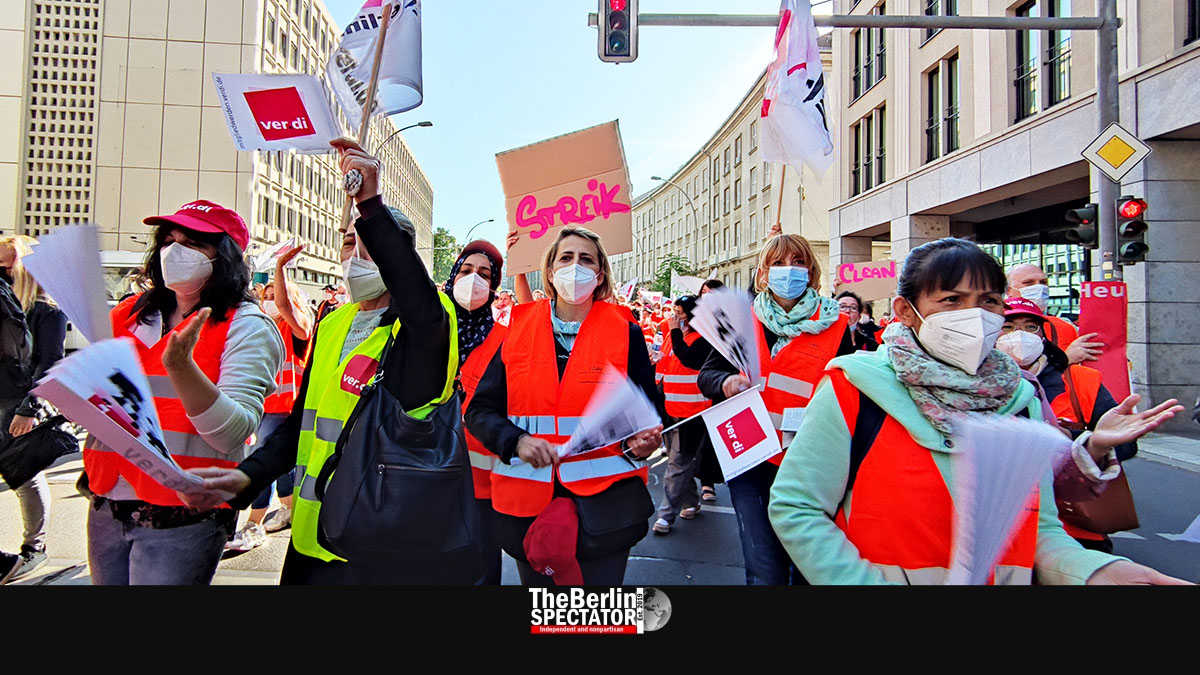 In Berlin, hundreds of nurses are supposed to be on strike again on Monday. Their union Verdi says the latest offer that had been put on the table by the employers was “disappointing”.

Berlin, September 11th, 2021 (The Berlin Spectator) — In Berlin, nurses employed at clinics run by the state-owned Vivantes and Charité hospital chains are supposed to be on strike again on Monday. The walkouts began on Thursday, but were partially interrupted this weekend. So far, the strike has led to tight situations at the emergency admission and other departments at several hospitals.

On Thursday, hundreds of nurses and staffers employed by subsidiaries of the state-owned companies had staged a large protest march from Berlin’s Senate Administration of Finance to the Health Department. They had carried signs saying “We are worth it” and “Nothing works without us”. The walkouts were supposed to put the employers under pressure. But they said they would not continue the negotiations while the strike was going on

Vivantes reportedly made a new offer on Friday, which was described as “disappointing” by Verdi. This is what the union’s negotiator Kristof Becker told the RBB radio and TV network. Verdi discussed a possible suspension of the strike, but finally decided against it. According to the union, the latest offer lacks actual numbers in regard to night shift payments and sick pay. It did include improvements for the employees of subsidiaries responsible for cleaning and catering at Vivantes and Charité hospitals though, Becker told the network. Now, conciliation proceedings might — or might not — lead to some progress in the negotiations.

At the Charité, nurses are still on strike while the walkouts other employees were involved in had been limited to Thursday and Friday. For the nurses, Verdi is demanding an easing of the burden they carry day by day. The union says many of its members were overworked. For instance, there needed to be a minimum number of nurses per shift in each department in order to get rid of some of the pressure they were under.

The strike among nurses at the Charité is unrestricted in the sense that no date was set for its end. While the treatment of patients in emergency cases is guaranteed, hundreds of doctor’s appointments at hospitals that are part of the chain had to be cancelled or postponed.

Vivantes in Berlin informed the public about the ongoing walkouts. “We are trying to avoid possible restrictions for patients”, a message read. But it also said that affected persons would be notified as early as possible. The Charité spread the same message, word by word. It installed a hotline patients can call if they have questions regarding their treatment. The number is 030-450 550 500.