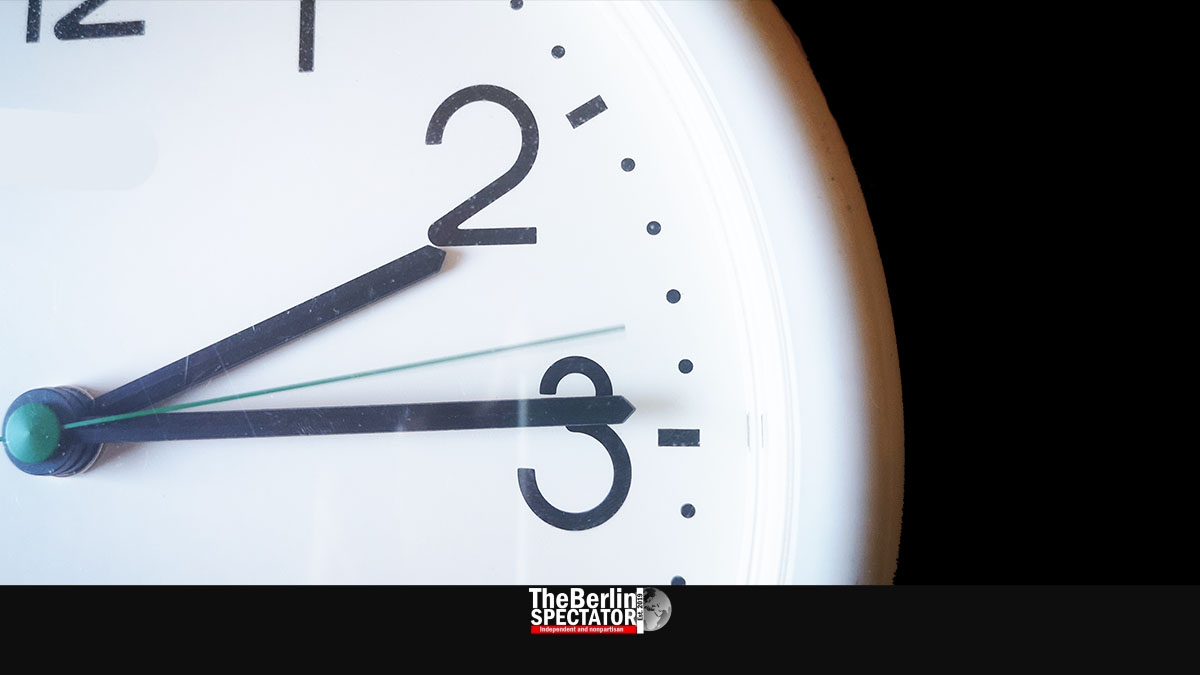 In most countries on the continent, the time change hardly anyone wants takes place on Sunday in the early morning hours. Nobody knows how long the flip-floppiong will go on.

Teupitz (Brandenburg), October 30th, 2021 (The Berlin Spectator) — If it was up to a big majority of Germans and other Europeans, the time change the continent goes through twice a year would be dumped immediately. The European Parliament wants to end it, so do the E.U. member states. The problem is that they are procrastinating.

On Sunday, October 31st, 2021, at 3:00 a.m., the time will be turned back by one hour, meaning the hour between 2:00 a.m. and 3:00 a.m. will be taking place twice. The advantage is that people can sleep one hour longer. It is the hour they lost six months earlier, when the regular time was replaced by daylight saving time.

Of course, clocks on smart phones and computers do the time change themselves. But conventional watches or clocks do not. Nobody needs to get up at 3:00 a.m. though. Turning them back in the late morning, or in advance, is definitely good enough.

Those time changes are supposed to save energy by adapting to daylight time from sunrise to sunset. But, as it turns out, the changes do more damage than good. Contrary to the assumptions of those who put the time changes in place, hardly any energy is actually being saved. In addition, people’s health might be affected in a negative way. Each time change is like a little jet lag the body needs to get used to.

Another disadvantage is the confusion the switches cause every time. Nobody ever knows whether the clocks need to be set back or forward. Besides, countries on the other side of the Atlantic Ocean, including the United States of America, change their time on different dates, which adds to the confusion. This year, the daylight saving time in most of Europe applied from March 28th until October 31st. The Americans turned their clocks forward on March 14th and will go back to regular time on November 7th. That way, the time difference between the U.S. and Europe changes four times a year.

According to polls, more than 80 percent of all E.U. citizens have enough of those time changes. It is unclear when their wish to end them will finally come true. The E.U. members have to take decisions. In their capitals, the parliaments need to decide whether or not they want to end the time changes, and which of the two times they intend to use for good. Do they want to live in what the Germans call “winter time” all year long, or do they want the “summer time” to apply 365 days per year?

There is one thing Europe needs to avoid: If the E.U. member states take different decisions, there might be time differences all over the continent. In theory, it could be 3:00 p.m. in Rome, Prague, Warsaw, Amsterdam and Madrid while it is 4:00 p.m. in Berlin, Zagreb, Paris, Luxemburg City and Vienna. Who wants this kind of big mess? Nobody.