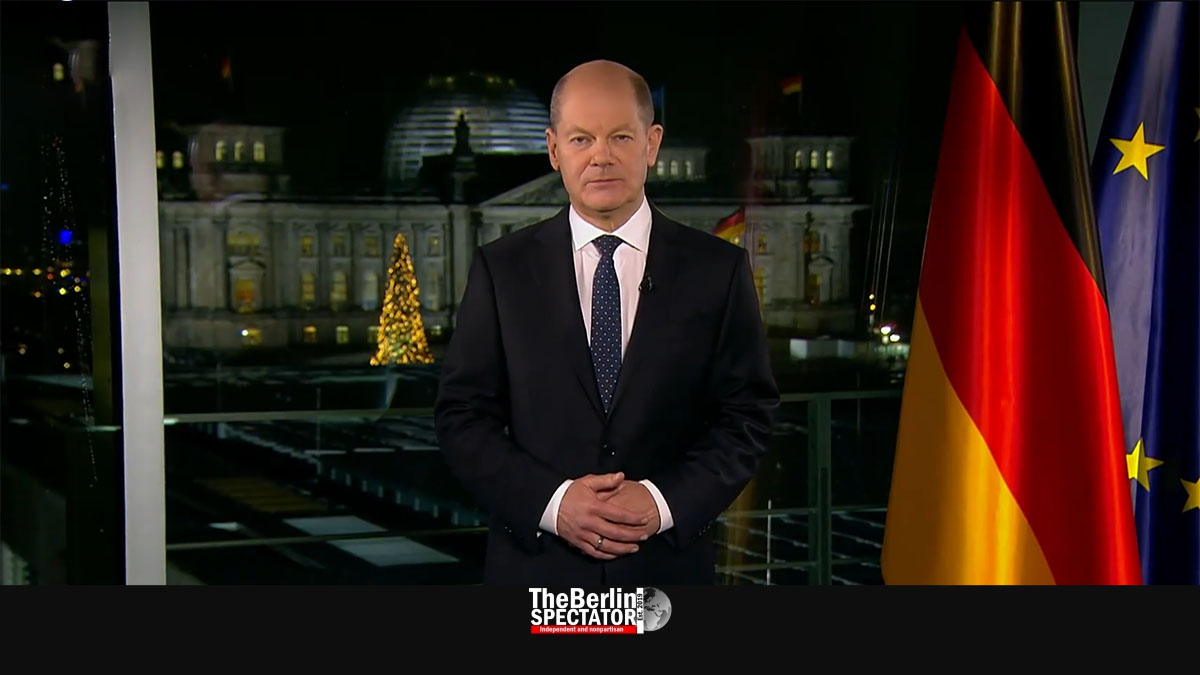 In his first new year’s speech as Chancellor, Olaf Scholz asked the nation to stick together in order to defeat the Coronavirus in 2022. He also asked for people’s understanding in regard to Germany’s Corona restrictions.

Berlin, December 31st, 2021 (The Berlin Spectator) — On Friday evening, Olaf Scholz’ first new year’s speech as Chancellor was broadcast. He called for solidarity. Together, Germany needed to do everything to defeat the Coronavirus. He called on people to accept the Corona vaccinations the country was offering them, also because of the more contagious Omicron mutation. Scholz also asked them to accept the new contact restrictions that were put in place on Tuesday.

‘Quicker than the Virus’

The year 2021 had challenged everyone, Scholz stated, because of the Corona pandemic, but also the flooding in North Rhine-Westphalia, Rhineland-Palatinate and Bavaria in summer. There was one positive aspect, Scholz said: Germany’s society had accepted and met these challenges.

He thanked people who were working for the common good, for people’s health and safety. The new head of government mentioned doctors, nurses and others in hospitals, doctor’s offices and vaccination centers, police officers and Bundeswehr soldiers. He also thanked residents who follow the rules. “Please take the restrictions seriously, for your protection that that of your families.” Olaf Scholz stated people who were not vaccinated yet should get their shots now, and those who were needed to get their booster immunizations. “This is about speed. We need to be quicker than the virus”, the German Chancellor stressed.

Scholz also talked about his new government’s plans in regard to ecology and the economy. The 2020s would be “a decade of awakening” which included the German economy’s biggest remodeling ever. He also said the Federal Republic needed to reach its set climate goals and make sure its technology remained the best in the world. Germany had all it needed, including skilled labor, smart engineers as well as active handicraft businesses and companies. On top of it all, Olaf Scholz announced Germany would use its presidency at the G7 to make this group of states forerunners in regard to “climate-neutral economies and a just world”.

Berlin’s new Governing Mayor Franziska Giffey, who is a member of the center-left Social Democrats (SPD), just like Scholz, held a new year’s speech as well. The Berlin Senate would do everything it could to protect people’s health and fight the Corona pandemic, she promised. Corona had been the main challenge in 2021. All in all, it had been a good year. She mentioned the setup of the new cardiac center at the Charité hospital, the Siemensstadt Square, a place “for science and living” in the German capital which is supposed to be completed by 2030, the completion of the ‘U5’ subway line, and the Senate’s “school construction offensive”.

Creating affordable living space had the highest priority, Franziska Giffey assured the Berliners. Apart from Corona, the affordable living crisis is Berlin’s biggest problem. Under her predecessor Michael Müller, the Senate put in place what it called a “rent cap”. This measure was supposed to freeze the rents for five years, but it was sacked by Germany’s Constitutional Court.