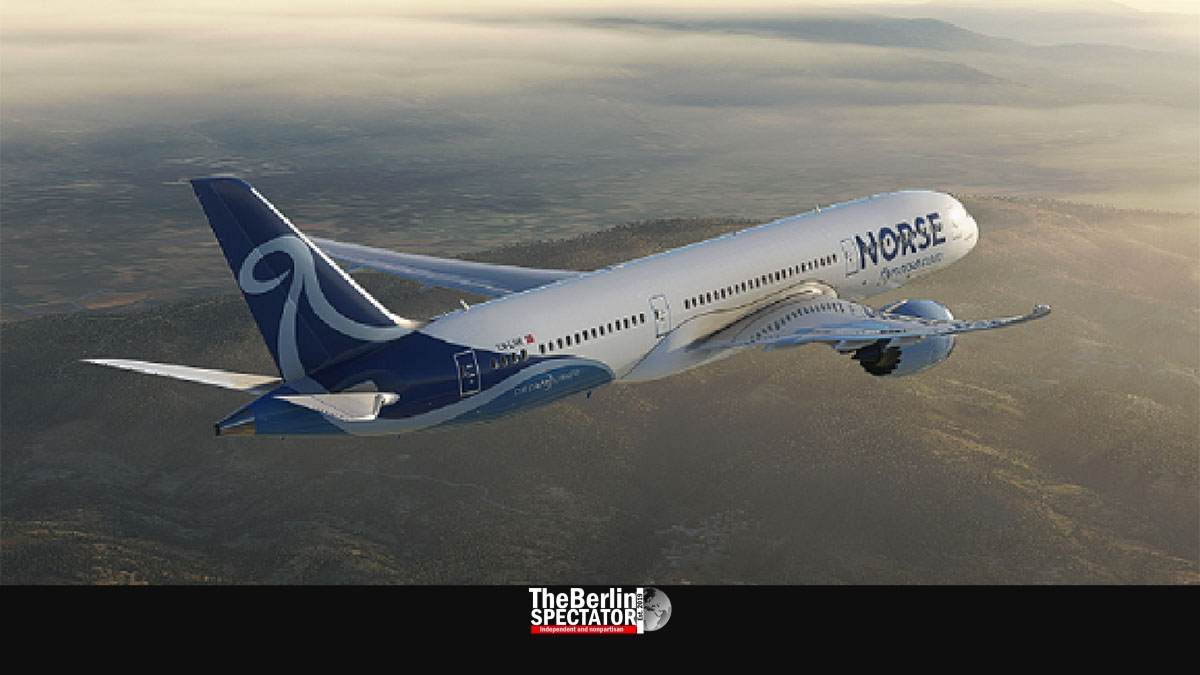 Only very few intercontinental flight connections are available from or to the Berlin Brandenburg Region. The good news is that two more will be added in summer. Norse Atlantic Airways says it will connect BER Airport to Los Angeles and New York City.

Berlin, June 9th, 2022 (The Berlin Spectator) — Passengers who cherish direct flights to destinations on other continents but still insist on taking off from BER Airport in Schönefeld do not have that many choices. Sure, they can get to Tel Aviv, Doha or Dubai. The long-distance options they have until now are Singapore and Newark. United Airlines revived its route to New Jersey earlier this year.

In order to get to other intercontinental destinations, passengers are forced to go through Frankfurt or Munich. Or, of course, they can will find flights to most cities in the world when they change planes in Amsterdam, Brussels, Paris, Madrid, Rome or London. The sky is the limit here.

But BER Airport is becoming a little more important now that a brand new Norwegian carrier is offering direct flights to John F. Kennedy Airport in New York City and to Los Angeles. The first ones are supposed to take off in mid-August. Those flights to JFK will leave and arrive on a daily basis from August 17th, 2022. Starting on August 19th, Norse intends to take passengers to LAX three times per week, on Wednesdays, Fridays and Sundays.

Norse is a budget airline, meaning the flights it offers can be inexpensive depending on the season and how far in advance they are booked. Founded in 2021, the company uses Boeing 787s, also known as Dreamliners, for its intercontinental flights which can be booked here. A test search for a return flight from BER to LAX at the end of August or the first days of September just gave our editor this offer:

“Norse Atlantic Airways also appeals to people who have not thought about trips to the United States of America”, BER Airport’s CEO Aletta von Massenbach said. “The airline flies modern and quiet equipment with a low kerosene consumption.” The new flight routes were good for the connection the German capital and the region around it had to the U.S..

The fact that BER Airport is not the kind of airline hub one would expect to have in (or close to) a European capital has to do with Germany’s history. Until the country’s reunification, Lufthansa was not allowed to fly to Berlin at all. That is why Frankfurt got West Germany’s main airport. As it was located in the middle of the old Federal Republic, it was relatively easy to reach for everyone. Franz Josef Strauss Airport in Munich is the second-most important hub in Germany, in regard to the number of flights to intercontinental destinations.

The Berlin Spectator needs your support. Do we enjoy asking our readers for donations? No. We wish we did not have to, but we do. The truth is that this publication is on shaky ground.
You can support us via Paypal (one-time or monthly donations) or become a patron on Patreon (monthly donations). If you want to, you can read our Donations Page first.
We thank our 15 regular supporters very much. Without you, we would have given up a while ago.
But, in order to make The Berlin Spectator a stable project, the support would have to be increased substantially. Thank you.