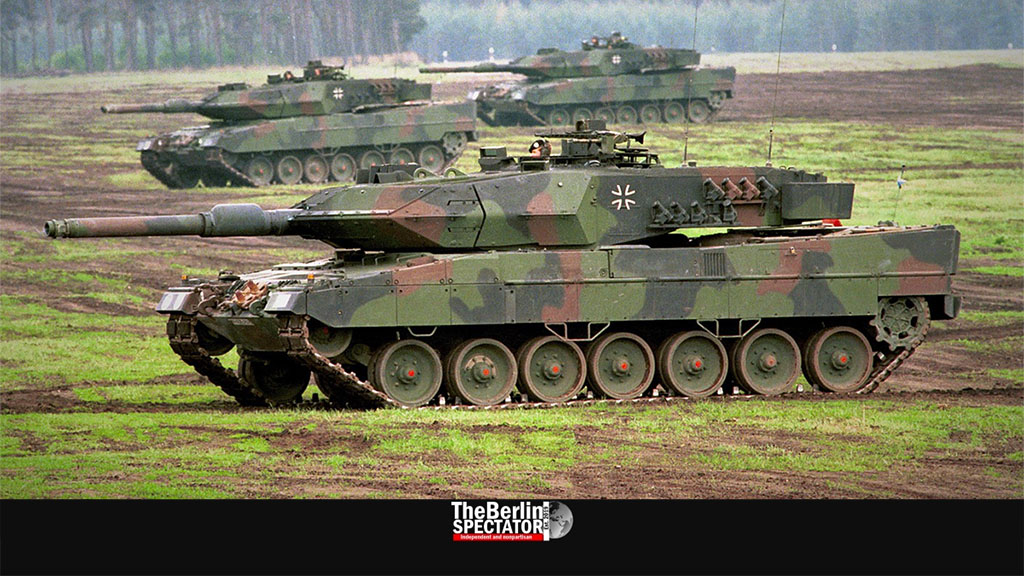 In Berlin, several prominent politicians want the government to deliver more weapons to Ukraine. Some even insist on sending German-made Leopard 2 battle tanks to help the Ukrainian army chase away the Russian aggressors. But this approach could be risky.

Berlin, September 12th, 2022 (The Berlin Spectator) — Marie-Agnes Strack-Zimmermann of Germany’s Free Democratic Party (FDP) is the chairlady of the Berlin Bundestag’s defense committee. Months ago, she kept on calling for the delivery of heavy weapons to Ukraine even though the government was already working on it. Now, she wants the Federal Republic to send German-made tanks, including the Leopard 2. Several German-language publicatrions quoted her as saying Germany needed to contribute to the success of Ukraine’s ongoing offensive against Russia.

While all sane politicians in Berlin want Ukraine to win the war, and to do so as quickly as possible, there is an issue with this demand. So far, no Western country has sent Western-made battle tanks. And, at least for now, it does not seem to be happening, possibly because this approach would increase the danger of being pulled into the war directly. Using Ukraine’s momentum and delivering any weapons system quickly does not seem to be feasible either, also because Ukrainian soldiers need to be trained on them first. As the past months have shown, this takes time.

Lars Klingbeil, the chairman of Chancellor Olaf Scholz’ Social Democrats (SPD) commented on the demands on ARD television on Sunday. In the ‘Sommerinterview’, he did not rule out a delivery of additional weapons. Klingbeil did welcome Ukraine’s recapture of areas formerly held by the Russian invaders and said the weapons Germany had sent had contributed to the advances, and there would be more. At the same time, he stated the western alliance needed to assess the situation. Germany would not do anything without agreements with its partners.

Klingbeil’s and Scholz’ party colleague Michael Roth told the Funke Mediengruppe newspaper publisher, in this new phase of the war, Ukraine needed weapons that put it into a position of being able to liberate more areas from the Russians and control them permanently. He said the West, including the United States of America, Germany and France, needed to adjust their weapons deliveries to the new situation. According to Roth, Ukraine can win the war.

For the conservative opposition party CDU, its foreign policy expert Roderich Kiesewetter said in an interview with the same publishing house, in order to make sure Ukraine’s offensive would be successful on the long run, the country needed all military support it could get. He called for a delivery of armored personnel carriers and German-made tanks. Kiesewetter called on Scholz to go ahead and send Western-made ones.

This past weekend, Germany’s Foreign Minister Annalena Baerbock visited Kiev (Kyiv). Her Ukrainian counterpart Dmytro Kuleba made clear more heavy weapons were needed. While Berlin politiciuans were thinking and being advised, people were dying because those tanks were not being delivered, Kuleba stated. Mrs. Baerbock did promise him more support, but did not go into details.

Photo at top of page by Bundeswehr-Photos (see license)