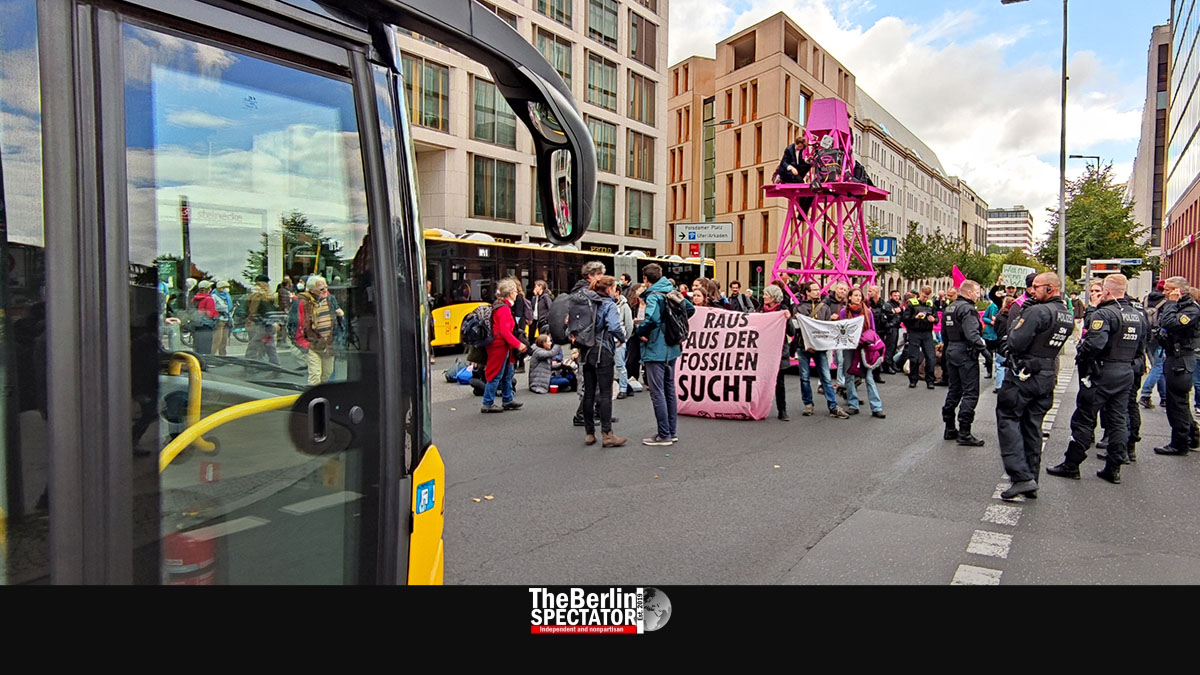 In the center of Berlin, dozens of activists who belong to the environmentalist group Extinction Rebellion blocked the intersection of Friedrichstrasse and Unter den Linden Boulevard. Shortly after, they went to Potsdamer Platz, a major square. The police were busy.

Berlin, September 19th, 2022 (The Berlin Spectator) — For the second time within two days, Extinction Rebellion (XR) staged protests by blocking intersections on Monday. From a camp the environmentalist group set up with tents close to Berlin’s Central Station, everyone was sent towards the government quarter. At about 10:00 a.m. they announced they had blocked Unter den Linden boulevard at the corner of Friedrichstrasse.

It did not take the police too long to get there as well, probably because they are following XR’s Telegram channel. About forty activists who were part of the protest were told to vacate the intersection twice, through loudspeakers mounted on a police van. Otherwise they would be pushed or carried away. While most protesters did leave the intersection after a while, six activists could not go because they had glued themselves to the asphalt. XR is resorting to these tactics now, just like the group Last Generation.

By now, the Berlin Police Department is experienced with this kind of approach. Some officers appeared with paint brushes and salad oil. Using those items, It took them some 20 minutes to detach people’s those glued hands from the street. Afterwards, the demonstrators were photographed by officers and their personal data were saved. They might be fined for coercion.

At Unter den Linden, the intersection was about to be cleared, when the next activity was announced by XR. This time, about 40 persons blocked the intersection of Potsdamer Platz and Stresemannstrasse. In this case, they set up a wooden construction with loudspeakers. Some group members climbed to the top. When it happened, a yellow BVG bus could not pass. Cops sent it through Stresemannstrasse and rerouted the rest of the traffic.

The activists included people aged from about 20 to 75. A younger protester told The Berlin Spectator, Extinction Rebellion needed to block the traffic to make people aware of the climate crisis and the necessity to do more against it right now. Annoying residents by blocking Berlin’s traffic was a risk they needed to take. Asked why they did not just vote for political parties with compatible goals he said democracy did not work here. Action was required.

For a few years, XR and other groups have blocked intersections and other spots in Berlin on a regular basis. Three years ago, hundreds were part of a blockade at Postdamer Platz and around the Victory Column. Today, the number of participants was rather modest in comparison. In the early afternoon XR demanded a “system change” on its channel and thanked everyone involved. After 1:00 p.m. CEDT, the police were still busy carrying protesters off the street at Potsdamer Platz. Earlier, heavy rain had made things uncomfortable for everyone.