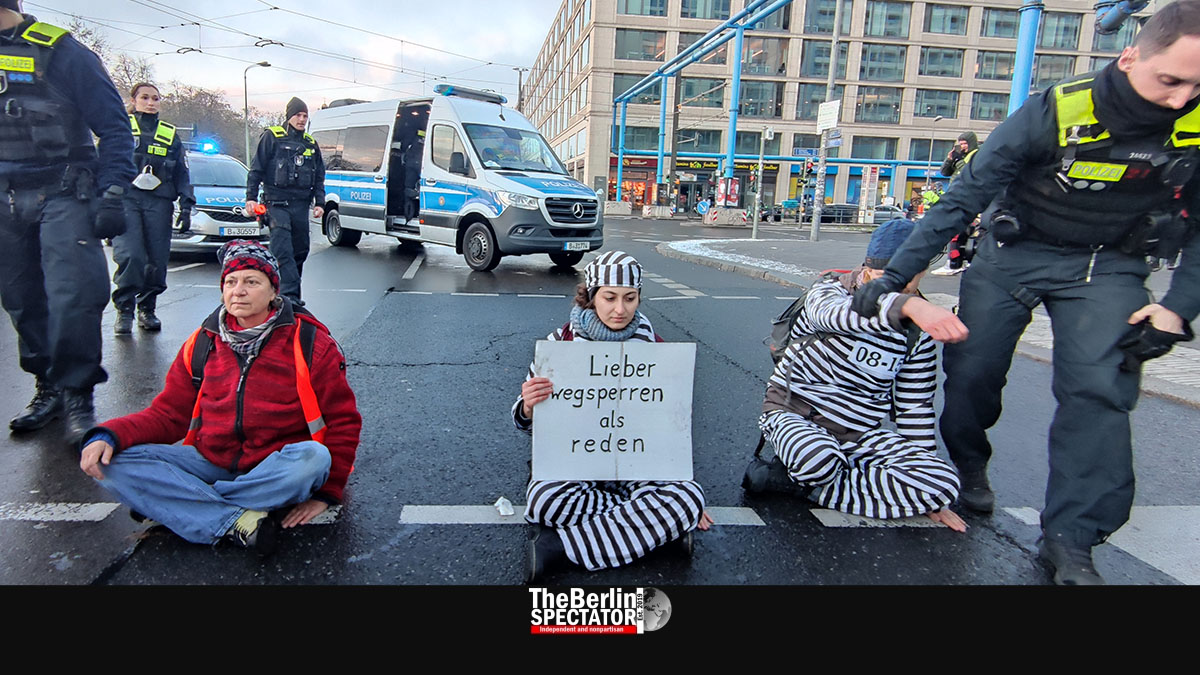 Five of the six activists who blocked BER Airport on Thursday are now free again while one person remains in custody. An investigation into the case is ongoing. Chancellor Olaf Scholz reacted to the radical protest.

Berlin, November 26th, 2022 (The Berlin Spectator) — Brandenburg’s State Office of Criminal Investigations is looking into the last radical protest staged by the radical group ‘Last Generation’. On Thursday, six members cut through barbed wire fences, entered BER Airport’s high security zone and walked around on the taxiways that are reserved for aircraft. Some 16 minutes later, the Federal Police showed up and arrested the protesters some of whom had glued themselves to the tarmac.

Five of the six protesters were released from custody on Friday. A judge decided to keep the sixth person locked up. All of them are now facing a long list of charges, including intrusion into the air traffic, criminal property damage and trespassing. Because of their actions, fifteen incoming flights had to be rerouted and five could not take off, meaning this case could become rather expensive for the accused.

Politicians criticized ‘Last Generation’, including Germany’s Chancellor Olaf Scholz. He told the German-language ‘Focus’ weekly the protest in Brandenburg had been “misguided”. According to a spokesman at the Ministry of the Interior in Berlin, all kinds of protest are legitimate. But the constitution did not protect protesters who committed crimes, he stated.

Berlin’s Senator of the Interior, Iris Spranger, said by blocking BER Airport, ‘Last Generation’ had made a “clear statement”. The group was approving a threat to others. Now, all legal means needed to be used to fight these kinds of crimes. For the conservative Bavarian party CSU, the MP Andrea Lindholz said the activists had “crossed a red line”. Only representatives of the far-left ‘Die Linke’ defended ‘Last Generation’.

The group itself said there would be “free rides and flights” in Berlin and Munich next week, meaning there would not be protests. ‘Last Generation’ would use the time to gather even more people, prepare them and return soon, for the next round of protests. In a recent statement, the radical organization had announced action at airports. The authorities seem to have missed or ignored it, since they did not the intrusion from happening..

Center of the Attention

In the past months, ‘Last Generation’ blocked intersections and Autobahn exists in Berlin and Munich all the time and caused big traffic jams. Some of its members entered ministries in Berlin and museums in Potsdam, Berlin and elsewhere, where they glued themselves to exhibits and threw mashed potatoes at an expensive painting.

By the way: This publication has a newsletter. You can subscribe here.

The group`s official demands change from time to time. First, it was about saving food from supermarkets before it gets thrown away. Now, it is about a general speed limit in Germany and a prolongation of the 9 Euro Ticket, an offer that expired on August 31st, 2022. Critics believe the protests are not really about having demands fulfilled, but about being in the center of the attention. The protesters reached this goal.