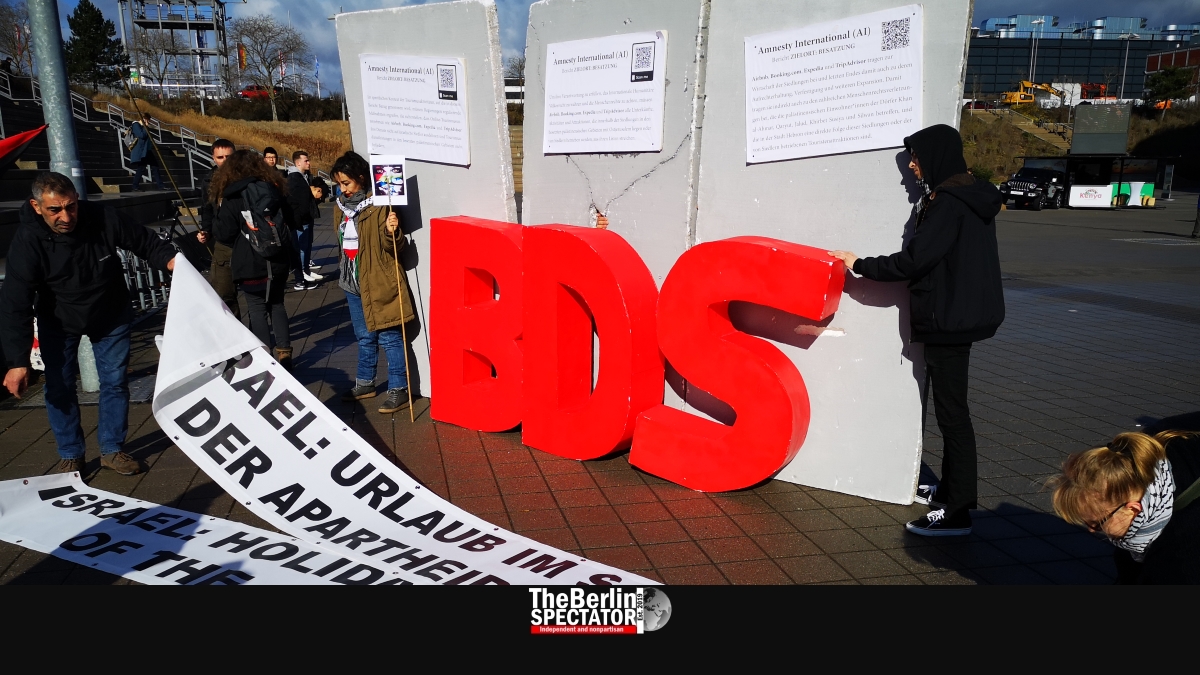 Four parties in the German Bundestag intend to approve an inter-party motion condemning the so-called Boycott, Divestment and Sanctions movement (BDS), which has been trying to damage the State of Israel since 2005.

The German-language ‘taz’ daily reported, Chancellor Angela Merkel’s party, which is the conservative CDU, the center-left SPD, the Greens and the liberal FDP had come to an understanding on the content of the motion. According to the publication, the document will say that the BDS movement’s pattern of argument and methods are antisemitic.

BDS wants to boycott Israel economically, politically, culturally and academically. Some famous artists, such as Roger Waters, are active members of the movement, which never criticizes terror or missile attacks against Israel, but always the reaction of the predominantly Jewish state. BDS does not say anything about actual cases of murder and oppression in the Middle East, such as in Syria, either.

In the motion it says, facilities should not be provided to organizations known for antisemitic statements or which question Israel’s right to exist, according to the ‘taz’. The government is being asked not to support any events organized by BDS or groups with the same goals. Also Germany’s sixteen federal states and all municipalities are being prompted to follow the example.

In parts of the German (and European) left, criticizing Israel and denying the state’s right to exist directly or indirectly has become the new way of rejecting Jews, and treating them, along with their only state, different from everyone else. The latter is the definition of antisemitism. Boycotting Jews, one of the main BDS goals, is not new. The Nazis did so before and during the Holocaust.

That is why the motion reads BDS’ appeals to boycott Israeli goods “remind us of the most terrible phase in German history.”

One of the initiators of the motion, Frank Müller-Rosentritt of the FDP, told the ‘taz’ is felt good to be able to work on an issue as important as this one on an inter-party basis.

Earlier this year, he and a party colleague had brought in a motion which called for a change of Germany’s voting behavior at the United Nations, after the country had voted for U.N. resolutions against Israel forwarded by Arabic states 16 out of 21 times in 2018. That motion was rejected by the Berlin Bundestag.

‘The Left’, another party present in the Bundestag, was not part of the latest motion because the CDU rejected any cooperation with them, the ‘taz’ reported. This also applied to the radical right-wing ‘AfD’. Last week, the latter had forwarded its own motion, which called for banning the BDS movement altogether.

Since ‘AfD’ MPs have called for more support for Israel on at least one occasion, the approach towards this party is being discussed inside the small Jewish community in Germany. While some members seem to be supporting the party, most firmly reject it.

High-ranking ‘AfD’ members have been rallying against migrants with Nazis. Others have tried to downplay the significance of part of Germany’s history, namely the Third Reich and the Holocaust.

One of the radical party’s leaders, Alexander Gauland, has said Germans should be allowed to be proud of the “accomplishments of German soldiers in both world wars”. In WWII, Nazi Germany murdered six million Jews and tens of thousands of members of several other minorities.

Cross-party motions, such as the one which is about to be forwarded, are rare in the Berlin Bundestag.

In the meantime, Israel is fighting BDS in several ways, including on the Internet. ‘Menawatch’ reported, the country had just launched a website which appears to be pro-BDS, at first glance. Under the title “Beautiful, Diverse, Sensational”, that page presents “the true BDS story”.