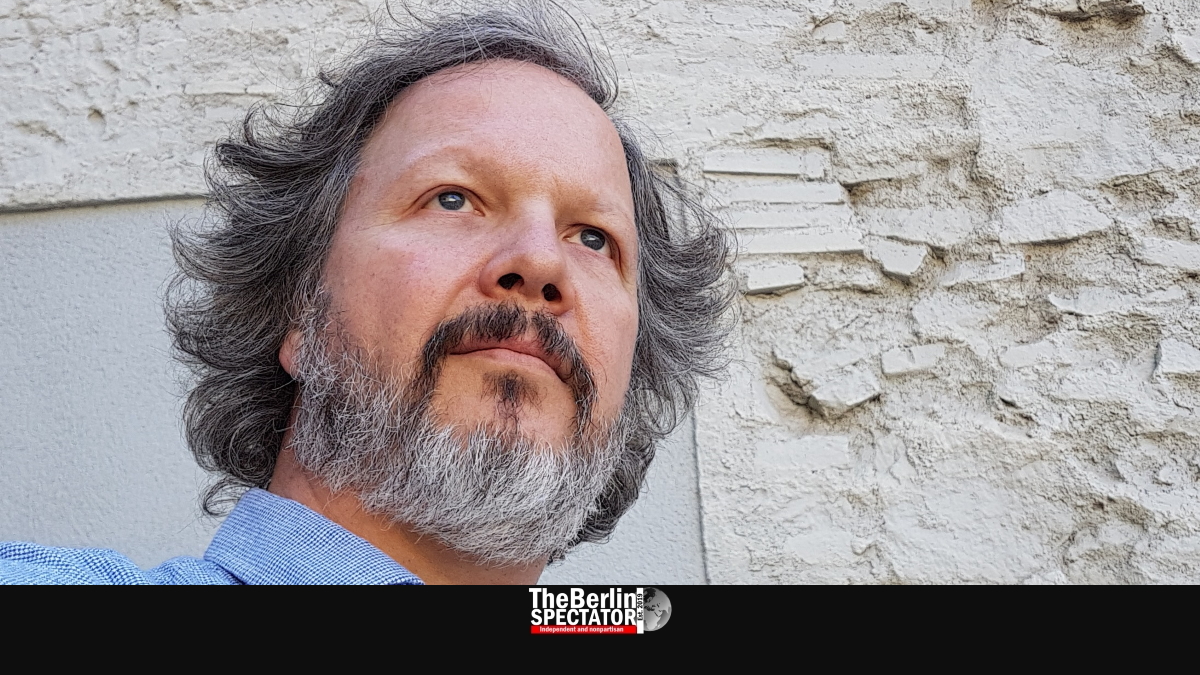 Professor Narcís Parés is an information technology expert at the University Pompeu Fabra in Barcelona. The personal research he did on the effects of 5G wireless technology lead him to the conclusion that “people should worry.”

Politicians in Germany keep on talking about 5G, the latest generation cellular network technology which is supposed to make exchanging data lighting fast and create “a whole new experience”. The country already sold the right to set up the planned 5G network to the highest bidders.

Other European countries have gotten farther than that. In Ireland, Cork, Dublin, Galway, Limerick and Waterford are already on 5G. The same applies to eight cities in England, including London. The city state of Monaco is on 5G. So is Romania. Many more countries are working on 5G networks.

This new technology uses millimeter waves which are much smaller than conventional ones used up to now. The so-called MIMO technology is part of it too. This means each data cell will be transmitted through several small antennae in the receiving device. Multiple bitstreams will be transmitted simultaneously and far more data will be flying through the air, so to speak.

In Barcelona, Professor Narcís Parés started doing personal research on 5G and the effects it has on humans when it turned out his partner suffers from something called electrosensitivity, a condition the effects of which become a lot stronger with 5G networks.

No Mention of Health Issues

But that is only part of the problem. “I have learnt EMF actually affects all of us, even when we do not feel any symptoms”, Professor Parés tells The Berlin Spectator. That abbreviation EMF stands for electromagnetic field, an electrical action produced by a non-electrical force.

“Over here in Spain the relevant ministry has passed a law to liberate the frequencies and bandwidth”, Parés says. “However, since there has been no mention to health issues in this process, a number of institutions recently handed in complaints to the ministry, which completely ignored them.” Several countries have taken similar approaches.

“Because of complaints, the Spanish ombudsperson produced an official answer stating that indeed the national plan has not taken into account potential environmental issues caused by EMF”, Parés explains. The ombudsperson finally came to the conclusion “that it is advisable to follow the Recommendation 1815 passed by the European Council.”

The document basically says “that all emissions should be reduced as much as possible on children and safety distances should be used when installing antennae.” But, according to Narcís Parés, “Barcelona has risen as one of the cities in Europe which act act as spearheads of 5G. This technology is being sold to the citizens as the most important economic progress for Catalonia in the next years, without even mentioning potential adverse issues.”

“Already, 5G antennae have been placed in some streets without any consultation. The Catalan Government and the Barcelona City Council, which by the way recognizes electrosensitivity, expect to attract companies to use them for their pilot tests. Hence, the inhabitants are de facto becoming lab rats.”

Professor Parés is disappointed, also because “this contravenes one of the major ethical tenets of scientific research, which is informed consent. All this while all cell phone towers on rooftops over here are being covered with huge white boxes that make them less visible and pass unnoticed.”

As Parés explains, there are already hundreds of studies showing a large number of negative effects. “According to these studies, these waves affect our body at a cellular level, changing the electro-chemical control systems that they use to regulate themselves. This is the case, for example, with voltage-gated calcium channels, which are fundamental for the functioning of muscles, neurons, hormones and DNA.”

“Another example is the disruption of the blood-brain barrier, which protects our brain from potentially harmful elements in the blood. As a result, people suffer from muscular pain, sleeping trouble, neurological disorders, thyroid disease, reduced fertility or cancer. There also seem to be clear links between Alzheimer’s or autism and EMF. And we are only talking about human beings.”

According to Professor Narcís Parés, other studies have shown an impact on the environment, “which the 5G technology is going to increase because it is already being deployed at a planetary level via satellites. Its millimeter waves cover the bodies of insects completely. In this sense, bees are already seen to be affected as much as by pesticides.”

‘Residents Have Reason to Worry’

By the year 2022, Germany intends to have 98 percent of all households covered by the new 5G network. This kind of dissemination speed is part of the contract with the telecommunications giants who are setting it up. T-Mobile and Vodafone are already using 5G in some areas. Professor Parés says he believes residents have reason to worry.

“All EMF seem to have clear effects on our health and wellbeing, but 5G will be much closer and directed towards us since it works by massively generating oriented beams of waves, the so-called ‘beam forming'”, he states. “This is why in many towns and cities in the United States of America the trees on the sidewalks are being cut. They get in the way of the directed beaming and would block part of the communication potential.”

One of the main issues with EMF was the accumulation of exposure, Parés explains. This was one of the reasons why so many paid studies which appear to have been paid by lobbies, show no effects. “It is because they do not test continued or long-term exposure, and only focus on instantaneous effects.”

Parés says some argued that, since there was no warming effect as there is in microwave ovens, people did not have to worry. “But actually, the 5G bandwidth does generate warming at high intensities. This is a well-known effect used by the military and police forces. They project these waves onto groups of people that need to be dispersed.”

“We are increasingly being exposed to these EMF technologies and all of them, including 3G, 4G and WiFi affect us. But 5G signifies a leap forward in exposure and intensity. Unfortunately, we are going to see a huge increase in health issues when it will be too late to stop this technology trend.”

“One apparent proof of this is that some German companies are providing rooms that are completely shielded from EMF, so called ‘white rooms’, to allow their workers to stay in them for a while and partially eliminate the effect of EMF exposure. In France it is now forbidden to have any WiFi or EMF exposure on kindergartens and primary schools. Cities such as Brussels are hitting the breaks on 5G because of the increasing evidence that it can be harmful for our health.”

Nacís Parés’ partner, who was a colleague researcher at his university in Barcelona until she had to go on sickness leave seven months ago, developed many different symptoms. Those included headaches, foggy brain, stomach aches, chronic fatigue, tinnitus, memory deficiencies, tingling sensation on her arms and legs, sleeping disorders and muscle stiffness.

“She undertook clinical tests that have shown results widely correlated with microwave sickness by renowned experts: magnesium, melatonin, iron, and vitamin D deficiency, high IgG antibodies, and now she has developed lactose intolerance. She started to notice that she felt bad whenever she was close to WiFi routers. She noticed that in her office at the university and when she left the building she started to feel better.”

Then she taught at a high school where all spaces were equipped with wireless technology. Professor Parés: “Her symptoms worsened and she started to feel sick also at home or in proximity to cell phone towers. As a result, she cannot use public transportation in Barcelona, as they all have full 4G coverage and WiFi. She can’t walk freely in urban areas or even the countryside, for fear to go near a cell phone mast, and has had to shield our house walls and appliances against high- and low-frequency EMFs with special graphite paint.”

‘Engulfed by the 5G Craze’

“She wants to have a normal life, so she has bought special sleeping bags and shielding clothes made with silver thread. Unfortunately, they do not fully protect her and so, in spite of all the money spent, she has to spend most of her time at home and is never completely well.”

Narcís Parés came to the conclusion that “we are indeed going to be engulfed by this 5G craze which sadly is not even as necessary as they say. By this I mean that many of the applications that are being sold as really novel, thanks to 5G, can be achieved by using fibre optic cable connections. There is no real need for wireless, and wired systems have less latency. 5G is being pushed by companies which work on self-driving cars, mobile phone enterprises, data traders and content providers that only want to make profit and disguise it as progress.”

“However, we also feel that many people willingly participate in this situation. In this sense, we have noticed that when people are told about the negative effects of EMF they become aggressive on imagining the possibility of having to stop using their smartphones. We all have become addicted to wireless technology, as we did before with tobacco.”

Tenure Associate Professor Narcís Parés is part of the Information and Communications Technology Department of the University Pompeu Fabra in Barcelona. He leads the Full-Body Interaction Lab within the Cognitive Media Technologies Group.

There is recommended reference on cable technology, on the effects of 5G on people’s health and on public institutions taking action. This interesting website also concentrates on 5G and health.