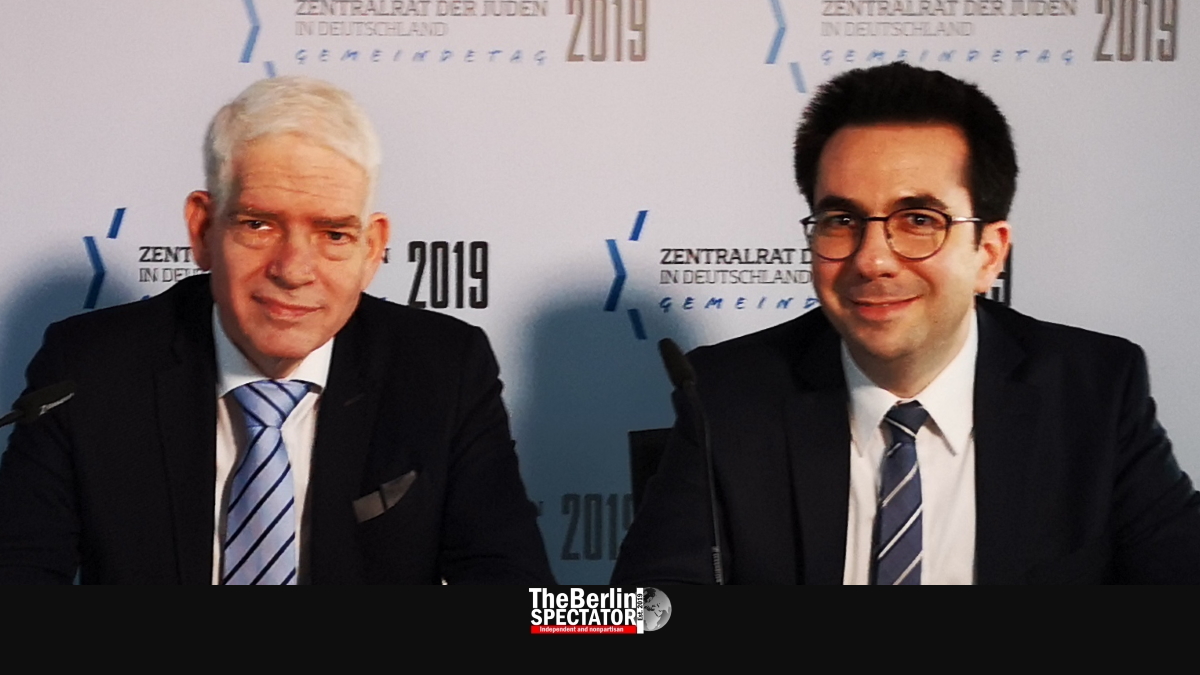 In Berlin, some 1000 members of Jewish congregations from all over Germany came together for the annual Jewish Community Day on Thursday. Political discussions were the focus on the first day of the event.

Josef Schuster, the President of the Central Council of German Jews, and the organization’s chief executive Daniel Botmann (see main photo above) opened the Community Day. Members from 105 congregations came to Berlin’s posh Hotel Intercontinental to discuss politics and other subjects. Apart from cultural events, including readings and concerts, a Shabbat prayer on Friday night is part of the program too.

On top of it all, Schuster will sign a treaty with Minister of Defense Annegret Kramp-Karrenbauer about the employment of Jewish military chaplains. For the first time in the history of the ‘Bundeswehr’, Germany’s armed forced, rabbis will be on duty alongside pastors and priests from the two main Christian denominations, namely the Catholic and the Lutheran one.

Germany’s President Frank Walter Steinmeier visited the Jewish Community Day on Thursday. He spoke to twelve young community members who were going to tell him about Jewish life in Germany and their experience with antisemitism in the country.

The rise of this centuries-old, sick hatred towards Jews was the subject of a discussion panel as well. During similar events, Zionism, issues within the German judiciary, Judaism at schools and the development of the German Jewish community since 1945 were discussed. The overall motto of the Community Day is “At Home in Germany”.

During yet another panel discussion which included Joseph Schuster, the British-German author Alan Posner and the historian and museologist Professor Christoph Stölzl, the situation at Berlin’s Jewish Museum and its future were the focus. Last summer, the institution had been part of a big controversy.

The museum’s leadership had given too much room to those who want to boycott, attack and get rid of Israel, the only predominantly Jewish state in the world. Peter Schäfer, the former director, had to leave. His successor, Hetty Berg from the Netherlands, will take over in early April. All panel discussion participants on the podium were optimistic.

Especially nowadays, antisemitism is a subject that needs to be discussed at Jewish events like the one which commenced today. Schuster said the recent right-wing extremist terror attack on the Synagogue of Halle, during which two passers-by were murdered by a Nazi, had lead to insecurity in the Jewish community.

At the same time, Joseph Schuster conveyed a clear message to the many antisemites in Germany. He said the Jewish community could not be expelled by the use of bombs or other weapons. They felt at home in Germany and would stay.

According to Schuster, the Halle attack has actually lead to positive changes in Germany, where the government and authorities have since increased their efforts to fight antisemitism. The latter mainly comes from the extreme right, the extreme left and from within the large Muslim community in Germany.

On Friday, before Shabbat, religious freedom, the fight against the antisemitic BDS movement, social media, the refugee crisis and other subjects will be discussed. Additional panel discussions are to deal with antisemitism at German schools, the picture German media paint of Israel and the question whether all Germans Jews, including the members of orthodox, conservative and reformist congregations, as well as atheists in the community, are or can be united.

Security was tight around the Jewish Community Day in Berlin. Dozens of police officers protected the event and its participants. Pedestrians in the area were not allowed to walk on the sidewalk next to Hotel Intercontinental, some passers-by were checked.

While President Steinmeier was at the event, Berlin’s Governing Mayor Michael Müller took part in a commemoration event for the twelve victims of a 2016 Islamist terror attack at a Christmas market located half a mile down the street. This combination was a ‘security nightmare’ from the perspective of those responsible. Traffic was stopped on ‘Budapester Strasse’ for a while, including bus line no. 200.