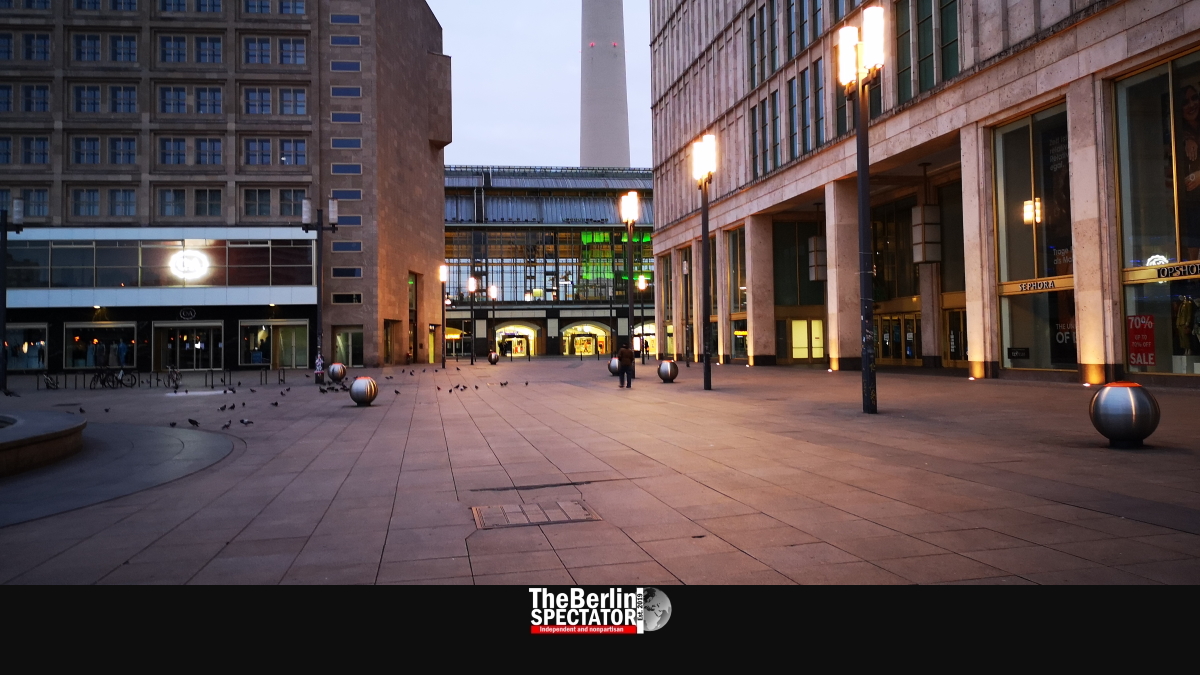 Once upon a time, Berlin was a vibrant city, a business metropolis, a startup haven and a tourist magnet. At this stage, 66 days after the first Corona case was reported in Germany, not much of all of that is left.

Alexanderplatz, a place hundreds of thousands of Berliners and tourists usually hit every day, seems more like a Hollywood film set during a shooting break. Lots of lights everywhere, but nobody needs them. In normal times, villages have more pedestrians than this central square does now.

Karl Liebknecht Strasse looks a bit “better”. At 6:17 a.m., quite a few cars are moving from A to B. Who are the drivers? Nurses who just ended their night shift? Police officers who are about to start their day shift? Supermarket cashiers? Who else would move around at 6:00 a.m. in the Corona crisis?

Around Brandenburg Gate, guards in front of the British, American and French embassies are hanging in there in the cold at 6:40 a.m.. Every few minutes, a bicyclists races by. Other than that: Nothing, nada, nichts, niente, rien. One day, in 40 years from now, people might look at these Corona photos, wondering what these times must have felt like.

On Strasse des 17. Juni, hardly any vehicles appear. Of course there are advantages to this kind of traffic. The pollution decreases. So does the number of accidents. But this does not really feel like Berlin. Nobody honks. The noise is gone. Life is here, but hidden.

At the Reichstag, one police guard can be seen through the window of a container in which they usually organize the invasion of visitors who want to enter the historic building’s dome. One thing is certain: The Reichstag, and the entire city, have seen times that were far worse than Corona. Still, the spread of the virus is serious, in Berlin, in Germany, in Europe, in the world.

At least one person is busy at the Chancellery: Angela Merkel, its main resident, is governing the country from her living area on the sixth floor, where she has been in quarantine, just in case, since March 22nd, 2020. She will have to hang in there another three days.

Berlin’s Central Station, built for tens of thousands of passengers per day, is not quite as pretty as a little flower that is ringing in spring on a lawn located on the other side of the Spree river. If the flower knew what kind of spring Berlin will be having, it would probably hide.

As many as two passengers are heading towards the southern exit of Central Station. They might be commuters who came in from Brandenburg province, or Berliners who work at the Charité hospital nearby. They must have felt pretty lonely in this huge station.

Friedrichstrasse was one of the two most important shopping streets in Berlin. Well, not anymore. At 7:42 a.m., hardly anyone was going to work here. No boutiques, no culture, no restaurants, no offices are open. There is just a lot of nothing.

A bit further south-east, in Berlin’s Kreuzberg borough, there actually was some traffic at around 8:00 a.m.. Hey! What about our orders? The ‘contact ban’ and all of that. Well, Berliners who are on the move this early probably have very good reasons.

A city named Berlin has gone through a lot in the past eight decades, including fascism, communism and its partition, for 28 years. Now it is Corona. And it will not last quite as long.