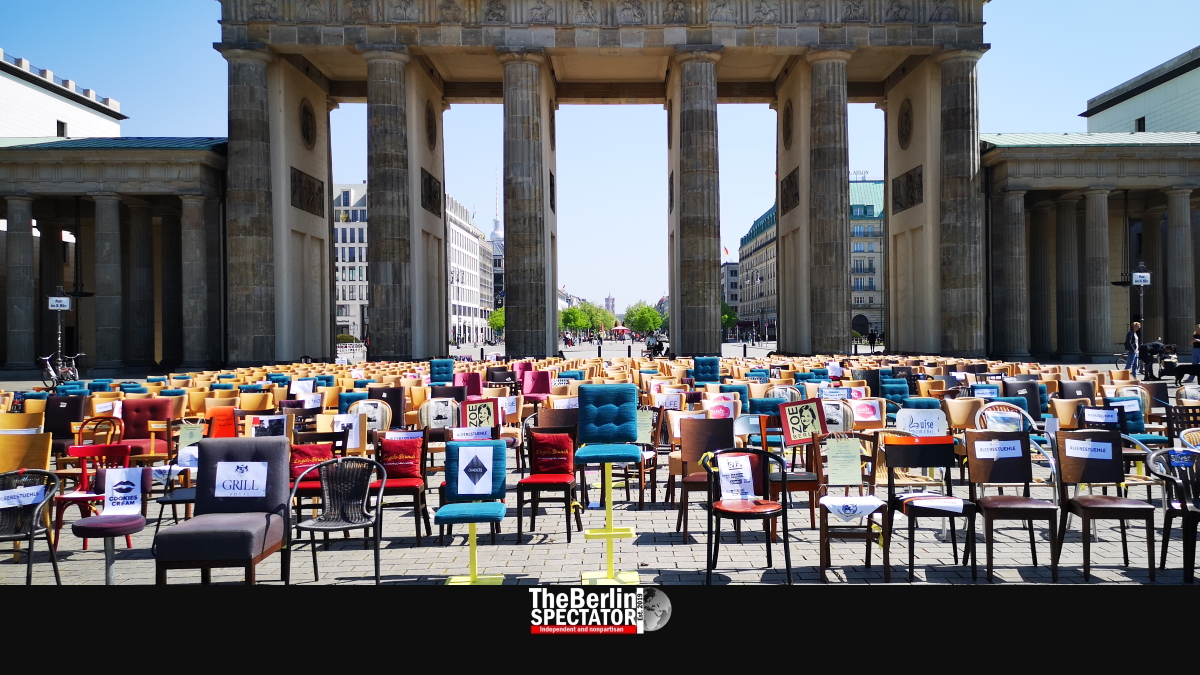 On the 88th day after the first Coronavirus case was confirmed in Germany, a month into the contact restrictions, and on the first Friday with open shops since March, some surreal scenes could be witnessed in Berlin.

There was not too much going on in one of Berlin’s finest malls. Located close to Potsdamer Platz, Mall of Berlin, a rather posh place that would have been crammed in a normal world, was almost empty. Hardly anyone was seen in the early afternoon. Nobody wanted high quality shirts, pants, dresses or anything.

But things did look different in a less expensive mall, namely the Neukölln Arcaden. Here, security staffers controlled the number of people who were going in, by counting those who were coming out. When two people left, two more were allowed to enter. They visited Kaufland, a huge supermarket, went to buy consumer electronics or to visit the post office.

Because of the distance rules, post office employees used adhesive tape to mark a long line of little boxes people could stand in. Those who did automatically kept their distance to everyone else. The whole thing looked like a giant board game. Only the dice were missing. Getting into the post office or the consumer electronics store took about half an hour.

Exactly 8 kilometers (5 miles) west, at Berlin’s giant Tiergarten park, it was the opposite picture. This particular park is so huge, distance was not an issue at all. At about 2 p.m., couples and families were sitting in the shade provided by big trees and enjoying life. Even the bees that were invading the cherry blossoms kept their distance to each other.

A bit further north, a vending machine at the Turmstrasse U-Bahn station (underground, tube, subway, metro) caught the interest of passengers because it offered exactly what people want these days: Protective masks made out of cloth. The most inexpensive ones are 5.50 Euro (5.94 Dollars or 4.81 Pounds) and look like they are usable, maybe with a paper towel inside. That way the masks will not be wet within minutes.

While there was little traffic in Berlin’s western city center, there was a lot in the artsy-fartsy Kreuzberg district. On Mehringdamm, a major street that connects Platz der Luftbrücke (‘Airlift Square’) to the Spree river, an actual traffic jam surprised people. Somehow it seemed completely out of place. Those who were stuck in it probably felt they were back in a pre-Corona world, at least for a little while.

The most surreal scene could be seen at Brandenburg Gate. Dozens of empty chairs were lined up in front of it. They were part of a protest entitled #LeereStuehle (‘#EmptyChairs’) which was staged by owners of restaurants and pubs. It was their way of saying they want to be back in business. Yesterday.