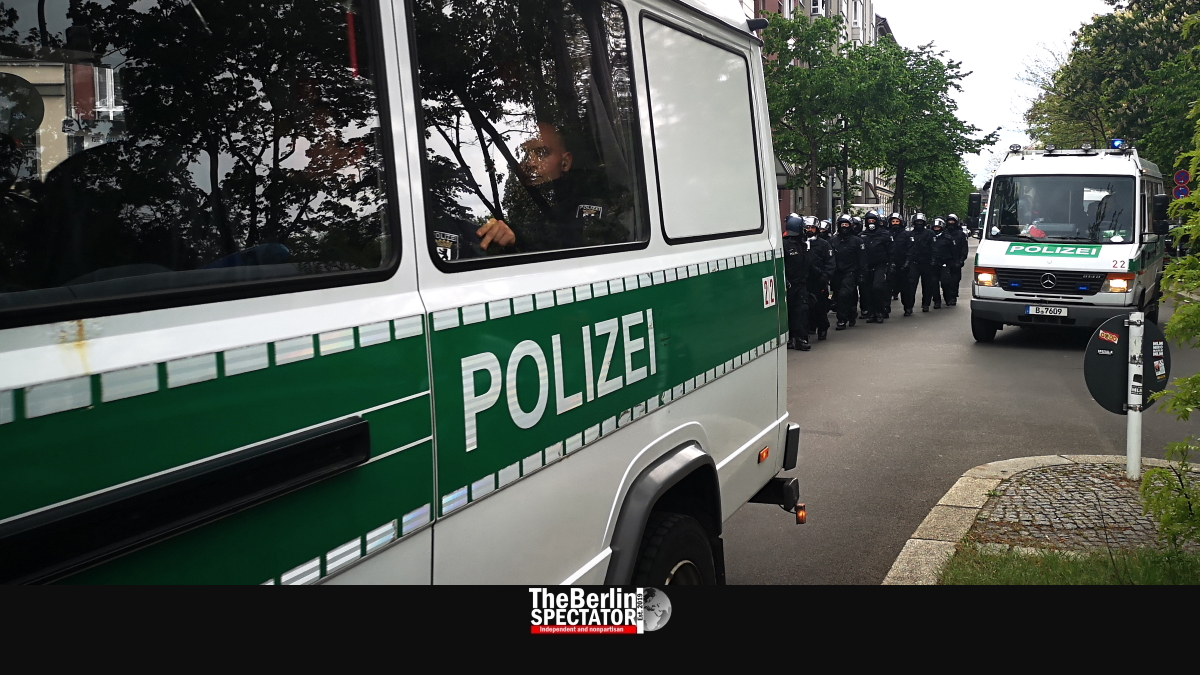 In Berlin, thousands of extremist left-wingers and conspiracy theorists demonstrated against the state, the “system”, the police and the Corona restrictions on Friday. This year’s Labor Day was dominated by the Coronavirus, but hardly anyone seemed to care.

At a protest staged by conspiracy theorists at Rosa Luxemburg Square in Berlin, a TV team was attacked on Friday. Five people were injured, two of them seriously. Police officers arrested six suspects. This incident happened even before the ‘Revolutionary May 1st’ group tried to get many people together for another illegal demonstration.

Dozens of potential protesters arrived at Oranienplatz and Oranienstrasse in Berlin’s Kreuzberg district in the early evening, after they had been prompted to go there by the ‘Revolutionary May 1st’ social media team. But the Berlin Police Department likely followed that channel too. Several access points were blocked by officers. Nobody was allowed to pass.

As they had announced beforehand, protesters moved back and forth in order to confuse the police. The strategy worked only partially. At many spots around Kreuzberg, far too many people gathered, considering the “revolutionary” protest was forbidden because of the Coronavirus. When the crowds moved to Kottbusser Damm, an important street in the district, their numbers grew substantially.

Thousands of Cops on Duty

Still, the police on site did not warn them about being too close to each other at first. On RBB TV, Interior Senator Andreas Geisel explained preventing a large protest from taking place had been the main priority.

Five thousand police officers moved around in police vans and by walking in formations. Their colleagues monitored the situation from a helicopter that stood in the air above Kreuzberg for hours. The Federal Police and hundreds of officers from other federal states supported the Berlin Police Department.

Too Many People, Too Close

Later in the evening, a man was arrested for glaring police with a laser pointer. At Mariannenplatz, several individuals were taken into custody. Senator Geisel stated quite a few “experience-oriented people” were on the move in Berlin along with “autonomous” left-wingers. He said it was simply irrational to gather in big numbers during the Corona crisis.

The ‘Revolutionary May 1st’ was not as violent as the group usually is, possibly because police successfully kept gatherings of people apart from another. Also it started raining at some point. But far too many people were far too close to each other several times in the course of the evening. In part, this applied to police as well. Most officers wore masks though.

Police closed Görlitzer Park after thousands of people had gathered there. Wiener Strasse was blocked as well. Several intersections were temporarily closed even to residents who just wanted to go home.

In the course of the day, 80 individuals were arrested at Rosa Luxemburg Square, and 50 in Berlin’s Kreuzberg district. Six of the latter were taken to arraignments. A female police officer was injured. In Friedrichshain, a protest kept police busy in the afternoon.

Earlier on Friday, a total of 27 registered and legal protests had taken place in Berlin. Because of Corona, the maximum number of participants for any rally is 20. Major unions and left-wing parties organized several peaceful demonstrations at a time, in order to get more people to join.

All in all, a few thousand Berliners took part in legal and illegal Labor Day protests. Regarding the protests in Kreuzberg, police said about a thousand people had taken part. But that number seemed low. At Kottbusser Damm alone, some 700 protesters gathered, while many more were still at Oranienstrasse and other locations.