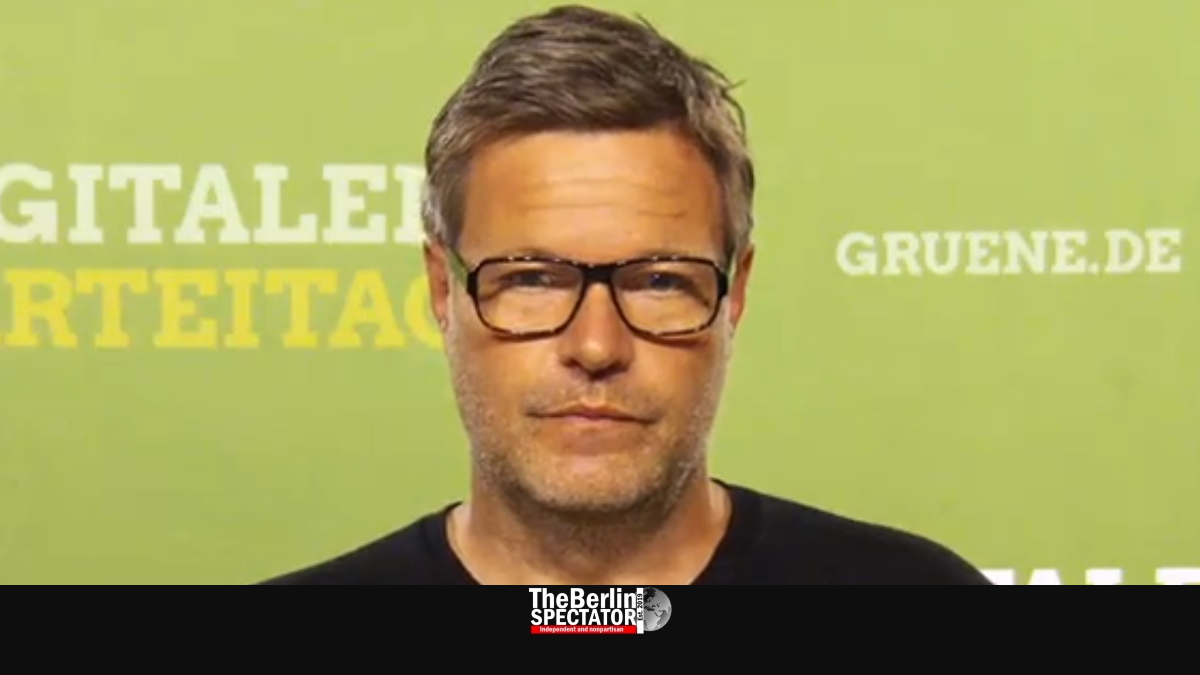 The Greens organized the first purely digital party congress in Germany today, obviously because of the danger posed by Corona. Annalena Baerbock and Robert Habeck, the two party leaders, held their main speeches.

Because of the Coronavirus, these are difficult times for opposition parties. The government takes decisions and explains those on a daily basis while the opposition can either just nod or dissect Chancellor Angela Merkel’s rather successful course. The Greens decided to do the latter, at least to some extent.

Just a few weeks before Corona, the party had celebrated its 40th anniversary. In polls it got more support than it could ever have dreamed of. The Greens were suddenly a lot stronger than their former coalition partner, the Social Democrats (SPD).

In the crisis, that support shrank from far more than 20 to now 16 percent. Because it is the Corona crisis that led to this change, Habeck made clear the slump could only be a snapshot. “That is why I don’t give a damn about those polls”, he said.

The Greens are being seen as a possible coalition partner for Angela Merkel’s conservative Christian-Democratic Union (CDU), for instance if and once the SPD pulls out. But since Corona hit, most Germans do not seem to be interested in questions of this kind, at least for now.

In his online speech, Habeck thanked caretakers, nurses and cashiers at supermarkets, but also young Germans in general. Without the crisis, they could have experienced “the May of their lives”, Habeck said. “The fact that you are going through this is a sign of solidarity and maturity.”

He compared the Chernobyl Disaster to Corona by saying in 1986, when the Ukrainian NPP had blown, he had heard about it in the news. “I did not see, hear or taste anything”, Habeck said, referring to the radioactivity that spread all over Europe after the accident. Back then he had learned that experts usually argued, while politicians needed to take the decisions.

Robert Habeck stated the “capitalist globalization” needed to be overcome and Europe had to act jointly. The Green politician also called for more research. His main demand was hidden as point number 4 on his list: Habeck said the money German companies were getting from the state needed to be linked to a condition: The economy had to become climate-neutral.

The other leader of the German Greens, Annalena Baerbock, said it was important to discuss the question how the country could get through the Corona crisis quickly and take advantage of opportunities it yielded. Also the question whether the Corona restrictions were still proportionate needed to be asked.

There had to be lucid criteria. Annalena Baerbock accused the federal government of not communicating those clearly enough. Social hardships needed to be considered too, as well as economical ramifications of the restrictions. Besides, the state had the duty to look after those who did not have a lobby, she told the delegates.

The Greens are hoping the political landscape will normalize again soon, once the Corona crisis was tackled. Next year, there will be general elections in Germany. One thing became clear again at the Green digital party congress: The party does not want to co-govern or govern in federal states only, but on the federal level too.

Related articles:
Germany: Is it Easy to be Green?
Germany: Greens Celebrate 40th Anniversary in Berlin