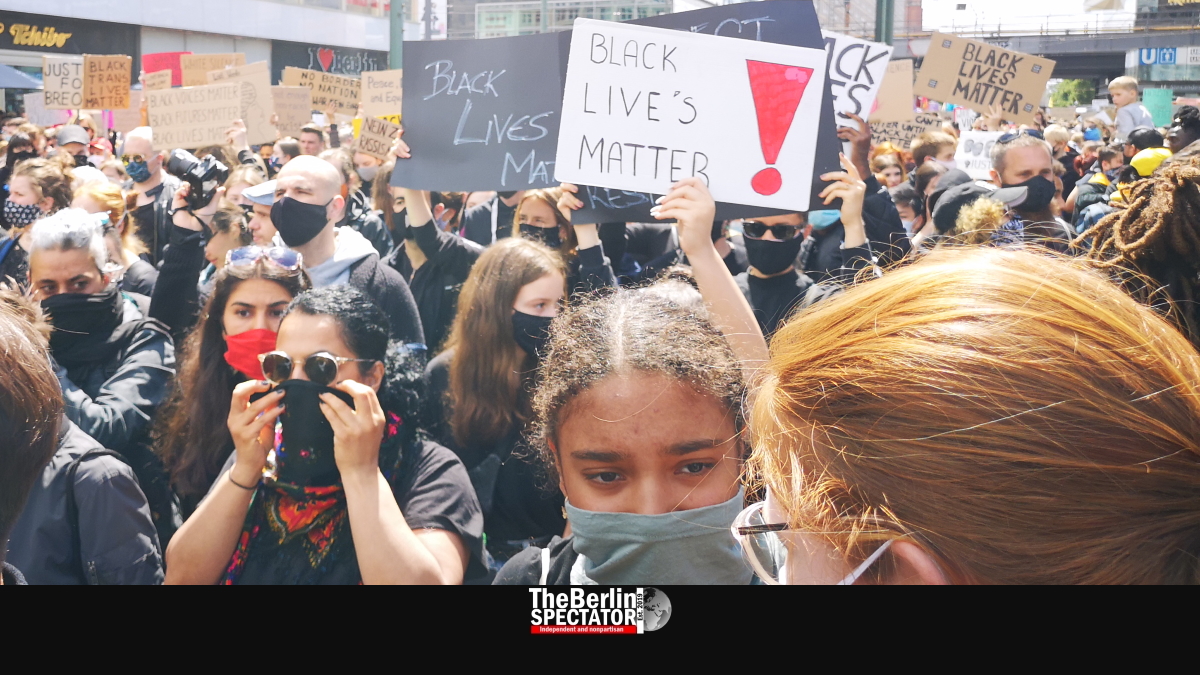 In Berlin, 15,000 people participated in a protest against racism and police brutality in the United States, twelve days after George Floyd was killed by a cop in Minneapolis. Some anarchists abused the rally by attacking the Berlin police with stones and bottles.

Alexanderplatz, a large square in Berlin’s eastern city center, filled up quickly on Saturday afternoon, as thousands of mostly young Berliners arrived for what was supposed to be a quiet protest and commemoration for George Floyd. Most participants wore black t-shirts and held signs saying “Black lives matter”, “I can’t breathe” or “F*ck racism”.

The protest had been registered for 1,500 people, a police spokeslady told The Berlin Spectator. When ten times as many showed up, the organizers were surprised. In fact, there were so many people, not everyone reached the main square. Only a few hundred people who were standing right in front of a van with loudspeakers were able to hear the speeches that were held.

At the beginning, there was only one issue: Hardly anyone adhered to the distance rule, meaning thousands of protesters were far too close to each other, considering the fact that the dangerous Coronavirus is still spreading. Through their own loudspeaker system, police officers asked the protesters to keep 1.5 meters (5 feet) of distance to everyone else. But hardly anyone heard them and nobody did. It was hardly possible to follow that Corona rule in the crowd.

Violence During Protest Against Violence

The thousands of people assembled observed a moment of silence which lasted 8 minutes and 46 seconds, exactly as long as officer Derek Chauvin knelt on George Floyd’s neck in Minneapolis almost two weeks ago, killing him in the process.

Later, another problem arose: Dozens of anarchists abused the rally against police violence by becoming violent and attacking the Berlin Police. They started throwing bottles and stones at officers. A photographer and several officers were injured. A total of 94 individuals were arrested during an operation that involved 800 police.

Once the official rally was over later in the afternoon, hundreds of protesters refused to leave even though police had asked them to do so several times. When they threw bottles at police again, dozens of officers, some with dogs, made sure they did leave.

There were similar commemorations for George Floyd in other German cities on Saturday. All of a sudden, the Coronavirus and the restrictions designed to curb its spread did not seem to be too important to Berlin’s protesters anymore.

But every weekend, thousands of mostly young residents in the German capital find ways to gather in large numbers without keeping their distance. A week ago, it was a giant boat party on the Spree river that was disguised as a protest for the reopening of clubs, according to Governing Mayor Michael Müller. This time it was a big rally.

But most rally participants, the peaceful ones, did bring their message across. The decades-long struggle against racism in the world is not over.