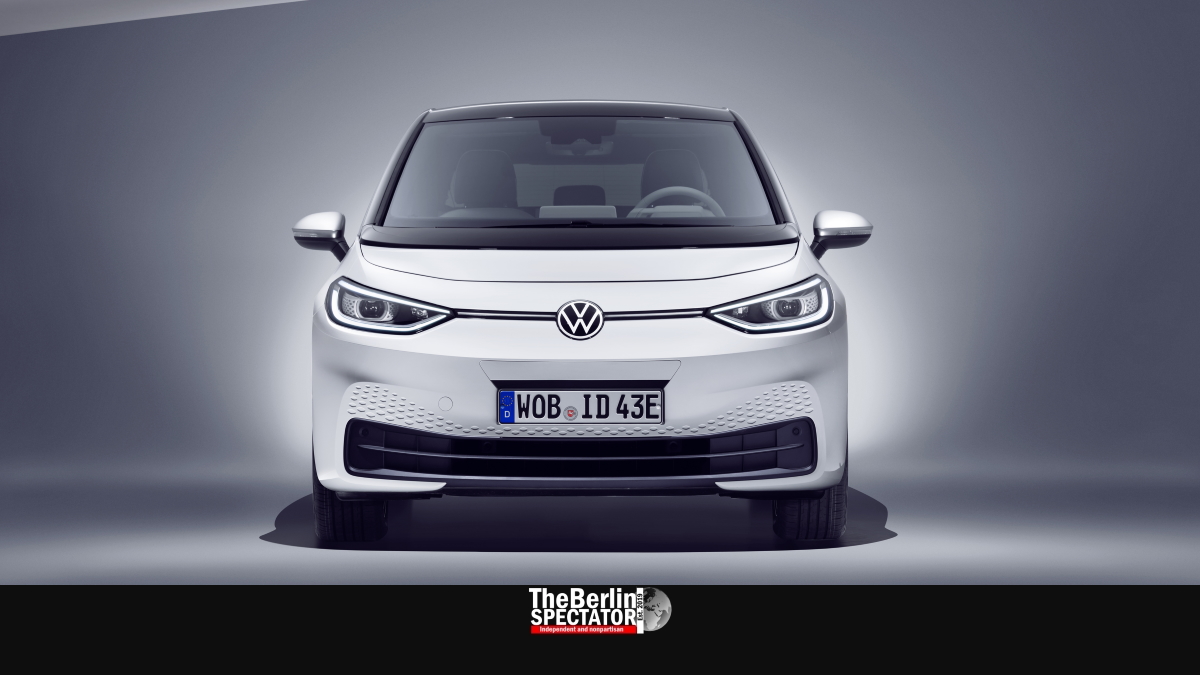 Volkswagen is getting ready to deliver its first purely electric vehicle, the ‘ID.3’, to customers. After all the trouble the company was confronted with, namely the Diesel scandal, the Tesla shock and Corona, the new car has to become a success.

In the beginning, man created a machine that would take him places. Once he was done, the horses would remain in the stable. The problem he still had was that the machine stank like hell. Its pollution became a global issue. But those who manufactured and sold those machines, did not care too much.

When the new millennium dawned, the Germans laughed about a South-African-Canadian engineer in California who actually turned Lotus Elise roadsters into electric cars. What a clown. “Hahaha”. Sixteen years later, that clown, Elon Reeve Musk, had overtaken them, for instance in the field of innovation. And his company, Tesla, was more valuable than several German auto makers combined.

From that moment onward, Tesla was the measure of all things. Matching or overtaking the Americans meant surviving. Lagging behind meant losing it all. That is why the largest auto maker on Earth, Volkswagen, knew it needed a third revolution. The engineers got down to business.

While they started developing a vehicle that would be electric, affordable and an actual alternative to Tesla’s Model 3, their colleagues squeezed a few electric motors into VW Golf bodies. So, they already had the e-Golf, meaning electric mobility was secured, but these vehicles are heavy and their range is only about 200 kilometers (124 miles).

In September of 2019, Volkswagen presented a fine machine at the IAA Auto Show in Frankfurt. On site, a spokesman told The Berlin Spectator, the “third revolution” was almost ready. They called it ‘ID.3’. A futuristic, electric vehicle, developed from scratch for billions of Euro, needed a futuristic name.

The first revolution was the VW Beetle, which was the most sold car in the world until it was overtaken by the VW Golf, the second revolution. The ‘ID.3’ (don’t forget the dot or it won’t be right) is supposed to be the successor. The question is: Will it inspire people the way the first two revolutions did? It has to, for the sake of the company.

To Volkswagen, the ‘ID.3’ is the ace-high flush they put on the table, hoping nobody, including Elon Reeve Musk, will come up with a full house. Translated, Volkswagen stands for “car of the people”, and that is what the ‘ID.3’ is supposed to be. The electric car for millionaires is already available: Porsche, a brand that is part of Volkswagen Group, is offering the Taycan.

In the past months, Volkswagen resolved software issues connected to its new product. Now they are ready to go. In three months from now, starting in mid-September, the first ‘ID.3’s will be delivered to customers, which means the new era is dawning right now.

Volkswagen does not only want to offer a neat electric car, but become the leader again. Within a few years, the Germans intend to build 1.5 million ‘ID.3’s per year. A big success of this kind is not only on the wish list of high-ranking VW managers, but also necessary.

First, Mr. Musk challenged them. Then Mrs. Corona turned everything into a mess. ‘ID.3’ is supposed to get VW back on the fast lane. Until 2024, the company will invest 33 billion Euro (37.4 billion U.S. Dollars or 29.5 billion Pounds Sterling) into electric mobility. That should be enough to create impressive products.

The good news is that the ‘ID.3’ is attractive indeed. Even though it seems compact from the outside, it has as much room as the VW Passat. It is equipped well, powerful and agile. In the ‘ID.3’s interior, nobody will ever forget they are sitting in a Volkswagen, meaning it seems familiar.

A screen for the speedometer, the navigation system and other functions is located right in front of the driver. The second display in the middle contains everything having to do with comfort, connectivity and entertainment. People will feel well in the ‘ID.3’. It’s a foregone conclusion.

There is something neither German nor French or Japanese electric car manufacturers have gotten right for a while, namely the range. Of course, the ‘ID.3’ is going to change this aspect too. While the most inexpensive version is supposed to do 350 kilometers (217 miles) before it runs out of juice, the top version will drive 500 km (311 miles) in one go, according to Volkswagen.

Next week, customers who have pre-ordered ‘ID.3’s will be allowed to sign their purchase agreements. In July, anyone may order the third revolution. The ‘ID.3’ First Edition, the best one with the biggest range, will reportedly cost below 40,000 Euro (below 45,362 Dollars or 35,814 Pounds) without extras, while the base model will sell for 30,000 Euro (34,036 Dollars or 26,861 Pounds). This aspect will make Tesla managers think.

The buyer’s premium the German government promised anyone who purchases an electric car applies to both the Model 3 and the ‘ID.3’. Except the American vehicle’s base edition costs a lot more, namely 44,000 Euro (49,920 Dollars or 39,406 Pounds). And in this price range, the premium is lower. Who laughing now? The same people, but for a different reason.