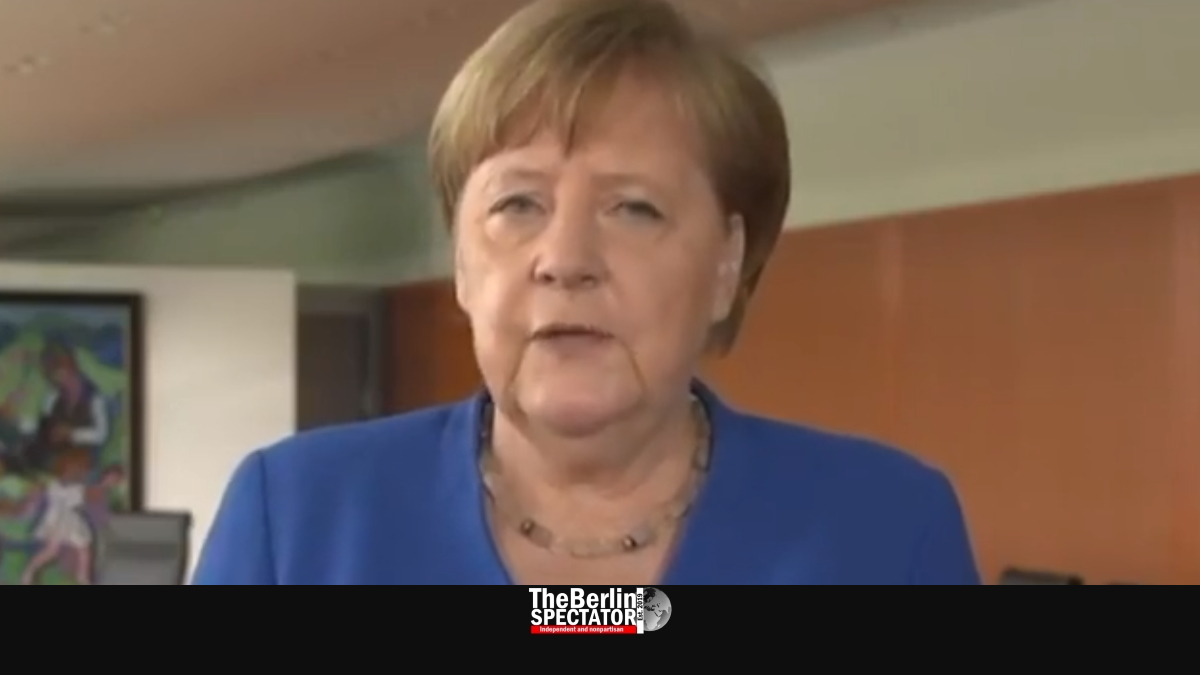 The American Jewish Committee (AJC) was going to hold its Global Forum conference in Berlin this year, 75 years after the liberation of Auschwitz and the Allies’ defeat over Nazi Germany. Because of Corona, the event is taking place online. Chancellor Angela Merkel addressed its guests on Sunday.

“The fact that the AJC was going to hold its Global Forum in Berlin this time touched me”, Chancellor Angela Merkel told the participants of the event, which had to be turned into a virtual one because of the Corona pandemic. She said the American Jewish Committee’s decision for Berlin had been taken in the 75th year after the end of the Shoa, “the betrayal of all civilized values.”

Angela Merkel called this aspect “a generous gesture of trust and close attachment”. She reminded the Global Forum that the AJC was the first Jewish organization to seek contact with the Federal Republic of Germany after the Holocaust, the most terrible crime in human history. For that, she was “profoundly grateful and humbled”, the Chancellor said.

Over the years, the readiness to engage in dialog and seek reconciliation had turned into a close partnership by now, the German head of government stated. “We are aware of our responsibility regarding the remembrance of millions of Jewish children, women and men who were stripped of their rights, persecuted and murdered by Germans during the Shoah”, Mrs. Merkel said in her recorded greeting to the AJC.

“We are also aware of our responsibility to take action against all forms of antisemitism in a decisive manner”, the Chancellor continued. This was part of Germany’s raison d’etat. Antisemitism was not compatible with German values, she stated. Neither were racism or hate speech.

Bitter setbacks had been experienced in the fight against hatred in Germany. Angela Merkel mentioned the Halle attack during which two people were murdered by a Nazi. Had he managed to open the door to the Synagogue of Halle on Yom Kippur, a Jewish high holiday which was observed there on October 9th, 2019, the shooter would probably have killed many congregation members. The synagogue was unprotected, meaning there was no police.

Merkel said this attack had “shocked us to the core.” She added that “despicable attacks of that kind” targeted “the very heart of our democracy.” Germany’s society was based on cultural and religious diversity and tolerance. Jews needed to feel free and safe in Germany, and they had to be able to practice their faith and culture openly, Merkel told the American Jewish Committee and the participants of its Global Forum.

“Our responsibility involves standing up for Israel’s security”, Angela Merkel stated. This aspect was non-negotiable. A lasting peace in the Middle East was only achievable through negotiations and a two-state solution. Mrs. Merkel keeps on stressing this point. Israel has supported and worked for a two-state solution for decades. It could not be implemented because the Palestinian leaders have rejected all partition and peace plans since 1948, while Israel agreed to all of them.

“In awareness of our responsibility, we cannot be neutral”, she said. In the quest for democracy and human rights, both in Germany and around the world, strong partners were needed. The American Jewish Committee was one of them. Angela Merkel thanked the organization for its “tireless efforts to promote peace and interfaith rapprochement.”

The United States of America’s Secretary of State Mike Pompeo was among the speakers of the Global Forum as well. He said he truly admired “the crucial work the AJC is doing to fight back” against the rising antisemitism.

The AJC was founded 113 years ago, in 1906. It is one of the most important Jewish advocacy organizations in the world.