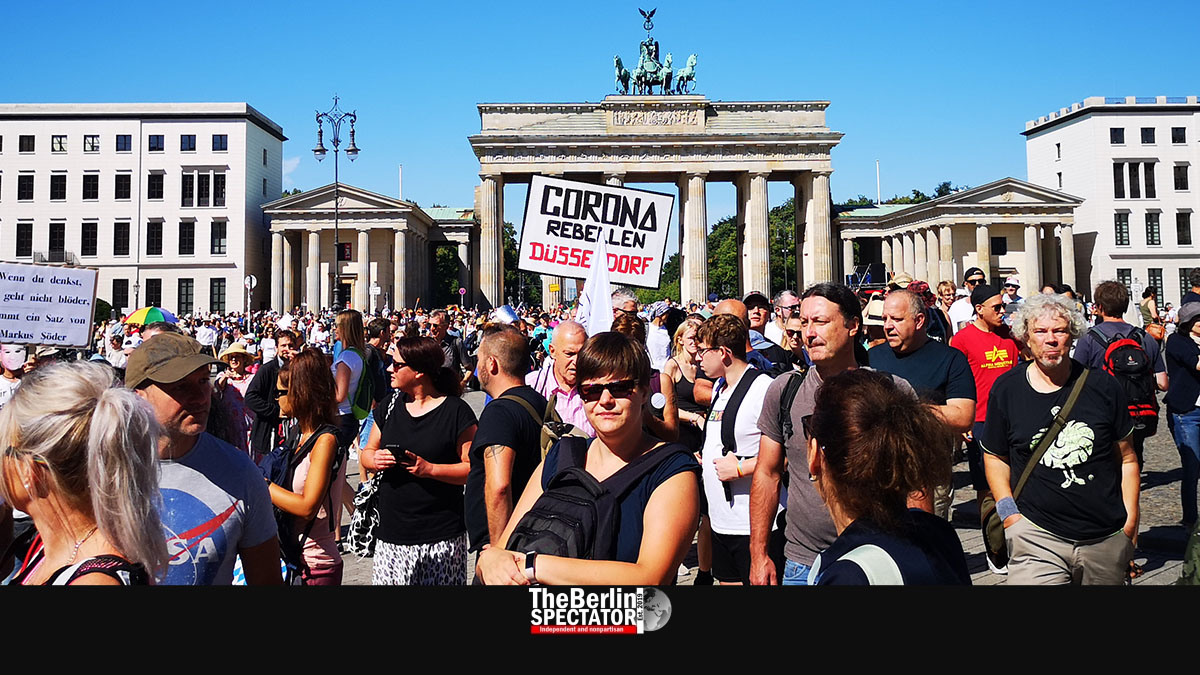 Thousands of Corona deniers were going to be back on the streets of Berlin on Saturday. They announced an ‘Assembly of Freedom’ against the government’s Corona measures. The authorities just forbade the event.

A protest of Corona deniers with 22,500 participants was registered with the Berlin Police Department. It was supposed to take place on Saturday in Berlin’s former Eastern city center. In addition, a ‘protest camp’ and a rally in the afternoon had been announced.

Just four weeks earlier, on August 1st, the initiative ‘Querdenken 711’ from Stuttgart had staged a similar protest in the German capital. Hardly any participant had worn a protective mask. The distance rule was ignored as well. Afterwards, politicians had criticized the participants for endangering not only themselves, but also everyone else.

There was another big problem: The movement of Corona deniers is a forum for Nazis and other haters. Last time, famous personalities from that category joined along with their followers. Corona denier protests, as they happened in Stuttgart and Berlin, are a danger to democracy, the authorities believe.

Because of the involvement of conspiracy theorists, antisemites, Holocaust deniers, Islamophobic individuals and Nazis, Germany’s Federal Office for the Protection of the Constitution is warning of dangerous tendencies. So is Berlin’s Senator of the Interior, Andreas Geisel.

“There is a threat against the Liberal Democratic Basic Order”, he told the ‘Tagesspiegel’ daily. It is part of the German constitution and defines the country’s democracy. “This is not about criticism regarding decisions the government had to take in times of a pandemic anymore.”

But the reason Geisel’s Senate Administration forbade the protest is that Corona deniers do not wear masks. Their last demonstration on August 1st had shown what had to be expected, a statement said.

Before the rally was forbidden, Senator Geisel had commented on political aspects as well. He had said individuals who rallied with right-wing extremists would lose any legitimization in regard to a democratic exchange of opinions. The Berlin Police Department he is heading with Police Chief Barbara Slowik had announced a large scale operation for Saturday.

On August 1st, the police had ended the Corona deniers’ protest march and a separate rally early because of the participants’ failure to adhere to the Corona rules.

After the last Corona denier protest, its organizers had said they had pulled 1.2 million participants, even though there had been 20,000 people only, according to the Berlin Police Department. At their last rally in Stuttgart, only a few thousand protesters appeared.

In Berlin, several counter demonstrations were registered with the Police Department for Saturday. It is unclear how many of them will still take place.