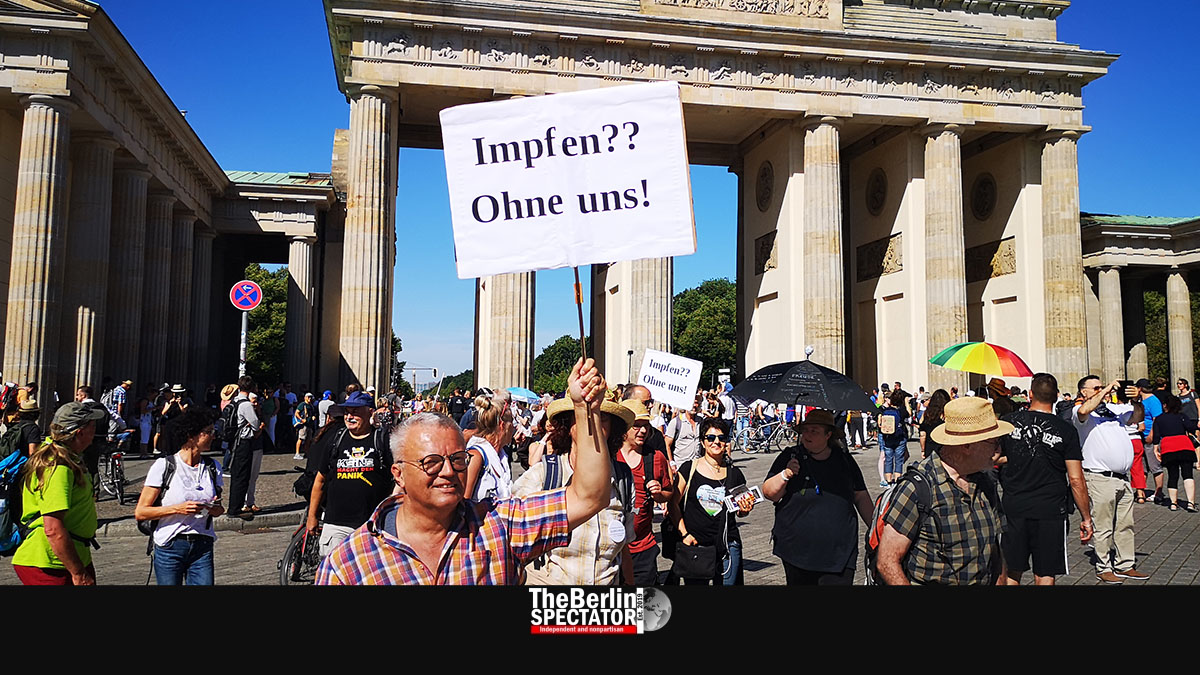 The High Administrative Court in Berlin gave the ‘Querdenken 711’ movement of Corona deniers the right to stage the protests they had registered for today. An earlier court verdict was confirmed on Friday night.

A ban the Berlin Police had imposed on protests Corona deniers had registered for today in Berlin was annulled by Berlin’s High Administrative Court late on Friday. What this means is that the rallies may go ahead. ‘Querdenken 711’, a movement founded in Stuttgart, is behind the events.

The official reason for banning the demonstrations had been the assumption that their participants would likely not follow the Corona rules, by refraining from keeping their distance to each other and by not wearing masks. This is exactly what had happened on August 1st, when the ‘Querdenken 711’ movement had staged protests in Berlin before.

Back then, four weeks ago, police ended the events early for the same reasons. Back then, participants verbally attacked reporters and other persons for wearing masks. The main issue was that their behavior endangered themselves, their families and everyone else.

Participants of ‘Querdenken 711’ spread more conspiracy theories. According to those, Microsoft founder Bill Gates intends to vaccinate the world population and implant microchips into all human beings. In early August and on several other occasions, Nazis and other haters joined the protests and spread antisemitic and racist propaganda. This time, Nazi organizations told their followers to take part in those protests again on several Internet platforms.

In spite of the ban it had imposed on the Corona denier protests, the Berlin Police Department prepared for those rallies today because those in charge knew the ban was shaky from a legal perspective. It had drawn criticism, mainly from the far left and the far right, but also from democratic voices who believe the ban was a strategic mistake.

Now that the Corona denier protests may go ahead in spite of it all, the Berlin Police Department intends to deploy 3,000 officers. Reinforcements by Germany’s Federal Police and colleagues from other federal states will be on duty as well.

Now that ‘Querdenken 711’ won at the courts, the conflict will take place on the streets of Berlin. Even if the courts had confirmed the ban, the police would have been confronted with issues because the deniers had registered thousands of additional protests for today in order to confuse the authorities. At least some conspiracy theorists would have hit the streets anyway.

Earlier this week, Berlin’s Interior Senator Andreas Geisel had justified the ban by saying the August 1st protests had shown that the Corona deniers were not ready to wear masks or adhere to any Corona rules. Also he had stated that he did not want Berlin to become “a stage for Corona deniers, ‘Reichsbürger’ and right-wing extremists” again. That is exactly what the city will be.

‘Reichsbürger’ are self-proclaimed ‘Citizens of the Reich’ who do not recognize the authorities or the Federal Republic of Germany. They are among the protesters Berlin and the police will be confronted with today. First, a protest march in Berlin’s Mitte district is scheduled. In the afternoon, the Corona deniers and their Nazi partners will stage a rally on ‘Strasse des 17 Juni’ at Brandenburg Gate.