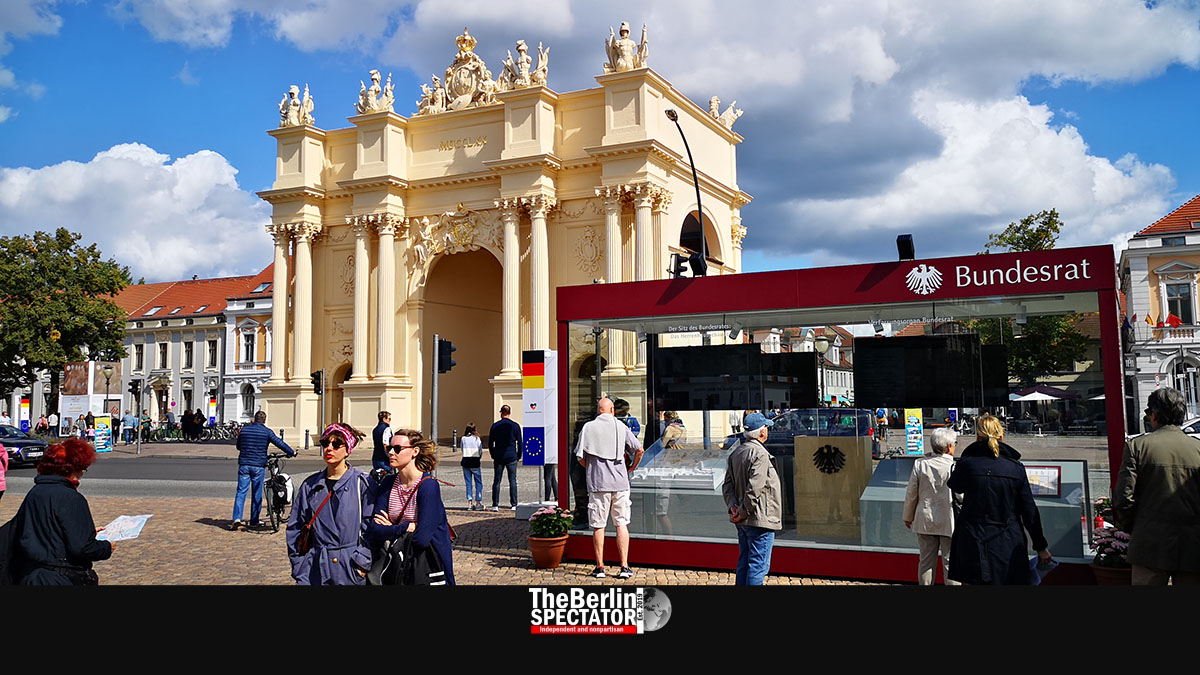 Thirty years after Germany’s reunification, the Unity Expo was opened in Potsdam this past weekend. It shows what happened in the past 30 years, in 30 glass boxes anyone can take a look at.

Contrary to its name, the German Democratic Republic (GDR) was not democratic. It became part of the democratic Federal Republic of Germany on October 3rd, 1990. This happened eleven months after the Berlin Wall fell, 29 years after it was built, and 45 years after the Allies finally ended fascism and the Holocaust by defeating Nazi Germany.

Today, the almost 13 million Germans who are 30 years old or younger never lived in any of the two German states while they existed next to each other. They just hear stories about divided Germany from their families or at school. To many of those who do remember the inner-German border, time has raced by since.

In less than a month from now, on October 3rd, 2020, the 30th anniversary of Germany’s reunification will be celebrated at Metropolis Hall in Potsdam, the picturesque capital of Brandenburg, located just outside Berlin. Germany’s President Frank-Walter Steinmeier and Brandenburg’s First Minister Dietmar Woidke will be welcoming a total of 240 guests.

Without Corona, the 30th Unity Day celebration would have been a lot bigger, with about six times as many guests. And the Unity Expo, which was opened this past weekend, would have been shorter. Because of the Corona pandemic, it was extended and reorganized, so that people would be able to see it, but keep their distance at the same time.

Under normal circumstances, Germany’s federal states would have welcomed visitors in big tents. Everyone would have gotten little treats and beverages, souvenirs and booklets. People would have listened to speeches, live music and what not. Those celebrations would have lasted for a week.

Due to Corona, the Unity Expo lasts for a month. Recently, First Minister Woidke and his team of organizers “made a virtue out of necessity”, as he put it. Visitors are supposed to keep their distance and adhere to all other Corona rules, such as wearing masks when they get to close to other people. But they will have more time to look at the outdoor Expo.

Each of the sixteen federal states has a ship container-sized glass box or two in which they present anything typical from their turf. For instance, Hamburg included a little installation of the Elbe river and the riverbank beach. Schleswig-Holstein and Mecklenburg-Hither Pomerania show real beaches, at the North and Baltic Seas.

The Constitutional Court in a Box

Rhineland-Palatinate turned the world upside down in its glass box. Brandenburg, the host, came up with garden goblins, while Saxony-Anhalt added more philosophic content to its box. Hesse refrained from using a glass box and installed six big letters instead: H, E, S, S, E, N. ‘Hessen’ is Hesse in German.

Apart from the federal states, the Bundestag, the German parliament in Berlin, the Bundesrat, which is the legislative body that represents the federal states, and even Germany’s Federal Constitutional Court, one of the country’s most important institutions, filled glass boxes. But the most interesting one was contributed by President Steinmeier.

His glass box has two big screens, one on each side. Steinmeier picked thirty Germans he actually knows. In video clips, they talk about what Germany’s reunification means to them. The Holocaust survivor Margot Friedländer, one of Berlin’s Honorary Citizens, is part of the group of 30.

So are the German astronaut Alexander Gerst, authors, mayors, NGO representatives and activists, journalists, a musician, a student, a sportsman with African roots and Mevlüde Genç, a mother who lost five family members in a terror act committed by Nazis in Solingen. It happened three years after the reunification.

Reflecting on Freedom and Life

Furthermore, 22 information boxes were spread all over Potsdam’s city center. They deliver some recent history in videos. What happened since 1990? This question is being answered in many ways. On top of it all, a giant German flag in stripes can be looked at, and of course Potsdam’s beauty.

To those who live close-by, for instance in a free city called Berlin, this is a good opportunity to take a nice walk through Potsdam and to reflect on the reunification, on democracy and freedom, on facts and fiction, on autocrats, democrats, viruses, vaccinations, the world and life.