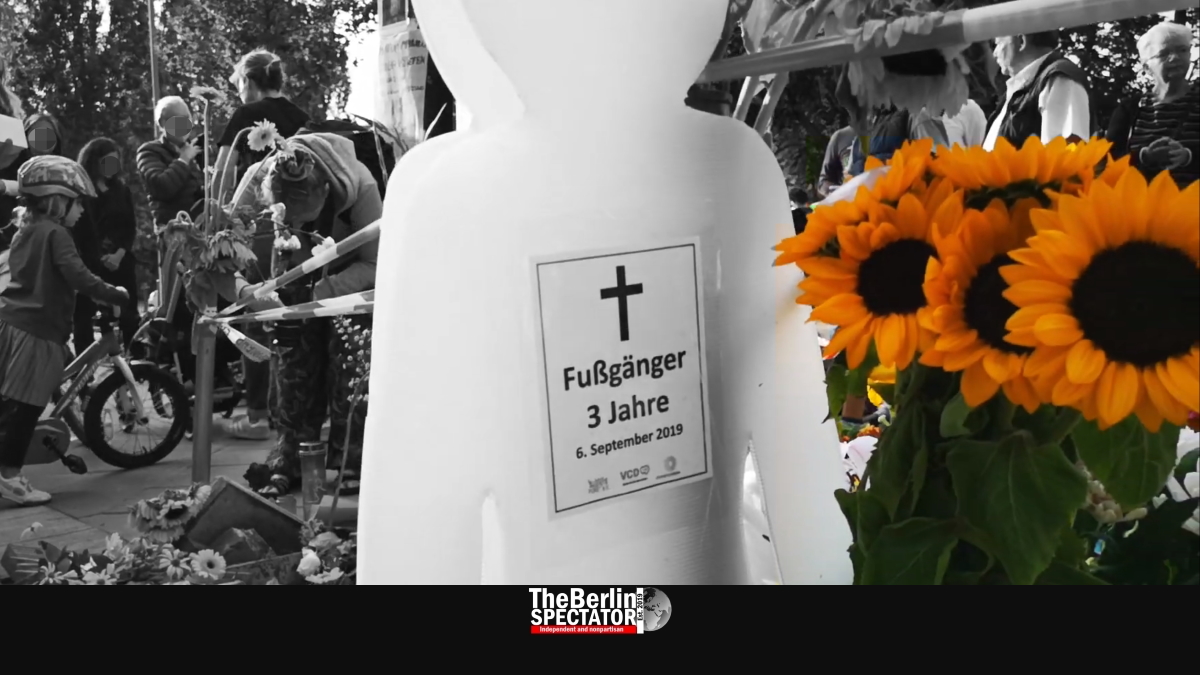 A year ago, four pedestrians died on a sidewalk in Berlin, at an intersection local residents say is dangerous. Now the Berlin Senate announced it would have wide bike lanes installed, along with protective bollards.

It happened on Invalidenstrasse, at the intersection with Ackerstrasse, a year ago. On Friday, September 6th, 2019, it was about 7:00 p.m., four persons were present on the sidewalk, in front of a construction fence. A dashcam video shows them, just seconds before their sudden death.

They were two men in their twenties, as well as a 3-year-old boy and his grandmother. His parents were a few steps away when it happened. The driver of a Porsche Macan overtook several vehicles that waited in front of a red traffic light. The next moment, the SUV knocked down the four victims at high speed. They died instantly.

This was one of those accidents that shocked and angered the entire city. Why would any motorist just race into pedestrians on the sidewalk? For weeks, the victim’s friends and relatives came to the intersection every day. A shrine with flowers and photos was set up for the victims.

In their anger, some Berliners demanded a ban on SUVs in the entire city. At that moment, they did not see that the kind of vehicle the causer drove was not to blame. It could have happened with a small size vehicle or a limousine instead. Something else went very wrong.

Yesterday, on Sunday, people were back at the very same intersection for a vigil. They demanded changes in the traffic guidance. Local residents say the intersection had always been dangerous. Shortly after the accident, they started calling for a speed limit of 30 km/h (19 mph) and other measures.

These kinds of demands seemed reasonable at a rather chaotic spot at which pedestrians and cyclists were in harm’s way all the time. A while ago, the Senate implemented a 30 km/h zone at the site of the accident. According to the ‘Tagesspiegel’ daily, bike lanes on both sides of Invalidenstrasse, with protective bollards, will be installed next month.

What the cause of the accident is concerned, a preliminary one was announced on October 16th, 2019. Back then, a spokesman for the Berlin Prosecution stated, the 42-year-old driver had suffered an epileptic seizure just before he had raced into the victims on the sidewalk.

The investigation has been going on for a year now. Involuntary manslaughter will probably be the charge against the causer. Investigators are trying to find out whether the man could have foreseen his seizure and his reaction to it, namely stepping on the accelerator instead of the brake.

Indeed, there are some open questions, including this one: Why did the driver not crash into the cars that waited at the red light, but bypass them? If he had enough control over his body to do that, in spite of the seizure, why did he not steer the car away from those pedestrians too?

The Berlin Spectator received an anonymous e-mail the author of which claims the causer was organizing illegal racing events on public roads. This could not be confirmed. Another claim, according to which the braking lights of the Porsche Macan were lit before the crash, could not be confirmed either. The dashcam video mentioned does not show lit brake lights. If they were lit the moment the vehicle crashed into a traffic light and the victims, a moment not covered by the published version of the video, an automatic emergency break might have been triggered.

In the meantime, many Berliners are waiting for the trial to finally happen. But, according to the Prosecution, the investigation takes time.

One thing is certain: Seldomly has an accident angered Berliners this much in the past years. There is one exception though: In January of 2018, a young woman was killed in her car, when it was hit by a police vehicle. The cop who drove it was reportedly intoxicated. So far, there is no closure in this case either.