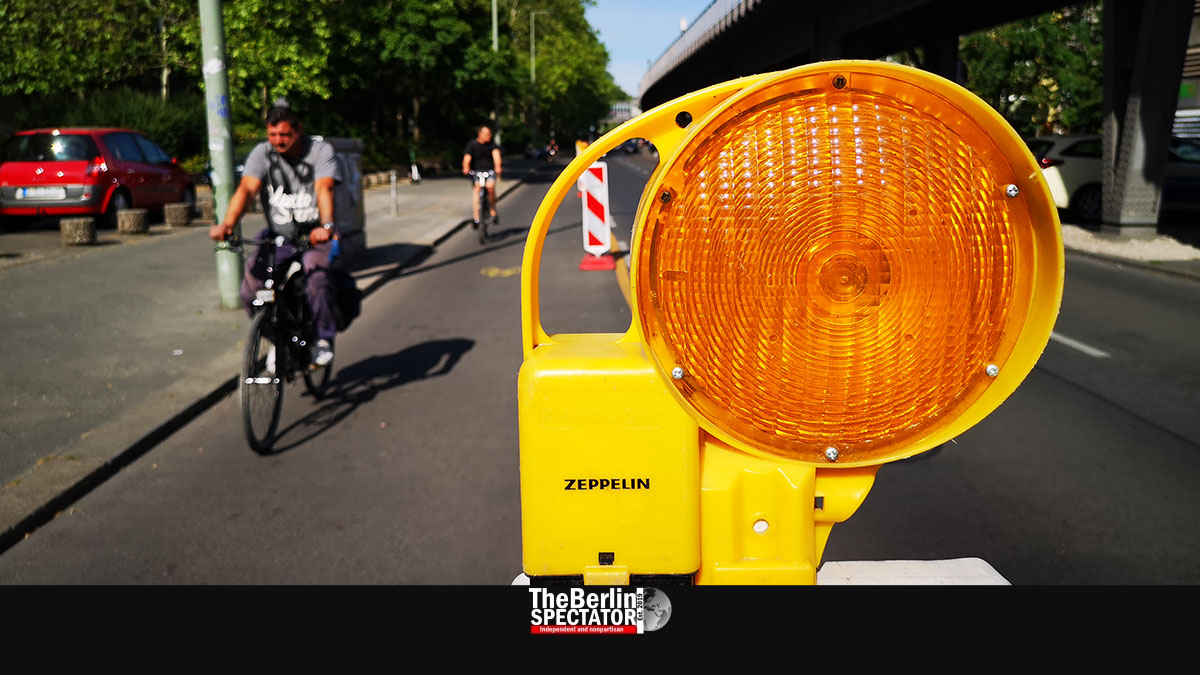 Berlin’s ‘pop-up bike lanes’ that were installed during the first part of the Corona crisis in spring are unlawful, according to the city state’s Administrative Court. The Senate might need to get rid of them.

In late March, wenn street life basically came to a halt because of the Corona pandemic, the Berlin Senate hat makeshift bicycle lanes installed on major streets in several districts. Those ‘pop-up bike lanes’ quickly multiplied. At this stage, there are a total of eight of them. Soon, their number might be zero.

For instance, they can be found on Kottbusser Damm, Skalitzer Strasse and Glitschiner Strasse in Kreuzberg. Those lanes are relatively wide. Cyclists who use them are being protected by signs that are usually being used to mark construction sites. Bicyclists feel safe on those lanes, but not all motorists believe they should take away their lanes.

A member of the Berlin House of Representatives who is a member of the extremist right-wing AfD sued the Senate in June. The court approved his urgent motion today. At this very moment, the decision is not legally valid, but it will be. The only chance the Senate has is the Higher Administrative Court, which could either sack or confirm the first verdict.

On Monday afternoon, the Senate announced it would fight the decision, while the opposition slammed Senator Günther. She had made a fool of herself, the conservative CDU’s Kai Wegner said.

Transport Senator Regine Günther, a member of the Greens, had wanted to “ensure system-relevant mobility” when the crisis hit, according to the court. To her opinion, those ‘pop-up bike lanes’ were justified by the fact that most Berlin residents do not own cars. And keeping one’s distance in public transport is not really possible. That is why she had the bike lanes installed.

The court obviously has a different perspective. It said there were “considerable doubts regarding the lawfulness” of those lanes. The legal requirements had not been given. Therefore, the Senate’s Transport Administration needed to have the lanes removed along with those signs and markings. Of course, the AfD is happy.

Berlin does not only have ‘pop-up bike lanes’, but hundreds of miles of old, narrow ones on many sidewalks, as well as a few modern and wide ones in several districts. Most of those are painted in green and they are being protected from cars and trucks with bollards.

The city state of Berlin is being ruled by a center-left coalition consisting of the Social Democrats (SPD), the Greens and ‘The Left’. Especially the Greens keep on talking about a “traffic transition”, about bicycle highways and similar ideas.

Recently, part of Friedrichstrasse, one of the most famous steets in Berlin, was turned into a temporary pedestrian zone with bike lanes.